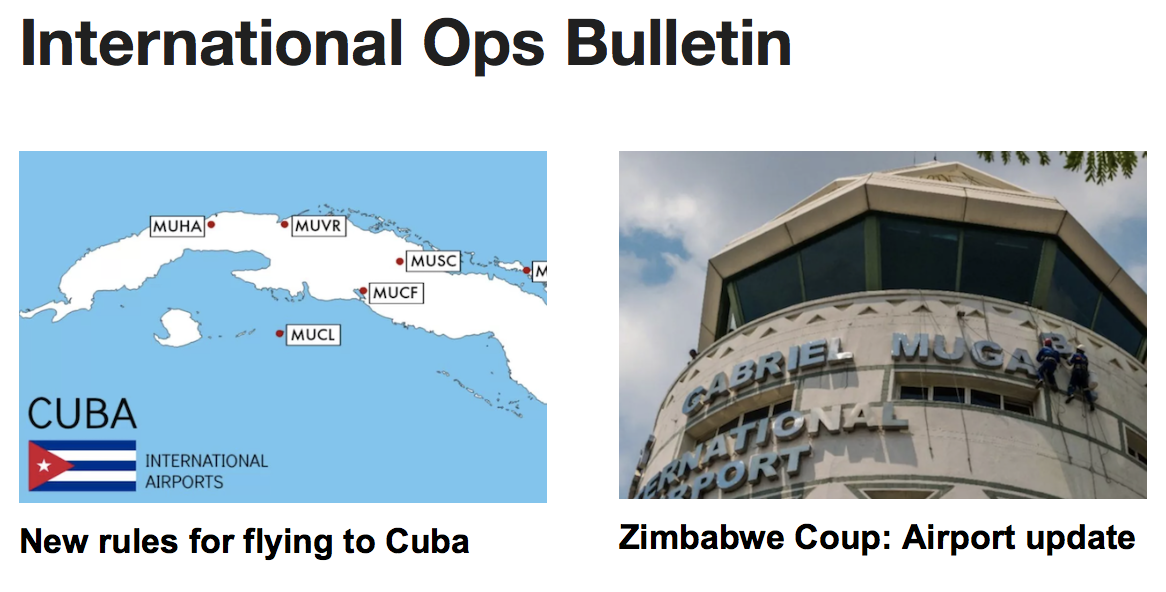 LFZZ/France ATC Strike ongoing. Impact: latest on the Eurocontrol NOP, this little French ATC page, as well as in OpsGroup Slack. Reroutes: Shanwick says: T9 and T213 available for suitably equipped aircraft. Algeria says: Algerian airspace available without special permission but file FPL to DAAAZQZX. Tunisia says: Tunisian airspace available without special permission but file FPL to DTTCZQZX and DTTCZRZX. Read full article.OYSN/Sanaa The Saudi Coalition bombed the airport on Tuesday, which is currently controlled by rebel forces. VOR/DME destroyed. UN staff report runway, taxiway, ramp, terminal and ATC tower not hit and in good condition. The Coalition closed the airport in August 2016 to all but a few UN aid flights. The Saudi coalition have allowed OYAA/Aden Airport to re-open today, after it was closed following the missile strike on Riyadh Nov 4.

CYYR/Goose Bay One runway has been returned to full service (16/34, 9580ft), following a problem last week with sealant which caused it to be sticky in places. Cleanup will now commence on the second runway (08/26), although there is no timeline for its reopening.

DAAG/Algiers There will only be one runway in operation from now until Feb. Expect delays at peak times.

ZKZZ/North Korea Mainstream media says “tensions are high” in the region, with potential for another missile launch. Maybe. At the very least, read up on where these missiles have been ending up in the Sea of Japan. We suggest you read the FSB original version rather than the somewhat sensational Daily Express version of our guidance.

ZZZZ/Worldwide Couple of scam warnings, to keep you out of trouble this week. First, if you haven’t gotten a fake Eurocontrol invoice, you’ll get one soon. Check carefully. The real ones come from eurocontrol.int. The others will send your money to Nigeria. Second, if you’re a contract pilot, and the rate you’re getting for a new gig seems to good to be true, it is. If it’s an LN- reg Hawker 800 out of LFML, they want your bank details and the direction of funds won’t be in your favour. Know of more? Tell us.

WADD/Denpasar Volcanic activity at Bali’s Mount Agung has decreased, but an eruption remains possible. When it does erupt, WADD/Denpasar will close, and the Indonesian authorities will turn to their contingency plan they have prepared to divert international traffic to other airports. Scheduled operators are still carrying additional divert fuel into WADD.

KZZZ/USA The FAA has published a ton of information on Thanksgiving and Snowbird routes for the upcoming holiday season. Everything you might need is here.

EGGW/Luton As runway repair work continues, the airport will be closed to all movements overnight from 0000-0530z until Dec 6, and then again from Jan 6-14.

KZZZ/USA The FAA has updated the rules for EFB’s, new AC here. Key change is it is now allowing “Own Ship” display, ie. geo-referencing of your position onto a chart. Have a read.

HKJK/Nairobi Possible delays tomorrow (Friday). Large public rally planned in the city to welcome home a Kenyan politician. Supporters plan to march to the airport on Friday morning to receive him. Expect heightened security at the airport and travel delays to the city.

NZAA/Auckland only has one runway – 05R/23L – and they’re going to be upgrading its ILS. So from Dec-Feb, there’ll be no ILS on 23L, and then from Mar-Apr there’ll be no ILS on 05R. Look out for Notams which will be published soon witht the exact dates of the closures. VOR/DME and RNAV approaches will still be available throughout.

SPZZ/Peru With the rainy season about to begin, a preventive state of emergency has been declared for the next 60 days, for pretty much the entire region from SPJC/Lima up to the border with Ecuador in the north.

HUEN/Entebbe A criminal ring operating at the airport has been stopped. The ring included senior members of the police force, 8 officers arrested. Immigration, clearing and cargo handling crew members were also involved in the illegal activities, including drug smuggling, human trafficking, the sale of rhino horns, aiding and abetting tax evasion and extorting money from travelers.

SAZZ/Argentina An Air France crew was arrested on arrival in Argentina last month for not upgrading a passenger with government connections on the inbound flight. Sounds crazy, but they went to court. TIA = This is Argentina? Story here.

WMZZ/Malaysia The nighttime curfew in the waters of the Eastern Sabah Security Zone (Esszone) extends to 30 November. The 1800-0600 curfew, which was set to expire on 15 November, applies to seven districts in the zone, police advised people living in these districts to remain indoors during the scheduled curfew, due to the persistent threat of kidnapping by terrorists in the Sulu Sea. The curfew is intended to help law enforcement monitor vessel movements in the area in order to protect international researchers and tourists on nearby resort islands.

HKZZ/Kenya Officials are warning about a number of fake e-visa sites. The only one you should be using is the official one: http://evisa.go.ke/evisa.html

OPZZ/Pakistan On Nov 9, at bomb attack approximately 4nm east of OPQT/Quetta Airport killed 3 people. The security situation remains unpredictable across the whole of Pakistan, including the high threat of terrorist attack. The authorities have announced increased security measures in all major cities today, Nov 10, where major religious processions will be held.

FQZZ/Mozambique The national airline LAM has raised concerns about airport security in Mozambique, citing deficiencies in access control, inefficient passenger and worker scrutiny, absence of officers at checkpoints, broken scanning equipment, absence of scrutiny at some freight terminals, lack of scrutiny in VIP rooms, and lack of training in police security, adding that it was concerned that they compromised the safety and security of air passengers and crew members.

KZZZ/USA According to a bulletin from the DHS, officials believe that terrorist groups are seeking alternative methods to carry out attacks against the U.S., including drones. Some terrorist groups overseas are using battlefield experiences to pursue new technologies and tactics, such as unmanned aerial systems and chemical agents that could be used outside the conflict zones. Additionally, terrorists continue to target commercial aviation and air cargo, including with concealed explosives.

VMMC/Macau Until the end of the year, the airport’s only runway will be closed for two hours between 20-22Z each Tue, Thu & Sun.

TAPA/Antigua The runway will be closed for repair overnight Mon-Fri 0230-0900Z until the end of November.

EIDW/Dublin The longer runway (10/28) will be closed each night from 21-05Z until at least Nov 19. During these times, the shorter runway (16/34) will be open, but they’ll use 16 for both take-offs and landings – the LDA will be 1692m, and temporary runway end lights will be installed.