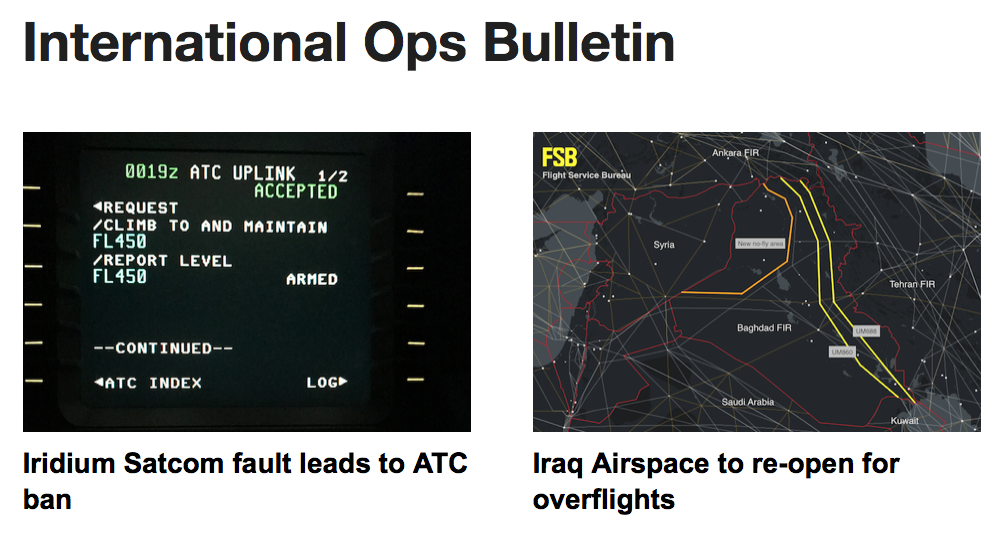 
Weekly International Ops Bulletin published by FSB for OPSGROUP covering critical changes to Airports, Airspace, ATC, Weather, Safety, Threats, Procedures, Visas. Subscribe to the short free version here, or join thousands of your Pilot/Dispatcher/ATC/CAA/Flight Ops colleagues in OPSGROUP for the full weekly bulletin, airspace warnings, Ops guides, tools, maps, group discussion, Ask-us-Anything, and a ton more! Curious? See what you get. Rated 5 stars by 125 reviews.
EGGX/Shanwick Well, Event 3 of Formidable Shield never happened, and we’re onto Event 4 – the Big One, which is set for Oct 15th at present. We’re told the likely NAT Tracks structure on Oct 15th will be from 58N down to 54N. Westbound NAT Tracks are usually active from 1130-1900z, so on Oct 15th the forecast core westbound tracks will be going straight through the closed area of airspace. The current plan is to close the tracks at 30W at 1400z, and publish a few north-south tracks in the EGGX/Shanwick and BIRD/Reykjavik FIR’s that will go around the closed area of airspace. There may also be Tracks published going south of the area through the SPPO/Santa Maria FIR. OpsGroup members keep an eye on Team comms for updates. Read the article with map.

ORBB/Baghdad FIR Overflights of Iraq may be permitted to resume as early as next week, allowing international carriers access again to several previously heavily used routes through the eastern side of the Baghdad FIR. In May of this year, SFAR 77 – banning US operators from operating within Iraqi airspace – lapsed, and was replaced by Notam KICZ 10/2017 – which had much the same wording. However, on October 3rd, Iraq issued a new Notam (A0477/17) – with a new restricted area in the northwest of the FIR, from Surface to FL460. The previous restricted areas 601 and 701 were withdrawn. This re-shuffling of restricted airspace paves the way for two major international air routes to be reopened, UM860 and UM688 – which were realigned in April for this purpose, allowing operators additional route options through the Middle East to Europe and vv. FSB expects an official announcement shortly, and will update operators further. OpsGroup members will be notified directly.

VIKG/Kishangarh Haven’t heard of this airport? That’s because it just opened up this week in India! It’s got a 2000 meter runway, and looks to be a great way to get to Marble City or grab your Bani Thani paintings. It has 6 check in counters, and can handle 150 passengers per hour.

ZBAA/Beijing Due to the 19th session of the Communist Party in Bejiing, Captial International Airport will reportedly be closed to all GA traffic not participating in the event from Oct 12-25

UUZZ/Moscow Moscow ATC moved to a new Ops Centre on Oct 10th, you might notice some changes.

TNCM/St. Maarten is open again as of Oct 10th. The first flight out was from the national carrier, Winair, to St. Eustatius and the first international flight was operated by Delta, which landed at around 1.50 pm. Still having comms issues, if you’re planning on going there anytime soon, the advice is to file your return flight plan from your point of origin. The airport operator tells us by email “ATC is operational and will provide separation and clearances for all aircraft landing into SXM Airport and flying over to neighboring islands. Security measures will be at 100% level for all areas. The terminal building is not yet operational. In the makeshift hall we will have Kiosks to accommodate a variety of concessionaire services such as food and beverage.”

LTZZ/Turkey suspended issuance of visas to US citizens on Oct 10. However, most operating crew will not be impacted. When listed on Gendec as Operating crew and you have a valid crew ID, you may stay up to 72hrs without visa.

NTZZ/Tahiti FIR has no radar services available between Oct 23-28, due to maintenance.

EGMC/London Southend A new private jet centre is opening in November, which will be open 24/7 for 364 days a year. The airport has no slot restrictions, and claims to offer faster departure routes outside of London airspace. They will also have competitive rates for landing, handling and parking – for example, to park a BBJ for 24hrs will cost £1000. The airport is under an hour’s drive to central London.

BIZZ/Reykjavik FIR They’re running a volcanic ash exercise over the next few days. You might see some scary notams get published – as long as it’s got ‘EXERCISE VOLCICE’ on it, don’t worry.

EINN/Shannon Yay! Runway repair work has been completed, and the airport is now operational 24/7 once again. You can get back to filing RALT/EINN like you did in Spring.

ORZZ/Iraq The Turkish President is now threatening to close their entire airspace border with Iraq. The Iraqi CAA have already suspended international flights to ORER and ORSU in the Kurdish autonomous region of Iraq, following a controversial referendum on independence there last month.

TJSJ/San Juan Jet Aviation’s FBO has re-opened in San Juan. They say – “Our FBO has power and water and can be reached by normal access roads. We’re providing full service including fuelling, ground handling, and aircraft service and parking on our ramp. We are operating with email fboservices@pazosfbopr.com and cell-phone service (+1 787 399 3260 or +1 787 923 8259) and are taking reservations and service requests from customers. The FBO is operating seven days a week, 5am to 12am. midnight. Flights after midnight will be coordinated on an individual request basis.”

EZZZ/Europe What’s the latest on US operators and using MMEL vs MEL in Europe. The issue was a big one before the summer, but we haven’t heard anything of late, and people are asking. Can you help? Tell team@fsbureau.org.

ENSB/Svalbard This is now officially a domestic airport – international arrivals are no longer permitted. However, the ATC tower at the airport say that you can still use ENSB as an emergency divert, as long as they are open (06-14z). Norway CAA say international charter flights may still be allowed “in the interests of tourism”, but it seems this will be the exception rather than the rule. They’ve done this because the airport is apparently “not in line with the standards of an international airport”. So now, if you want to go to Svalbard you will first have to go to one of Norway’s international airports to clear customs, and then continue on to Svalbard as a domestic flight. Interestingly, you can still fly to ENSB direct from Russia, as they have a separate agreement from 1974 regarding the use of  the airport – which is unaffected by this new rule. Even more interesting is that when you get to Svalbard, if you decide to leave the main town of Longyearbyen, it is a legal requirement to carry a gun, and to know how to use it – they’re not joking about those polar bears.