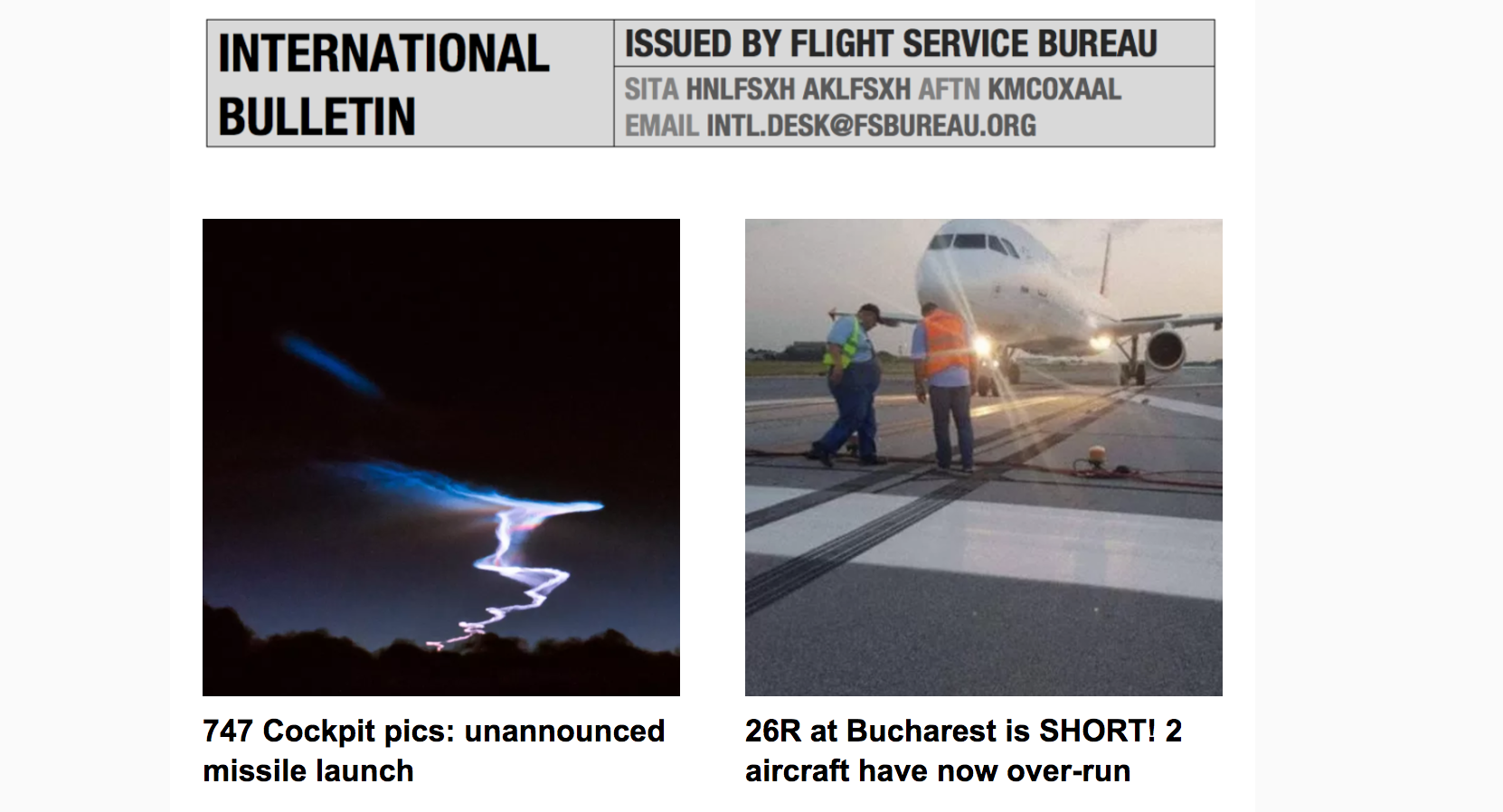 28JUL ZKZZ/North Korea Another ballistic missile was fired by North Korea today, landing in Japanese waters. Earlier this week, a B747 crew enroute to Baku captured a series of images of an unannounced missile launch close to their aircraft, over China. Read the article.

26R at Bucharest is SHORT! 2 aircraft have now over-run

28JUL LROP/Bucharest Runway 26R is shortened by about 1250m/4000 feet, and on Tuesday a Ryanair 737 became the second aircraft to run off the end in a couple of weeks: on June 22, a Turkish A321 did the same thing. Word on the street is that there isn’t much in the Notams to remind you of this. Read the article.

SVZZ/Venezuela The U.S. Department of State has updated its travel warning for Venezuela, warning against travel due to social unrest, violent crime, and pervasive food and medicine shortages. On July 27, the Department ordered the departure of family members and authorized the voluntary departure of U.S. government employees from the U.S. Embassy in Caracas. For flight ops to Venezuela, it’s highly recommended to avoid tech stops or unnecessary visits to any SV** locations.

FEFF/Bangui has had a few interruptions to ATC service due to power cuts – not the only issue in Bangui, but another reason to think twice about travel to the Central African Republic.

OEZZ/Saudi Arabia On 27 July, Saudi air defences shot down a Houthi ballistic missile in the sky over Taif. Reports indicate that the Yemeni-based Houthi rebels fired the missile from northern Yemen; however, the precise target is unclear. The interception did not result in any casualties or damage on the ground.

VTBB/Bangkok Extra holding fuel into Bangkok is recommended for the monsoon season until end of October.

EDDK/Cologne Don’t use this as an alternate overnight – at their request – that is, from 2000Z-0400Z. [more in Aireport]

LFMP/Perpignan Air show on, check for arrival slot and parking availability if you’re planning to use it between 28-30 July.

LDZZ/Croatia Several hundred taxi drivers are staging protests throughout Croatia on 28 July against the ride-sharing service Uber. Reports indicate that the protests have disrupted traffic in Dubrovnik, as well as around the airports in Split and Zagreb. Thus far there have been no reports of associated violence.

MMMX/Mexico City They’re planning on building a new airport near Mexico City. The outlines of the runway have already been painted onto the surface of a dry lake in the exact position it will be built, including full markings. These are all clearly visible when departing from the existing Mexico City Airport (MMMX) RWY 05 and approaching on RWY 23. These painted lake bed surfaces are not intended for use as a runway!

CYYZ/Toronto Pearson Ground crew workers launched a strike on 27 July over a labor dispute with their employer, Swissport. Reports indicate that approximately 700 workers — including baggage handlers, cargo handlers and cabin cleaners – are participating in the strike. Swissport serves 30 airlines at Pearson.

KZZZ/USA Qualifying citizens of India are now eligible to apply for Global Entry membership. Applicants who meet program requirements and pass a background check can benefit from expedited entry to the United States at designated airports.

UBBB/Baku If you’re headed down Baku way – be aware that they are pretty much out of fuel. Check latest.

EYVI/Vilnius is closed from 14 July – 17 August due to the reconstruction of the runway. The most suitable alternate is EYKA/Kaunas, but also consider EYSA, EYPA, EVLA, EVRA.

CYFB/Frobisher Bay has multiple closures and restrictions on going, check before using this as your NAT enroute alternate or tech stop.

FAOR/Johannesburg Another robbery occured on July 8 in a process that is becoming common here: Armed robbers followed a couple from the terminal and forced the victims to stop their vehicle in Centurion, on the corner of Rietvlei Dam Street and Delmas Road, and proceeded to steal belongings. The victims were not injured.

ENGM/Oslo From July 17-August 2, if you’re bringing your 777, 787, 330, or other Code E or larger aircraft to Oslo, plan on not getting fuel there, due to work on fuel pits and pipes – carry onwards fuel.