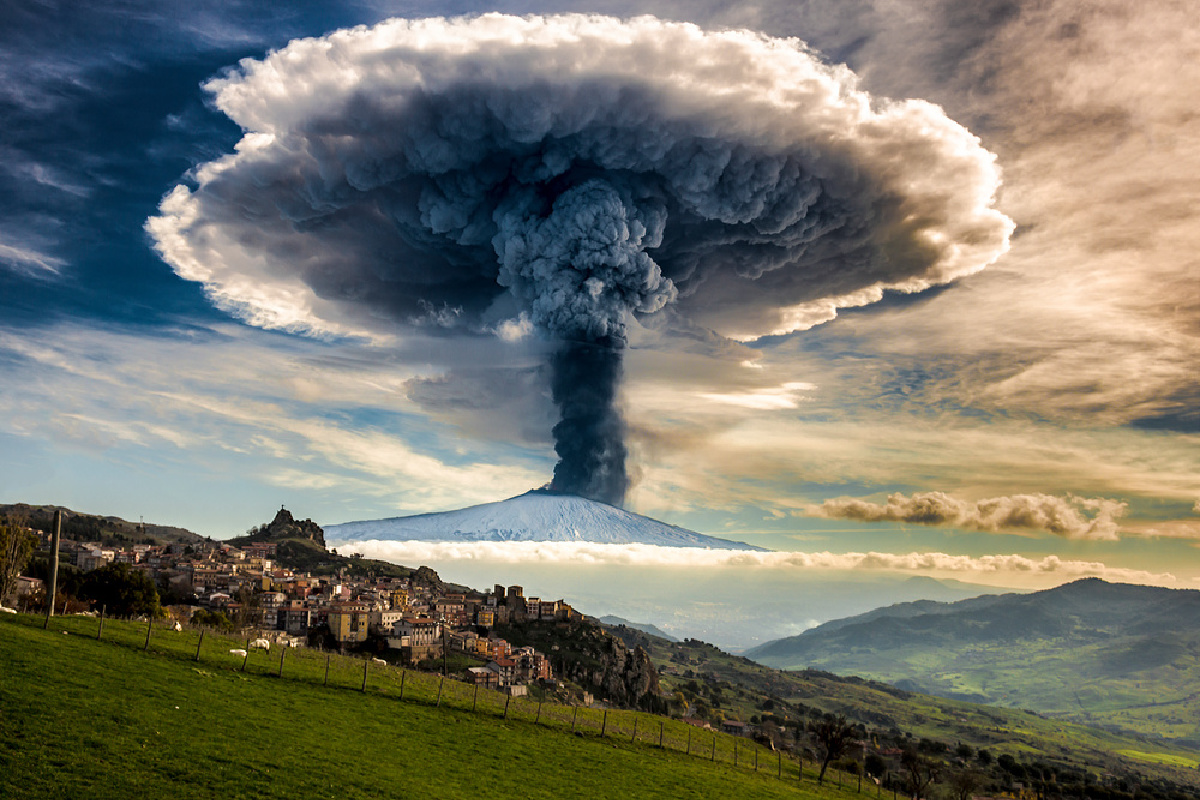 
One of the rowdy Icelandic volcanoes is at it again. Earlier this month, the Icelandic Met Office changed the aptly named Grímsvötn to a ‘Code Yellow’ after it started showing high levels of activity.. There has also been a fair amount of action in the Pacific Rim, and even Mount Etna has been rumbling…

Why is volcanic ash so dangerous?

For starters, it is not the same thing as smoke.

Volcanoes are on the ground, airplanes are in the air, but unfortunately volcanoes spit out loads of hot, nasty stuff and they tend to spit it rather high. That hot, nasty stuff is a mixture of glass, rock and mineral particles, and it is really fine – the diameter of a particle measuring less than 2mm. It is also very porous meaning it weighs next to nothing and is easily carried along on the wind.

Once the ash cloud starts to spread it, it can be very hard to spot – even a fairly dense ash cloud is unlikely to show up on your weather radar because the particles are just too small.

If it is ingested into a jet engine, it will erode the compressor blades before forming a substance similar to molten glass inside the combustion chamber, and this then re-solidifies on the turbine blades. The end result can be stalling and engine failure – and you might not be able to get them going again. And if that wasn’t enough, it can also damage the flight deck windows, block pitot static systems, and get into the cabin air and damage ventilation and pressurisation systems.

So volcanic ash is to airplanes, like sand is to picnic on a beach – it gets everywhere, and pretty much ruins it.

In 1982 a British Airways 747 was en-route from London Heathrow to Auckland (with a few stops along the way). While overflying Indonesia, late into the night, their windshield began to glow an eerie shade of blue. They had unwittingly entered an ash cloud from the recently erupted Mount Galunggung. Within three  minutes, all four engines had stopped. They descended over 25,000’ and were making some pretty close-up eye contact with fish before they finally managed to get the engines running again.

In December 1989, a KLM 747 had a similar incident when en-route from Amsterdam to Tokyo, Narita. This time it was an ash cloud from the Redoubt Volcano that caused all four engines to fail. They also eventually managed to re-start and landed safely into Anchorage with no injuries, but with around 80 million dollars worth of damage to the airplane…

Okay, so what can we do about it?

For starters, understand the alerts you see in your pre-flight briefings.

To help operators plan against potential ash encounters, ICAO have helped develop a universal alerting system for aviation that uses a simple but informative colour coding to give a heads up of the activity level of volcanoes.

ICAO also coordinate several Volcanic Ash Advisor Centers (VAACs) around the world that operate under the International Airways Volcano Watch. They use a network of met stations, satellites and even reports from pilots to provide forecasts, SIGMETS and advisories to the aviation community regarding ash clouds and eruptions. In other words, they try to tell you where it is, how bad it is and if it will get worse.

So, you can plan your flights to avoid affected areas both laterally and vertically. 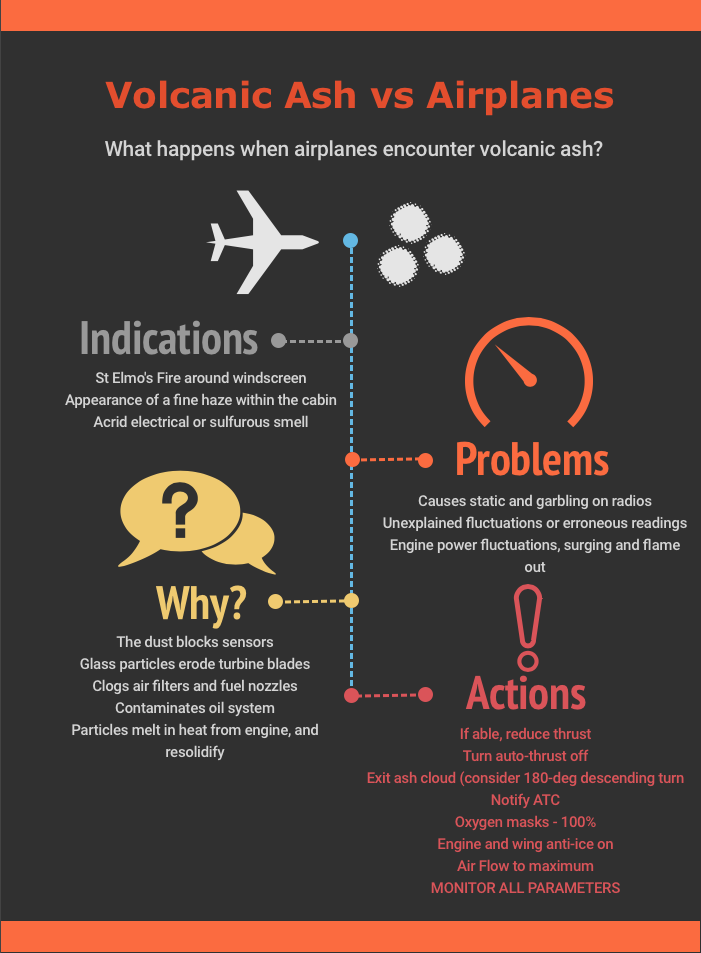 We have made you a handy infographic explaining what happens, and what you should do about it, but the general gist is:

Watch out for the signs that you might be entering an ash cloud – a strange colored cloud (in the vicinity of a known volcano), sulphuric or acrid smells in the cabin that can’t be blamed on the co-pilot, increased static charge around the flightdeck windows, garbled radio, or a picture of it on your sigmet chart (that you missed in the pre-flight briefing) are usually a good giveaway;

If you think you’ve flown into ash, get out fast. A 180 degree turn is usually best. Follow the actions or volcanic ash checklist for your aircraft type, and consider getting yourself on oxygen;

Look after your engines. Monitor your engine closely – you might see surging, stalling or high EGTs. If they are, reduce power and turn the auto throttle off. Do not try to climb out of it;

Watch your speed. If you’re getting erroneous speed indications, go back to basics using pitch and power until you can confirm your speed is safe;

Report it – Chances are if you’ve flown into it, so will another aircraft behind you, so make sure you put a radio call out to warn them, and to let ATC know why you just did a massive wheelie in the sky.

The Bigger Issue for Aviation

In 2010 the unpronouncable Eyjafjallajökull erupted and caused enormous disruption to air travel across Europe. The disruption lasted for over a week, and that was just one volcano!

A previously published report established that over one hundred airports in twenty-six different countries were affected by the eruptions of just forty-six volcanoes within a three period. Unfortunately for aviation, there are about 1500 active volcanoes in the world (not counting the ones that line the ocean floor.) 75% of these fire breathing mountains live in the Ring of Fire, in the Pacific, but there are some seriously cranky calderas on all continents bar Australia.

Which ones should we keep an eye on?

Volcano-watching organizations and aviation authorities have established a ranking system for volcanoes using an overall threat score, and a threat to aviation score which take into account 24 factors.

In the US, Kīlauea in Hawaii ranks numero uno worst with an overall threat score of 263, and an aviation threat score of 48. Mount St. Helens, Washington poses the greatest threat to aviation with a score of 59.

So what other resources are there to help avoid serious aviation disruptions from eruptions?

Unfortunately, volcanic eruptions can be a little hard to forecast, but generally how much they are rumbling, GPS data that monitors seismic activity, and historic eruption data are used to predict if and when they might pop.

Ash clouds are relatively hard to track as well – normally data is plugged into ash cloud modeling programs that consider the density and plume size, and the wind conditions for the day to model how it might disperse. Satellite sensing to detect radiation absorption levels, and thermal infrared wavelength levels also help, but there is no one sensor for observing everything.

Aviation authorities determine ash zones based on the concentration of ash. These are either a No Fly Zone, or an Enhanced Procedure Zone, and are based off tolerance levels agreed with aircraft and engine manufacturers. Generally enhanced procedures require training for the pilots (on identifying effects) and additional maintenance checks for the engines and aircraft.