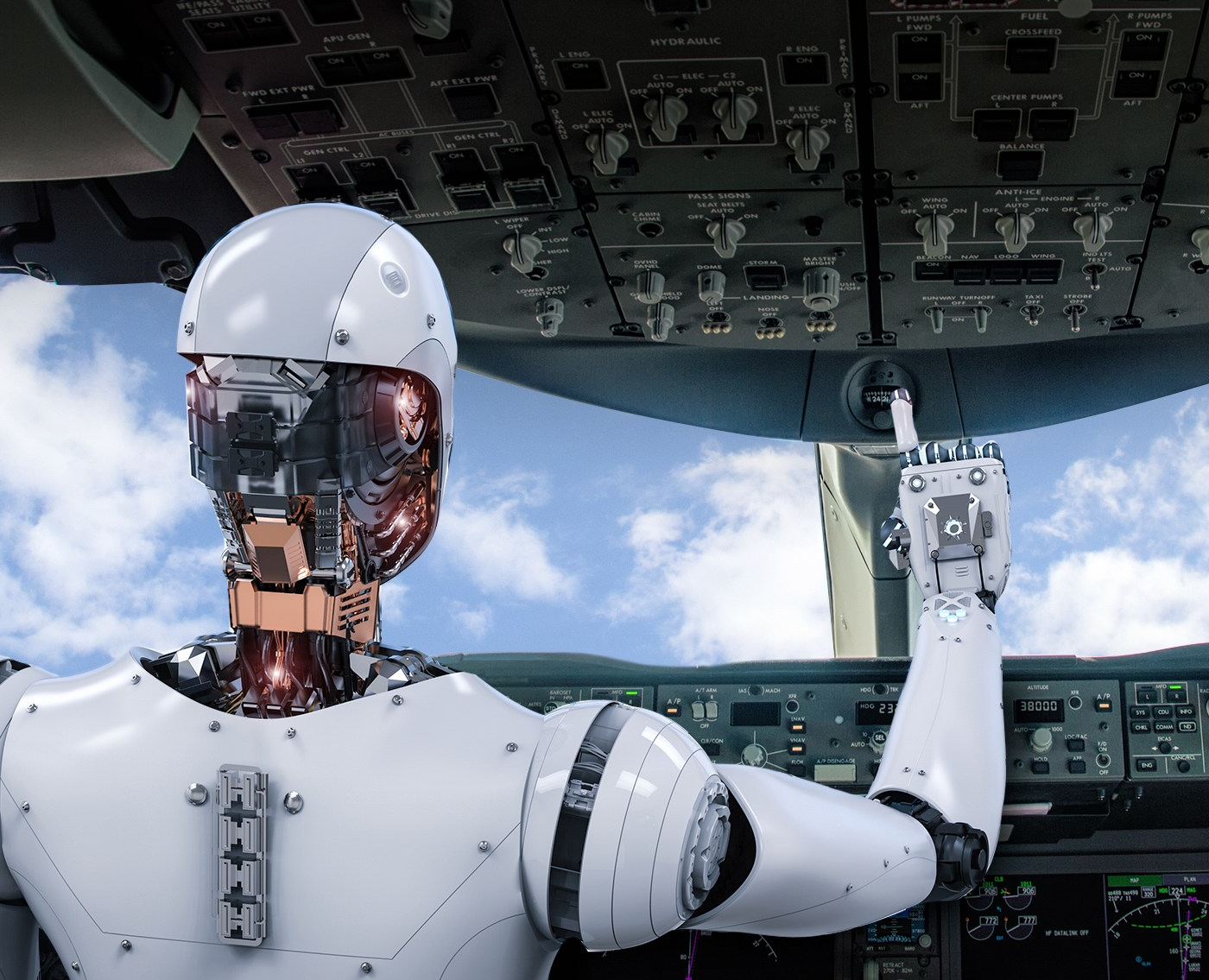 
Back in March 2020, Eurocontrol released something called ‘The FLY AI Report – Demystifying and Accelerating AI in Aviation/ATM’.

Now, the minute most aviation folk hear ‘Artificial Intelligence’ they generally start imagining either a Matrix type world ruled by super computers, or they are a pilot and get angry at the thought of the most ‘know-it-all’ co-pilot possible sat next to them.

But AI has actually been used in aviation for a while now, and its integration into the aviation operations environment might be rather disappointingly un sci-fi, but it is very NOT disappointingly impressive when you start to see the clever ways it is improving the safety and efficiency in our industry.

The First Law of Robotics

First, let’s establish what is actually meant by the term ‘AI’.

It is not so much Replicant as it is Roomba – ‘Artificial Intelligence’ is used to categorize systems that have the ability to independently gather information, assess it, and (here comes the AI bit) make a decision based on it.

So your Roomba with its camera sensors and ability to make the decision to turn around rather than smash into the wall in front of it means it is categorized as an AI. A basic AI, but still, an AI.

AI is categorized into 6 levels, starting with your Level 0 – Low Automation stuff which just supports a human operator by gathering info and analyzing it. Beef up its brain a little though, and it becomes a Level 1 – Decision Support which not only gathers and analyses, but can also select certain actions in relation to some basic tasks or functions. Like, don’t run into walls.

As the levels increase, so does the ability of the systems to analyse greater data inputs, and the independence of the system to “decide” and act without any human operator involvement at all. Highly complex system are even able to determine what might happen based on data patterns, and so pre-empt actions, making decisions based not on the direct data, but on forecasts and possible things that could happen. 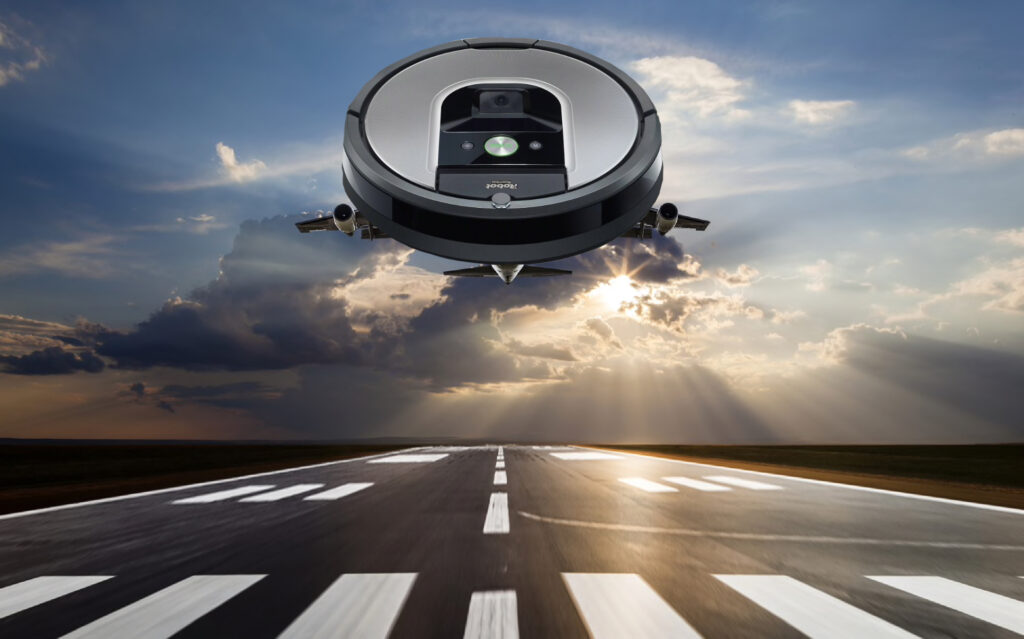 Flying Roombas could help clear up the atmosphere from pollutants

We aren’t talking vacuuming though, we are talking flying…

Actually, for all you pilots out there, we aren’t really talking flying. Not yet. Some airplane manufacturers are toying with automated takeoffs and that sort of thing, but no AI is currently capable of the level of autonomy which would enable it to totally replace Captain McFleshy. What we are talking is systems that support other areas of aviation operations in parallel to human operators – by providing data acquisition, analysis, action selection and implementation.

That all suddenly sounds quite boring, but the functions of AI in aviation are anything but. 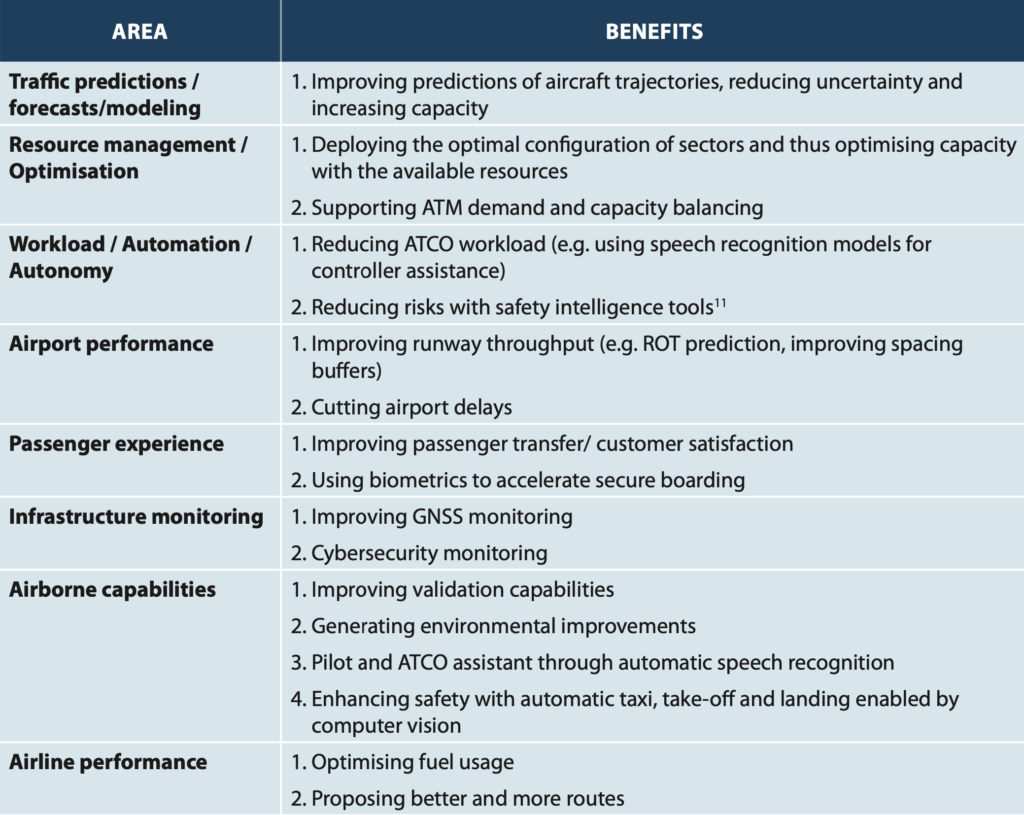 The cat-ai-logue of uses is impressive

Most of the AI currently implemented in aviation is the “detect and avoid” type – systems that focus on precision navigation, or image detection. Sort of giant Roombas for the aviation world. Here are just a few of the current technologies that might be helping your flight without you even knowing it.

Eurocontrol in Maastricht already use what they call a “learning machine” which can predict 4D trajectories – in other words aircraft position, altitude, speed and time. Being able to predict traffic flows means they can optimize the use of ATCOs and put the people brains where they are most needed.

The clever AI algorithms have a “what if?” function which lets them “tentatively probe” (Eurocontrol’s choice of phrase, not mine) the impact of certain airspace restrictions, or regulations, on traffic flow. It can monitor workload, spot probable bunching points, and also predict traffic one or two hours in advance to work out how the handover between different control sectors might affect the flow.

An AI system produced by Honeywell is being used to save airlines up to $200,000 per aircraft per year in fuel costs, and up to $40,000 per aircraft per year in maintenance costs. The system has data gathered from years and years of flight statistics, across a whole bunch of airlines, and it has swilled all this data about in its big brain and can now take specific flight plans and review where fuel has been wasted before.

The system can not only determine better routes, but can help make strategic decisions on things like flight path routings, the best direct path to landing to take, engine out taxi etc. While the pilot brain is thinking “If I turn an engine off now, will I have to use loadsa thrust on the other one to get it up that hill and around the corner? Maybe I should just keep ’em both running…” the AI brain is going “click, whirrr, yeah, turn the engine off now and you’re good!”

GNSS is great – it lets us operate the approach, landing, departure, ground stuff in low vis conditions. But there is a big issue with it –  propagation delay caused by the ionosphere. The current models for gathering data on this are pretty limited, but a new AI system can monitor and gather so much more data, and assess it so much more quickly because it has the ability to ‘learn’ – it is not just looking at data and spitting out figures. It is constantly updating its analysis.

Yep, there is an AI system that is used in conjunction with digital, remote, tower operations. It can speedily determine if the runway is clear, and calculate whether there is time for the next aircraft to land or not – it can do this a lot more efficiently than person eyeballs and brain, meaning airports can be a lot more efficient, and flight delays reduced, without reducing safety.

A system developed by Thales – PureFlyt – has the ability to draw on aircraft and outside world data like weather information. It works inside the FMS and can predict aircraft trajectory, and can offer optimized flight paths to decrease fuel consumption and improve passenger comfort, as well as maintaining safe separation from other aircraft.

AI technologies have simulated 2 billion test cases. So this system basically will have the brain of a Captain who has flown 100 million flight hours (and all the knowledge that would go with that experience).

What are the risks?

Well, automation and AI taking over and forcing humans into pots of jelly where they sap our energy seems unlikely. But there is the risk of oversight, or rather lack thereof. An AI, no matter how “intelligent”, is a system which people have programmed and inputted data into. Poor data in = poor data out.

So the quality and reliability of systems must always be closely monitored. And there’s a thin line between it supplementing operations versus it becoming the single system that people rely on and no longer control. The trick will lie in the training, and in how people interact with the systems – ensuring they understand them, and that strong contingency procedures remain in place.

AI offers new safety and security indicators that can support the early detection and predictions of new risks. It can improve performance by assisting people areas like data gathering and analysis where an AI brain is far quicker than the human brain. But the purpose is not to remove the human operator from the process, but to combine the best of computational methods and human intelligence to create a collaborative service provision.

The full FLY AI report from Eurocontrol is available here.