Fatigue and tiredness are big topics in aviation, and something we definitely need to have more conversations on. Particularly with some CEOs who are helping add the ‘ZZs’ into their airlines name…

But today we are focusing on just one thing: In-flight rest. Actually, we’re focusing on three things to do with in-flight resting. Basically, the what to do in flight when you find yourself in those “I’m tired, getting tired, think I might get tired, probably should have gone to bed earlier before my flight but now it’s too late” type situations.

You’re there, in the airplane and are tired, so what can you do about it?

It’s not too late.

Actually, it is too late to not get into that position. If we could zoom back in time and somehow sleep better then that would be great, but for obvious reasons (the lack of time machine) we can’t.

Additionally, complaining about being tired, moaning about how your airline pushes FTLs to the limit, preparing a ranting post for PPrune, or lecturing the other pilot (because they’re the tired one) on better sleep management are not going to help.

Why not? Because they aren’t going to change the fact that right then, sat in that flight deck, you’re tired and do still have to eventually land the damn thing.

But, good news, it isn’t totally too late to try and fix it. So, here are some things that might help, right then and there:

This isn’t a “treat your body as a temple” post.

If you’re looking for diet tips, exercise info or any of that, move on. That’s not what this post is about. It also isn’t a ‘Let’s learn about sleep science and Circadian Rhythms and Fatigue Risk Management’ post. If you want all that then you can read the ICAO thing on it here.

Right, let’s start with these.

These are the things all operators have to let you do if you fly over a certain length of time. If you have more than two crew onboard for a flight and one or two of them are referred to as ‘augmenting’ crew, then you can take some allocated rest.

How you take it depends on the strategies your operator publishes and also what works best for you.

Don’t be that captain that hogs the entire cruise for themselves. Not cool. The aim here is to split the rest fairly (doesn’t always mean evenly) between the crew. The focus is on making sure the operating crew are best rested because they’re the ones who are going to have to land the airplane. So most recommend they take the last rest period, and wake up about an hour or so before landing so they’re fresh and ready for it.

Now, to get these really right, you do need to plan it before you even get on the airplane because you’ll need to manage your sleep, think about those timezones and all that joyous stuff. We’ve posted some pretty generic ones for you.

If you are reading this for the first time and work for an airline or operator that uses different strategies and you like ‘em, then tell us about them! We won’t share your info, just the strategy details to help others.

‘How to do it’ – generic strategies

To be honest, these are all fairly common sense ‘how to sleep better 101’ facts so I’m going to stop there, and instead move onto the ‘my allocated rest didn’t work/ isn’t for hours/ I don’t get any and I’m really, really tired’ section.

My allocated rest didn’t work/isn’t for hours/I don’t get any and I’m really, really tired.

Now, I take controlled rest for granted and am particularly good at it, but I realise a lot of places don’t actually allow it? Or authorities haven’t approved it? This is frankly ridiculous. If you’re doing long flights at weird hours then you’re going to get tired because no brain can overcome the perfectly natural and necessary requirement to sleep.

Which is why controlled rest should be allowed and if it isn’t, get onto your operator and make them let you do it. I will add that it does need to be done properly though. There are some times when it isn’t appropriate.

There are also ways to do it.

First of all, don’t wait until your head is bouncing off the MCP from repeated micro naps. You want to start it when starting to feel snoozy. Having some caffeine before hand is also a good idea because this starts to kick in around the 30 minute mark which means when you wake up, you hopefully won’t feel even more dreadful.

Different operators have different rules and methods, but the ones I know are these:

Then get a pillow and blanket, slide your chair back, put your eye mask on, sleep…

Or just rest. Resting is also good. Maybe not as good as a full out snooze fest, but it will help. You should be woken up around the 45 minute mark, and take another 15 minutes to get back to fully alert.

Just to be clear, there are a few things the other pilot shouldn’t do:

The basics, in juicy Opsicle format 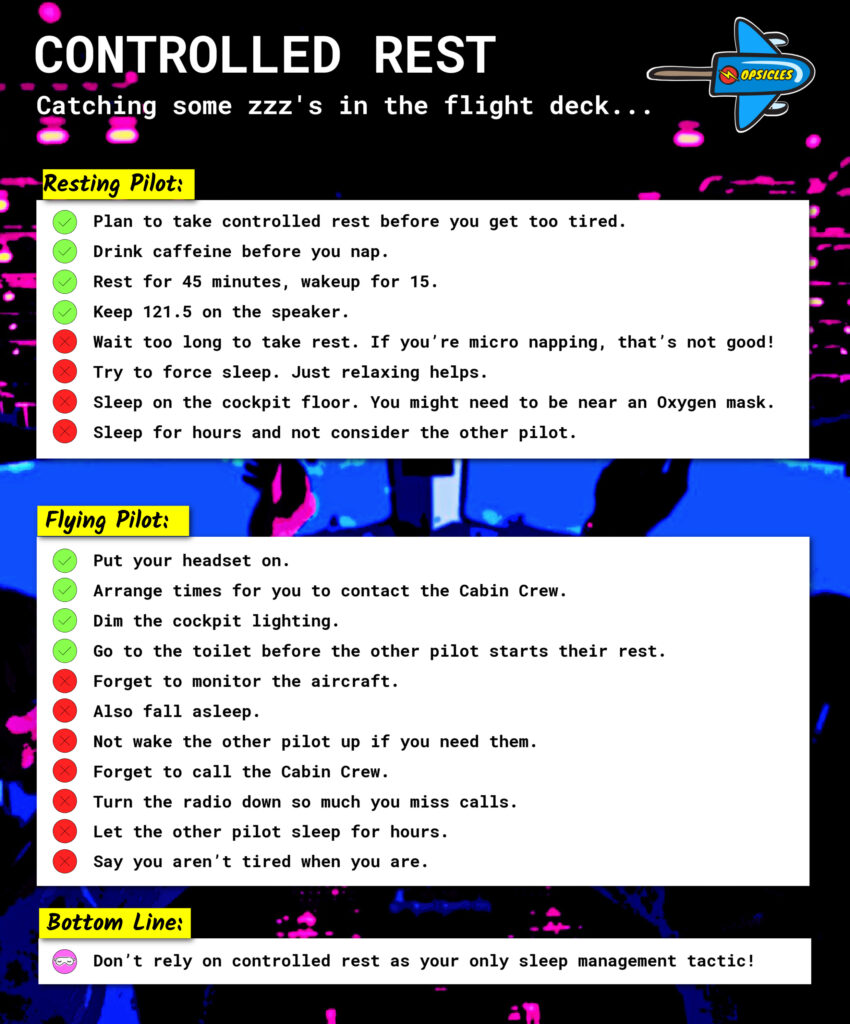 The other things you can do

You’re in flight, you can’t take allocated rest or controlled rest and you’re fast approaching exhausted. What other things can you do?

I mean, this feels like common sense again but here we go.

I want controlled rest and my operator says no.

They suck. To help convince them here are some more resources.