The Bermuda Triangle. A place of myths and legends. But how real is it, and what affect if any does it have on aircraft flying through it?

The Bermuda is a fairly loosely defined area out in the great Atlantic Ocean, generally mapped out with its three corners reaching Bermuda, Miami and the northwestern corner of Puerto Rico. It varies in size from around 500,000 sq. miles to 1,500,000 sq. miles depending on how its boundaries are drawn. 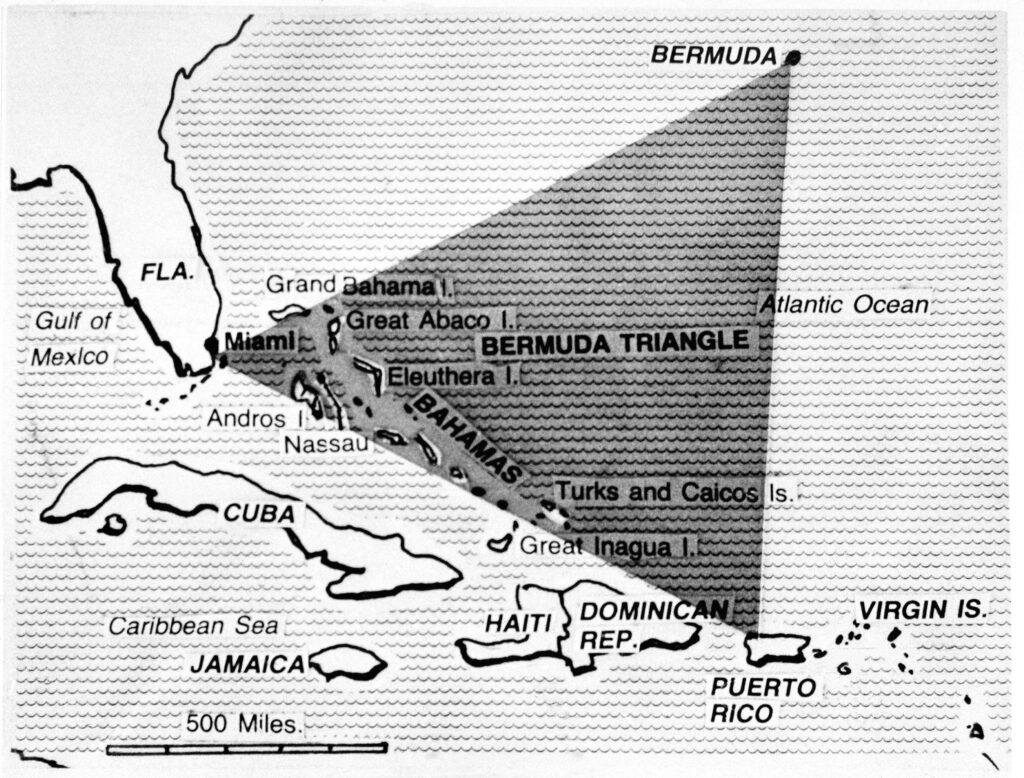 An oldish map of the Bermuda Triangle

Why do we talk about it in Aviation?

It has a reputation for disappearances – sinking ships and vanishing airplanes, dots on the radar that are gone in a blink, never to be seen again. Some say it is haunted, some say aliens use it as a human abduction point, others reckon it is home to an immense Kraken that swallows ships whole…

These might be tall tales, but in fact is has been the location of a higher-than-its-fair-share of naval and aviation disappearances, and random technical malfunctions too. Somewhere in the region of 50 ships and 20 airplanes since folk started paying attention.

In 2017, a Turkish Airlines A330-200 experienced a series of electrical and mechanical malfunctions while routing over the Triangle. Routing from Istanbul to Cuba, they ended up making a diversion to Washington Dulles. Flight 19 was a squadron of five Torpedo Bombers that disappeared in the area. And of course the famous Amelia Earhart’s final flight was rumored to have gone down in this general location.

It gained its name from an article written back in 1964, which started with an attention grabbing hook –

Read through the list of sea and air incidents and accidents and you will notice something – the vast majority of events happened last century. Aside from TK183 and a few light aircraft accidents, all the rest generally took place between the 1940s and 1970s.

The investigations into Flight 19 and Amelia Earhart’s disappearance both concluded that poor weather, a loss of situational awareness regarding their actual positions, and ultimately running out of fuel were most likely to blame.

Flight 19 was attributed to the Flight Leader mistaking the Bahamas for the Florida Keys, a broken compass and the fact that the advice for if you got lost in the area back then was to just “take up a heading of 270”. And the Turkish Airlines flight was a fairly uneventful malfunction and diversion.

The high numbers of events can also be put down to the high amount of traffic that routes through this region. It is a fairly major shipping route between the East Coast of the US and the Gulf of Mexico, and in more modern times it has become a fairly busy area for aircraft too. 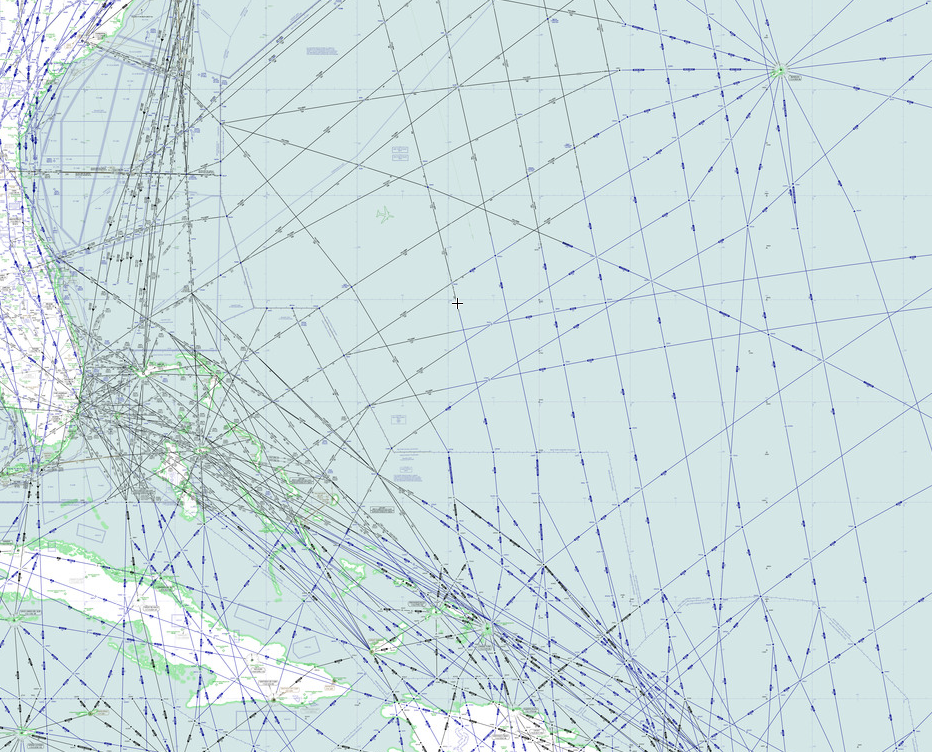 Airways and routes in the region

What is causing it all then?

Well, weather seems an obvious answer. It is a pretty popular area for hurricanes to aim towards. In fact, Bermuda (the island) sits in Hurricane alley – the more frequent path taken by Atlantic Hurricanes. So it is no surprise old airplanes and ships without the use of modern weather radar systems might fly into this region and be surprised by some really nasty ship-sinking / airplane-crashing storms.

Another explanation offered up by science is to do with magnetism. You all know this, but the Earth’s magnetic pole isn’t quite in the same spot as True North. Your compass points to magnetic north, but there are these things called Agonic Lines which line up magnetic and true north and along these your compass is Truly (pun intended) accurate. One such line runs from Lake Superior and down through the Gulf of Mexico.

Back in the days before GPS, when pioneering navigators relied on compasses and stars (which they couldn’t see because of all the bad weather), they would have potentially corrected for Magnetic to True. But correcting along an agonic line would actually have led them astray.

Then there is the depth of the trenches in this area of the ocean. Most of the sea floor is as far down as 19,000 feet, some areas over 27,500 feet. Which means when things do sink there, they are not easily found. So your sunken ship or ditched airplane is not likely to be found and the conspiracies about aliens and wormholes start to run rampant.

So, the lack of recent aviation events attributable to supernatural phenomena do suggest that it was probably due to more standard reasons that incidents were higher here than in others areas. Added to the fact it makes a good story, and we find we just have an area of bad weather, lots of traffic, and disappointingly unexciting reasons for accidents.

Are there any things modern aviators should look out for in the region?

Yes. Those hurricanes are worth keeping an eye on. The main Atlantic Hurricane season runs from June to the end of November. We wrote a bit about it here.

If you are flying to Bermuda itself then the fact it is a very remote island is also worth thinking about. TXKF/Wade International is your main airport, and some of the nearest alternates lie a good 650 miles away on the east coast of the US.

The surrounding airspace is also a threat. To the East you have the open Atlantic and all the procedures and challenges associated with that. To the West you have the East coast of the US, including the Florida Metroplex airspace, along with KMIA/Miami and KFLL/Fort Lauderdale – two of the busiest airports, in some of the busiest airspace of the USA. 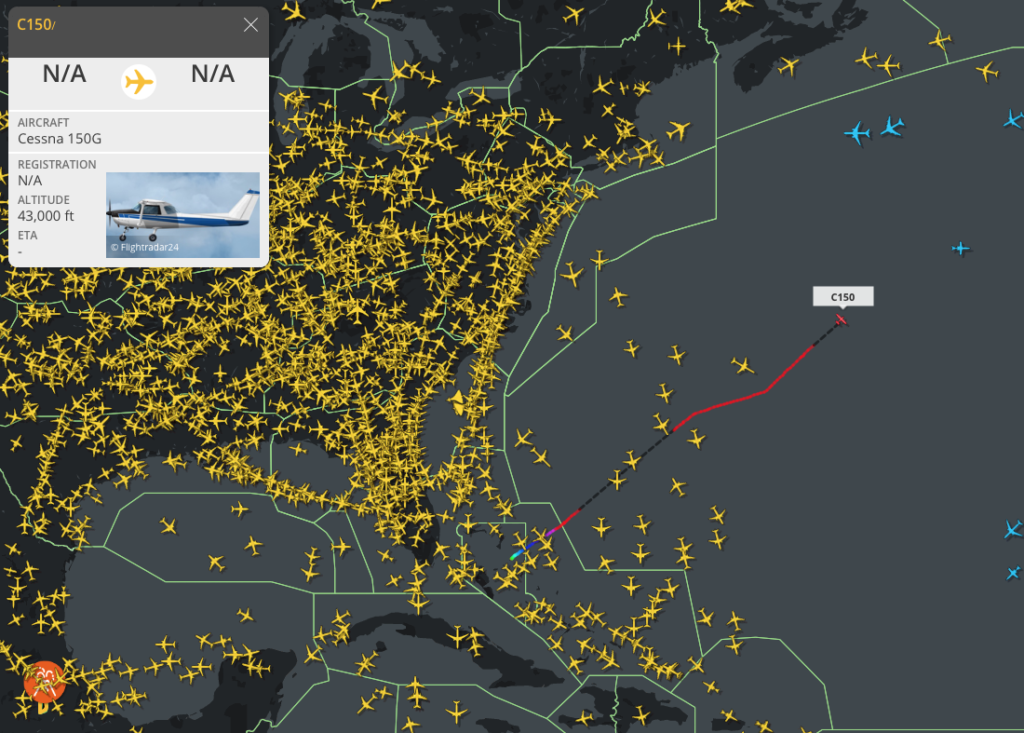 Nothing odd in the area… except maybe this?

Did you know there is a Bermuda Triangle in space?

Yep, astronauts have their own ‘Bermuda Triangle’ to contend with. It lies over the South Pacific, stretching between Chile and Zimbabwe, and is rather more real than its earthly counterpart.

This area of space is where the inner Van Allen radiation belt comes closest to the Earth. These rings of charged particles – loads of electrons in the outer ring and high-energy protons in the inner –  surround the planet, and are caused by the Earth’s magnetic field which protects us from this harmful radiation by trapping these particles in its magnetic grip.

Unfortunately, in this particular area, the Earth’s magnetic field is weakest, so all those particles are free to swoosh around more. They have also managed to get much closer to the Earth which means our satellites, space equipment and space travelers sometimes orbit through it.  This pretty much messes with electrical equipment, and people for that matter.

For the Hubble telescope, which passes through it about 10 times a day, it means a disruption in its workings for about 15% of each day. Satellites often experience temporary system failures when passing through during high flux days, and the astronauts onboard the ISS have to be shielded to prevent excess radiation. They often report seeing random white flashes, and having issues with communication equipment. 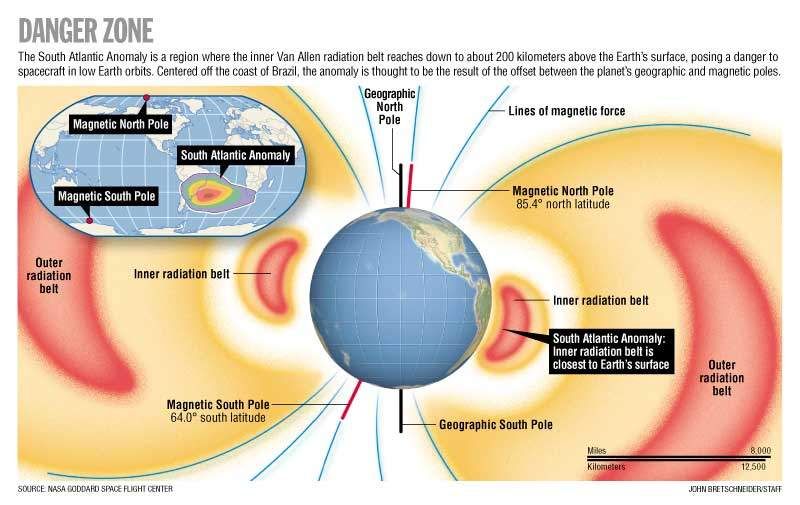 Most authorities and Scientific organizations agree, but if you fancy reading some more about it then these are some good places to head to: