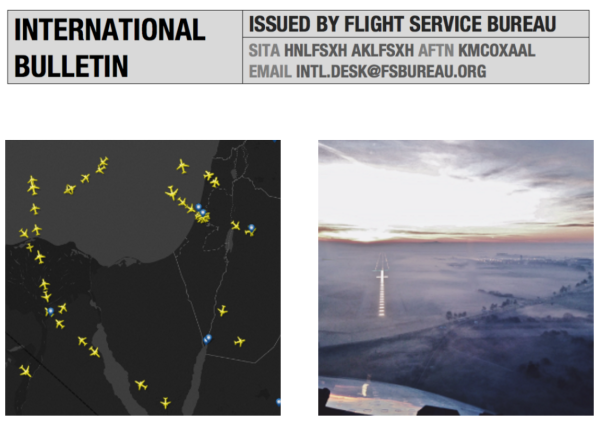 
02NOV2015 HECC/Cairo has requested that traffic through PASOS point on the boundary with LCCC/Nicosia FIR be rerouted, effectively closing airway UL550 and the Sinai peninsula. Shown on radar image above, most traffic is avoiding the area that an A321 crashed in on Saturday. No definite link is being made but Authorities and Operators are naturally cautious.

02NOV2015 Conditions perfect for fog across the UK and western Europe are causing widespread delays this morning. Unusually, almost all airports from EGCC/Manchester to EDDF/Frankfurt are affected by the same conditions, with many airports down to 100 metres vis. Most not accepting diversions. See below for further.

EXXX/Europe High delays in most Airports in a square containing EGCC/Manchester, EBBR/Brussels, EDDF/Frankfurt, and EDDH/Hamburg. Total of approx 120,000 slot delay minutes in Eurocontrol system. Other high delay airports include EHAM, EGLL, EGKK, EGSS. Check NOTAMs as most are not accepting diversions either. Fog forecast to be similar again overnight.

UUBC/Grabtsevo New Russian Airport now fully operational with 2200m runway (12/30) and able to accommodate international traffic up to A320/737 size.

UHSS/Yuzhno Sakhalinsk, a common Polar alternate, is closed due runway repairs 1200-2100Z until 01DEC and therefore not available as ALTN for Flight Planning.

NTTA/Tahiti will be without radar on 03NOV after 1800Z. As with all radar outages there is potential for delays and restrictions.

KSFO/San Francisco will close Taxiway Q and B on 07/08NOV to resolve a pavement issue. This will create a one-in-one-out restriction for aircraft taxiing to and from all gates west of Taxiway Q1. Specifically, this will affect United Airlines, SFOs largest customer, as a majority of its gates are west of Q1. Additionally, the proximity of the closure area to Taxiway B1 will render B1 unusable due to insufficient wing tip and jet blast clearance with the construction area. The loss of Taxiway B1 means that access to the end-around Taxiway Z will be unavailable.

HKXX/Kenya No longer possible to obtain a visa on arrival for passengers. Must now be arranged prior to arrival online at https://account.ecitizen.go.ke/register.

SOOO/Cayenne FIR, South Atlantic – Aircraft not FANS 1A equipped, east of 50W in the Cayenne FIR, can now expect a maximum level of FL310 westbound.

EXXX/Europe The European Business Aviation Association (EBAA) is providing a new tool to calculate Passenger Taxes payable in EU countries. The “PaxTax” tool calculates the total passenger tax for the flight, and breaks down the cost for both departure and arrival for the respective national taxing authorities.

VNxx/NEPAL Fuel supply update: China will supply fuel to Nepal for the first time ever, in response to a dire fuel shortage caused by disrupted supply lines with India. China will supply 1.3 million liters of gasoline, which will be transported to Kathmandu from the border via 100 tanker trucks. Please continue to check local NOTAMs for fuel availability.

DNxx/Nigeria FIR Widespread reports of a strike forcing the closure of Nigeria’s airspace have been deemed unreliable, per the Nigerian CAA. There is unrest and occasional industrial action, but no risk of airspace being closed.

Timezone Changes As DST ends in the Northern Hemisphere, series of clock changes completed on 01NOV as US ended Daylight Savings. Most of Europe completed theirs on 25OCT. Most northern countries are now on Standard Time.