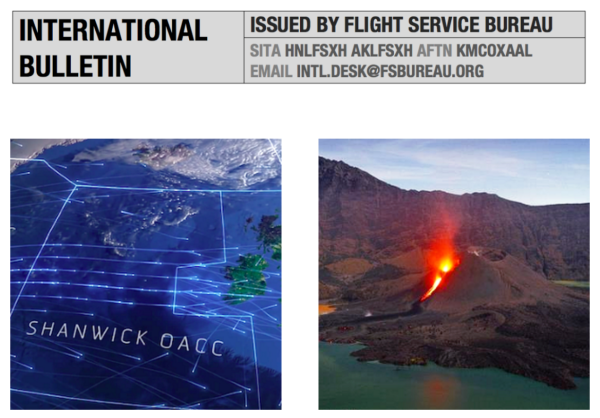 
North Atlantic OTS Changes this week 09NOV This Wednesday (12NOV) sees the implementation of the new NAT Track OTS, marking the first change to the lateral structure since the tracks were introduced in 1965. New requirements include RNP4, and 24 new Oceanic Entry Points come into effect. See below for further.

Indonesia Volcano Eruption 09NOV Operations into WADD/ Denpasar, Bali continue to be disrupted due to ongoing eruption of Mt. Rinjani on Lombok Island. Also affected are nearby WARB/Blimbingsari and WADL/Lombok.

EINN/Shannon FIR CPDLC service is withdrawn on the evening prior to implementation of the new NAT Track system, voice service only from 1715Z onwards on 11NOV.

LGGG/Athens FIR Strike of Greek Radio Operators (thereby including AFTN messaging, and AFIS) announced this morning for 12NOV. Overflights will not be affected. Full details here.

HESH/Sharm el-Sheikh remains open but subject to multiple advice notices from international Authorities. Many airlines have cancelled operations into the airport after increasing suspicions that a bomb was loaded here onto the A320 which crashed into the Sinai Desert.

HLLL/Tripoli FIR Libya has issued updated advice regarding airport availability – HLLQ, HLTQ and HLZW are only available for international arrivals, daylight hours only. PPR and Permit is required prior operations.

SCFZ/Antofagasta ACC, Chile. Crews on Airways UL780 and UL302 are requested to inform ATC of any speed changes greater than .02 Mach; if unable on VHF, use HF 10024. The procedure is to ensure separation between succeeding aircraft operating on CI speeds.

RPLL/Manila, Philippines APEC 2015 Summit being held 17-20NOV. Check restrictions, many commercial flights have been suspended during this period. Parking at a premium. Consider quieter alternates such as RPLC/Clark.

WADD/Denpasar, Indonesia Operations here continue to be disrupted due to ongoing eruption of Mt. Rinjani. Also affected are nearby WARB/Blimbingsari and WADL/Lombok. For updates monitor http://www.bom.gov.au/products/Volc_ash_recent.shtml

HECC/Cairo FIR, Egypt Point PASOS (LCCC FIR) is again available in both directions for flight planning. Please be aware flights departing OLBA via LCCC must file via VELOX-PASOS. Also see HECC NOTAM 1A277/15 and 1A278/15 for flight planning guidance.

Caribbean Tropical Weather Advisory Shower and thunderstorm activity is showing signs of organization in association with a low pressure system located just north of the Turks and Caicos and the southeastern Bahamas. A tropical depression or a tropical storm is likely to form on Monday while the low moves west-northwestward to northwestward near or over the central and northwestern Bahamas. For further details see National Hurricane Center

KLAX/Los Angeles Due to military operations of the coast of LAX there is a risk of arrival delays and reroutes during the overnight periods until Nov 12th.

MWCR/Grand Cayman may be forced to shorten the runway at Owen Roberts International Airport (MCWR/GCM). The runway, which was extended to accommodate long-haul flights, may have to be shortened in order to accommodate a 400 ft/124 m safety area. An extension of the runway cannot be further extended, and the airport authority is examining all options.

EGPF/Glasgow is closed overnight 22NOV-11DEC for runway and taxiway repairs.