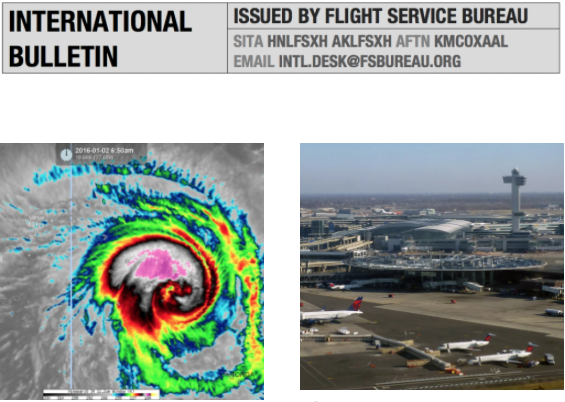 TSA Waiver program changes 04JAN The requirement for foreign operators to obtain a TSA Waiver for domestic flights within the US has been dropped, but only for aircraft under 45 tons. See new Notams FDC 5/6289, 5/5782, and 5/5806.

OAKB/Kabul. Afghanistan At approximately 1100 local time (0630 UTC) on 04JAN an explosion was reported near Hamid Karzai International Airport (OAKB/KBL). According to police sources, the blast occurred when a suicide bomber in a vehicle detonated explosives at a police checkpoint near the airport. With the exception of the assailant, the bombing did not result in injuries or fatalities, and there was no indication that airport operations were affected.

South Pacific / Tropical Storm Ula located approximately 230 nm south-southeast of Suva, Fiji. The current intensity is assessed at 85 knots based on Dvorak intensity estimates ranging from 77-102 knots. The system is expected to slow significantly under a weak steering influence, before shifting northwest as the ridge to the south begins to build.

UIBB/Bratsk A common Polar ETOPS alternate has issued a notice that non-scheduled aircraft must have prior permission due to fuel supply issues.

UIII/Irkutsk A common Polar ETOPS alternate. The main and only runway 12/30 is closed due to repair from 05JAN until 26JAN. Please see NOTAM A5600/15 for further details.

UUDD/Moscow Arrival of An-124 and B747 aircraft only by prior coordination with the Airport Company until March.

VHHK/Hong Kong International Airport opened a new $10 billion concourse this week. The Midfield Concourse’s 19 gates and 20 aircraft parking stands will allow the airport to handle an additional 10 million passengers per year and will serve approximately 20% of passenger flights once it begins operating at full capacity in March, Hong Kong International said. The five-story, 1.1 million-square-foot concourse sits between the airport’s two existing runways and connects to Terminal 1 via an automatic people mover.

NFFF/Nadi FIR Until Jan 21/2016. Operators of RNAV equipped aircraft intending to operate within the NADI FIR shall plan using random routes only if the aircraft are equipped with RNP10 or better and must have HF. Non-RNP aircraft will be permitted to operate but will be required to flight plan vis published fixes air routes. Please see NOTAM A1521/15.

HSSS/Khartoum, Sudan has no Jet A1 available for Ad-hoc operations between 27DEC and 05JAN. Carry return fuel or choose another tech stop.