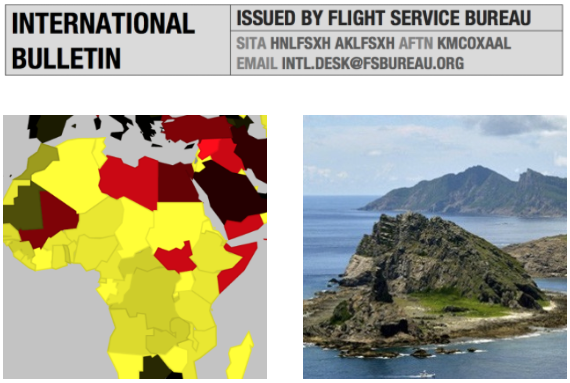 New China ADIZ – South China Sea 08JUN There have been several media reports this week that China is preparing to set up a new ADIZ in the South China Sea. Read the article.

KCLT/Charlotte New SIDS and STARS for aircraft arriving and departing to the Northeast have been added to CLT as of May 31. Also, construction of a new ATC tower has also broken ground, the new tower will be equipped with NextGen systems that include STARS (Standard Terminal Automation Replacement System), ADS-B (Automatic Dependant Surveillance – Broadcast) and AEFS (Advanced Electronic Flight Strip System.

CZZZ/Western Canada has been experiencing fuel shortages due to recent wildfires in the oil patch. Please check with local handlers for any fuel constraints.

KZZZ/USA Tropical Storm Colin has passed Florida, Georgia, South Carolina and North Carolina before moving out over the Atlantic.

LLZZ/Israel has signed an agreement with Eurocontrol and will allow the country and it’s users to benefit from the services that Eurocontrol provides. This is excellent news for filing out of LLBG and transiting to or over Europe as this will help streamline the process significantly and coordination will only have to be with Eurocontrol for any changes.

RCTP/Taipei has resumed operations on June 3 after operations were suspended due to flash flooding. The airport has also lost power numerous times due to the unstable power supply following days of severe flooding. While the power cuts rendered the terminal’s air conditioning system inoperable, the airport experienced only minor delays.

VNKT/Kathmandu has been experiencing problems with the VHF ATC equipment. Aircraft on approach and Area Control freqs may experience increased squelch and at times leaving ATC without comms.

HSZZ/Sudan has warned it will shoot down any aircraft that infiltrates it’s airspace that has not obtained the proper permission and/or following proper procedures. If you need to transit this airspace please make sure you have all the required documentation.

FHSH/St Helena has reportedly delayed the airport opening indefinitely, due to safety concerns – severe turbulence and windshear were commonplace during testing trials by a B737-800.

China Beijing – The Mainland Affairs Council (MAC), which supervises relations across the Taiwan Strait, on Friday issued a yellow travel alert for Beijing after the first H7N9 flu infection case for this year was confirmed in the Chinese capital.

Angola The World Health Organization (WHO) reported on 27 May 2016 that 301 people have died in Angola’s yellow fever outbreak, which began in December 2015. The number of suspected cases is now 2,536. The outbreak began in Luanda and has since spread to areas throughout the country, particularly along the coast and in the central regions, despite a large-scale vaccination program. Cases linked to the Angolan outbreak have also been reported in the Democratic Republic of Congo (DRC), Kenya and China.

Jamaica is now charging a $35 US departure tax for all air passengers.

Uzbekistan British FCO cautions when travelling with medicines; you can be detained on arrival if you’re in possession of certain medicines, including codeine; you should always carry a doctor’s prescription with you.

France – the Air France pilots’ union announced a work stoppage for 11-14 June, coinciding with the first week of the Euro 2016 soccer championship. The strike has been planned in protest over pay disputes, and the union has stated that it may observe further strikes. Further details are likely to emerge, as the situation is developing.

Yemen On 28MAY, approximately 20 gunmen stormed Aden International Airport (OYAA/ADE). A 90-minute gunfight followed the attack, during which one civilian was killed by a stray bullet. Authorities regained control of the situation and detained the gunmen’s suspected leader.

Nepal A nationwide general strike is planned on Thursday 09JUN2016 across the county. Protest can occur at short notice anywhere. Stay cautious and stay away from these areas.