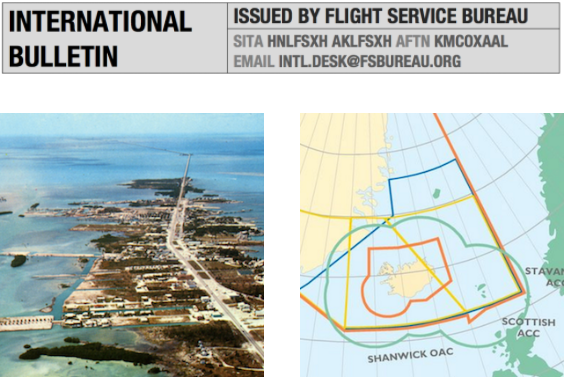 
New US CBP Airport 04MAY A new US Customs facility opened in KMTH/Marathon on 20APR, to facilitate increased traffic to Cuba. Read the article.

Iceland ATC Strike continues 04MAY Icelandic controllers are in a pay dispute with Isavia, leading to multiple strike actions at BIKF/Keflavik and BIRK/Reykjavik. Last week BIKF was closed overnight at short notice. Read the article.

EHAM/Amsterdam and other Dutch airports will observe a two minute silence on ATC frequencies today, 04MAY, from 1800-1803Z. ATC will arrange traffic flow so that no aircraft will land or taxi during this period, meaning likely delays, albeit for a short period.

SECU/Cuenca, Ecuador remains closed after an E190 slid off the main runway on 29APR, latest estimate is no reopening before 06MAY.

CZZZ/Canada Visa-exempt foreign nationals can enter and exit Canada by air without an Electronic Travel Authorization until 29SEP2016. After that date, these travelers will need to obtain online authorization to visit.

BIZZ/Iceland Multiple ATC Strike actions for BIRK and BIKF are ongoing, check NOTAMS and with handler for latest. Read article.

TFFR/Guadeloupe has ongoing main runway closures due to WIP, current shown are 04MAY 0200-1015Z, 17MAY 1000Z- 18MAY 1600Z. Only helicopters will be allowed to operate during these periods.

UIBB/Bratsk has a fuel shortage until 31MAY, non-scheduled movements are by PPR only.

NWWW/Tontouta has an ATC staff shortage and requires slots for arrival until 31MAY, Tel +687 352437. Work on 11/29 is also ongoing, check NOTAMS for any current outages, which will close the airport.

SVZZ/Venezuela changed timezones on 01MAY to UTC-4. In addition, all public offices, including public ministries, will only operate on Mondays and Tuesdays until further notice.

TTZP/Piarco FIR is trialing ADS-C and CPDLC with ident TTZP until 31MAY. Flights entering the FIR east of 57W should log on 15 minutes prior to the boundary with TTZP.

UHSS/Yuzhno has advised that B777 aircraft are limited to 310T during the summer period.

UIAA/Chita is only available as alternate for one specific airline (Aurora) between 0930-2100Z. Outside these times ops normal.

WSZZ/Singapore has introduced a fingerprint clearance system to verify the thumbprints of arriving and departing travelers ages six and above at select immigration checkpoints. The system will be progressively implemented starting at the manned immigration counters of sea and land checkpoints, followed by air checkpoints until full implementation is completed in the months ahead. Travelers should be prepared for slightly longer immigration clearance times at manned checkpoints, especially during the initial implementation stage of the project.

YZZZ/Australia Border Force employees have been banned from taking industrial action at airports for three months; the threat of ongoing strike action caused much concern for operations in March.

RJTT/Haneda the airport authority has changed the number of slots available for general aviation aircraft. Effective 25APR, slots for GA during the daytime (0600-2259 local) will be increased to 16 total for arrival and departure (from eight in the past). Note that there are no slots restrictions for night time operations (2300-0559 local).

CYVR/Vancouver will have one of its main runways 08R/26L closed nightly between the hours of 05-13Z 08MAY-02SEPT for construction. During the day (13-05Z) the runway will have the ILS on 08R/26L out of service, along with no approach lighting on runway 26L.

SLZZ/Bolivia Certain medications prescribed for personal use are treated as narcotics in Bolivia, with severe penalties for import or export without a valid prescription from a doctor; make sure you carry a letter from a doctor describing the medical condition and any prescribed drugs and that they are in their original containers and clearly labelled.

EBBR/Brussels has partially reopened the departure hall, which has remained closed since 22MAR. 110 Check-in counters will be open in the airport departure hall along with an additional 36 counters that are housed in temporary buildings. The EBBR airport authority expects this will bring the airport up to 80% of capacity.

EZZZ/Europe Bulgaria, Turkey and Romania will begin a project to interface their ATC systems so they can handle a significant build-up of airspace traffic in the Black Sea area. New routes are expected by mid 2016.

LEZZ/Spain The Spanish F1 Grand Prix is being held from 13MAY-15MAY and will bring heavier than normal traffic to LEBL/Barcelona and LEGE/Girona.

HEZZ/Egypt Individual travellers will in the future require a visa before entering Egypt. The exact date of the implementation of this rule is not yet determined. The visa must be applied for from the Egyptian embassy and the consulate generals before departure.

GVZZ/Cape Verde Aviation officials issued a statement announcing that national airports are open and operational. The statement was released following reports that flight operations had been suspended at the country’s airports.

ORZZ/Iraq Iran canceled all flights to Baghdad following a breach of the International Area by protesters on 30APR. The demonstrations have caused problems for pilgrimage flights to Baghdad, and those flights will operate instead to ORNI/Najaf.

VIDP/Delhi has opened a new ATC tower (which is the country’s tallest at 60 metres). VIDP will also be starting construction on a 4th runway this year and is expected to be completed by 2018 which will increase the airport arrival rate to 105 landings an hour, and will mitigate the common airborne holding.

View the full International Bulletin for 04MAY 2016