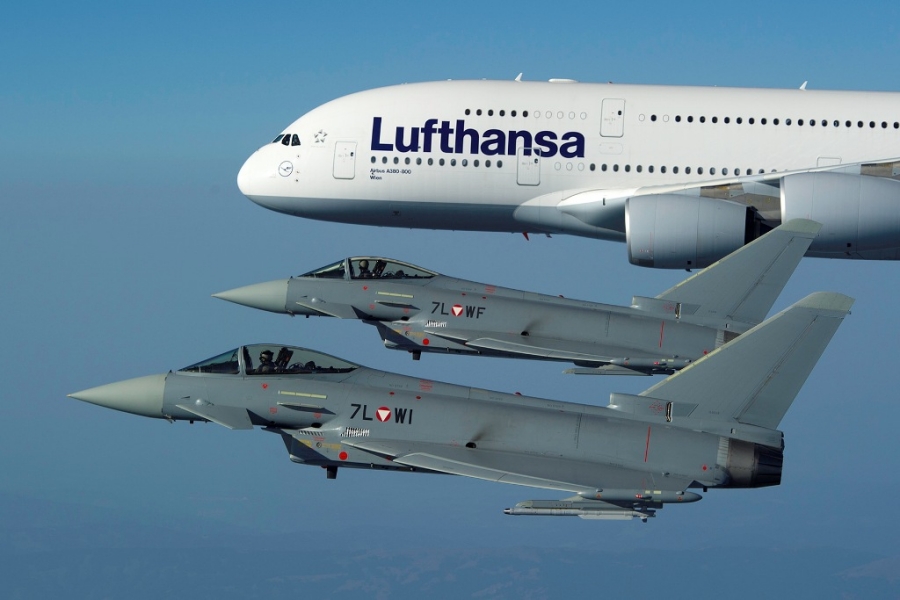 
One of our OPSGROUP members, James Albright, has kindly provided us with this informative piece on Intercept Avoidance and Missile Evasion. James will be familiar to many of you as the author of the amazing Code7700.com – an endless archive of useful information for the International Pilot. James has also published several books, which are available on Amazon.

MISSILE EVASION
It has been said that firing an AIM 9 Sidewinder missile at an airplane is the same thing as saying “I wish you were dead” because it was almost a certain kill. But nothing is 100% certain and if you find yourself with a missile headed your way, you do have a few options.

A fighter pilot friend of mine elaborates . . .

Interesting Q regarding a missile defense on a transport jet. To be blunt, there’s very little a pilot can do flying a limited maneuvering jet against a Mach 3+ missile that can make 22G+ turns. With that said, there are 2 schools of thought, try to out run/out maneuver or take the hit from a stable platform. First some academics . . .

Missiles from the surface or aerial adversary are generally one of two types, radar or optical guided. Optical can be of various sorts but most are tracking a heat source (engine exhaust if behind, skin friction if in front). Heat seeking missiles are typically smaller, accelerate faster and are harder to see. Radar guided missiles are typically larger leaving a larger smoke trail and many have booster section that jettisons just before a 2nd stage motor fires.

Time of Flight (TOF) for heat seeking missiles are usually shorter than radar guided. Unless a pilot can recognize the missile trajectory, booted phases, smoke trail, etc, it is common practice to be in idle to minimize heat signature (assume the missile is heat seeking). Otherwise, keep the power at max to minimize airspeed loss if maneuvering to avoid a stall.

Back to the 2 schools of thought, maneuvering can possibly generate an acceptable miss distance to reduce the missile’s selective probability of kill (Pk). Downsides are overspending or overstressing your aircraft (over-G). If the missile does impact causing damage, having excessive speeds or G-loading may exacerbate aircra damage from the missile. A slower and stable (wings level) platform would likely absorb the e ects of damage better from the missile impact. Ultimately, it comes down to the pilot’s assessment of the situation. Basically, if a missile is fired with a short TOF (<10 sec) and it appears out maneuvering is very unlikely, it would be best to stay stable, in idle power and ~5 degrees nose down.

Otherwise . . . A pilot attempting to out-maneuver a missile must respect the aircraft’s limits, mostly airspeed and G-loading (i.e. take it to the edge but not past). When an air-to-air missile is fired from a great distance, the easiest way to recognize it are contrails that appear to be arcing in the horizon. All missile shots at range typically loft and will make contrails. Surface-to-air missiles tend to be shot inside their max range to reduce TOF and detection. The first thought a crew member may have is “Holy cow, is this country launching a rocket into space?”

To me, the SA-2/SA-3 looked just like a Space Shuttle launch (seen both in person). The good news is there is time; their TOFs can range from 30-90 seconds. There are several types of guidance modes for radar missiles. Most common are command guided, proportional or semi-proportional and appear to track differently on your windscreen. To keep it simple, lets describe a trajectory like skeet or trap shooting. Most guided missiles will initially aim for where you are flying and “meet halfway.” In all cases, how a pilot maneuvers can greatly reduce the missile’s energy. 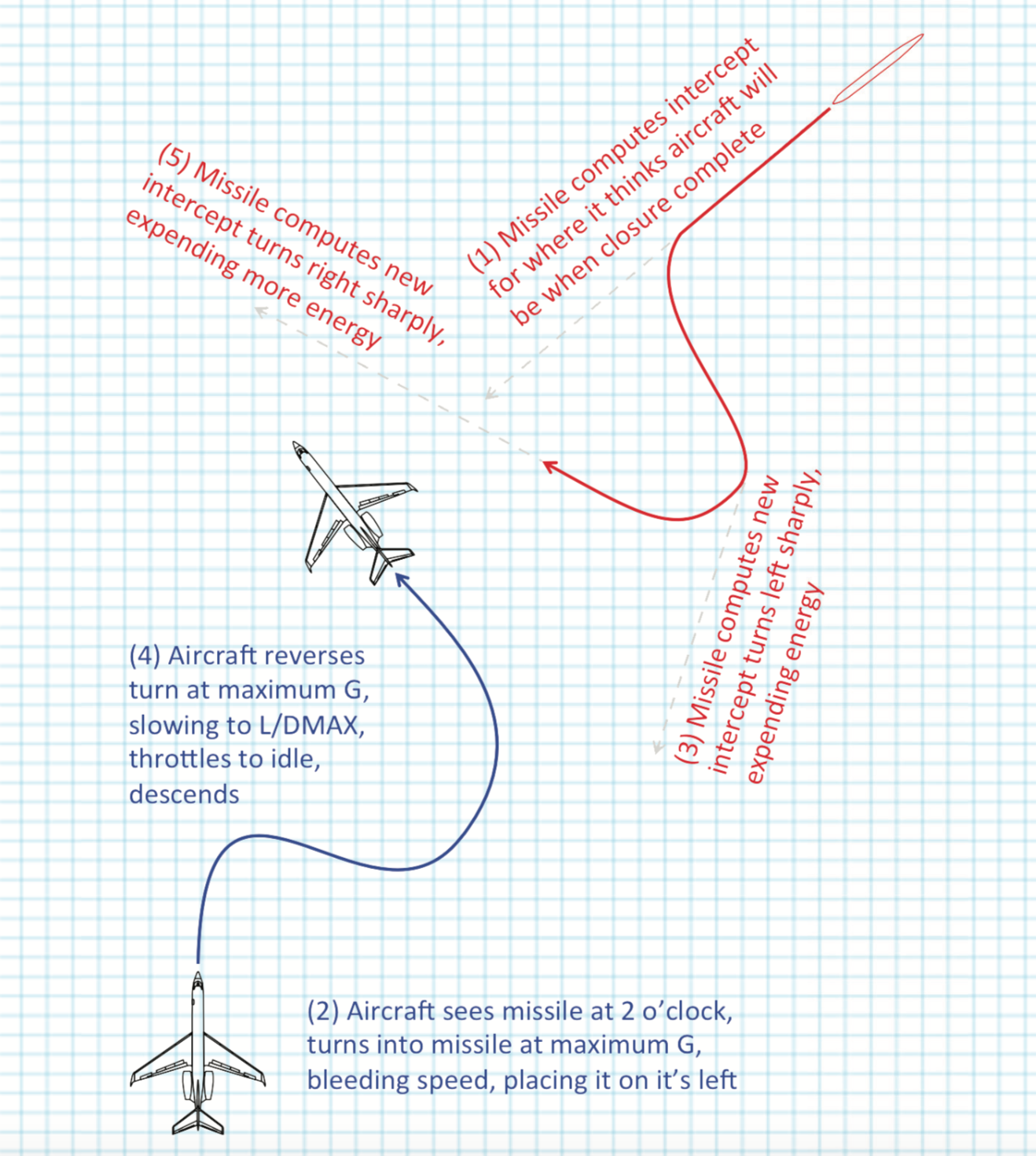 Lets describe a scenario. If you see a missile fired at you from RIGHT 2 o’clock, position, it will be aiming for an intercept ahead of you of your nose.

To deplete the missile’s energy, make a hard RIGHT turn past it and put it at your LEFT 9:00-10:00, roll out then descend ~15 deg with idle power. It will force the missile to turn harder (b/c it’s going so damn fast), correct it’s intercept point and deplete energy (watch out for your overspeed). After you see the missile correct it’s course, reverse hard LEFT turn to put the missile back at your RIGHT 2:00-3:00 position and roll out with full power and ~5-deg climb (watch out for over-G).

Again the missile must make a correction. These maneuvers can be accomplished at level flight but adding the 3rd dimension of alternating descent and climbs (at any +/- pitch) will add to the missile intercept problem.

Maneuvering properly and assuming a long missile TOF, you may see the missile stall before impact (best case) or the missile avoiding impact during its final turn correction (less than best case). Keep in mind, most missiles have proximity fusing. They are smart enough to detonate at the closest point of intercept if the missile determines impact is impossible. So if you feel impact (or near miss) is imminent, strive to return to wings level and ~5-deg nose low.

Turning into the missile will be a hard thing to do if you’ve never done this for a living (like Chris) and you are likely to be frozen with shock for a while. But you need to do it. Using the maximum G your airplane has available will do two things for you: it will force the missile to make the largest correction and it will bleed o your cruise speed. Once the missile is on your opposite side reverse the turn.

Because you will have lost some speed your turn radius will be tighter but the missile will be closer, so once again apply maximum G. For this turn, keep an eye on your angle of attack. Most aircraft will have a maximum lift-to-drag ratio at 0.30 angle of attack and this is a good number to shoot for. You can also look at airspeed (if you have a instantaneous VREF readout, use that) but keep in mind your stall speed goes up with G-force. Your objective is to end this maneuver as slow as the airplane can fly with adequate controllability. So if all this maneuvering failed to shake the missile, you will be in the best condition to survive a missile impact and/or detonation.
[Chris Didier, Lieutenant Colonel, USAF – Retired F-15E Instructor Pilot, interview 6 August 2016]