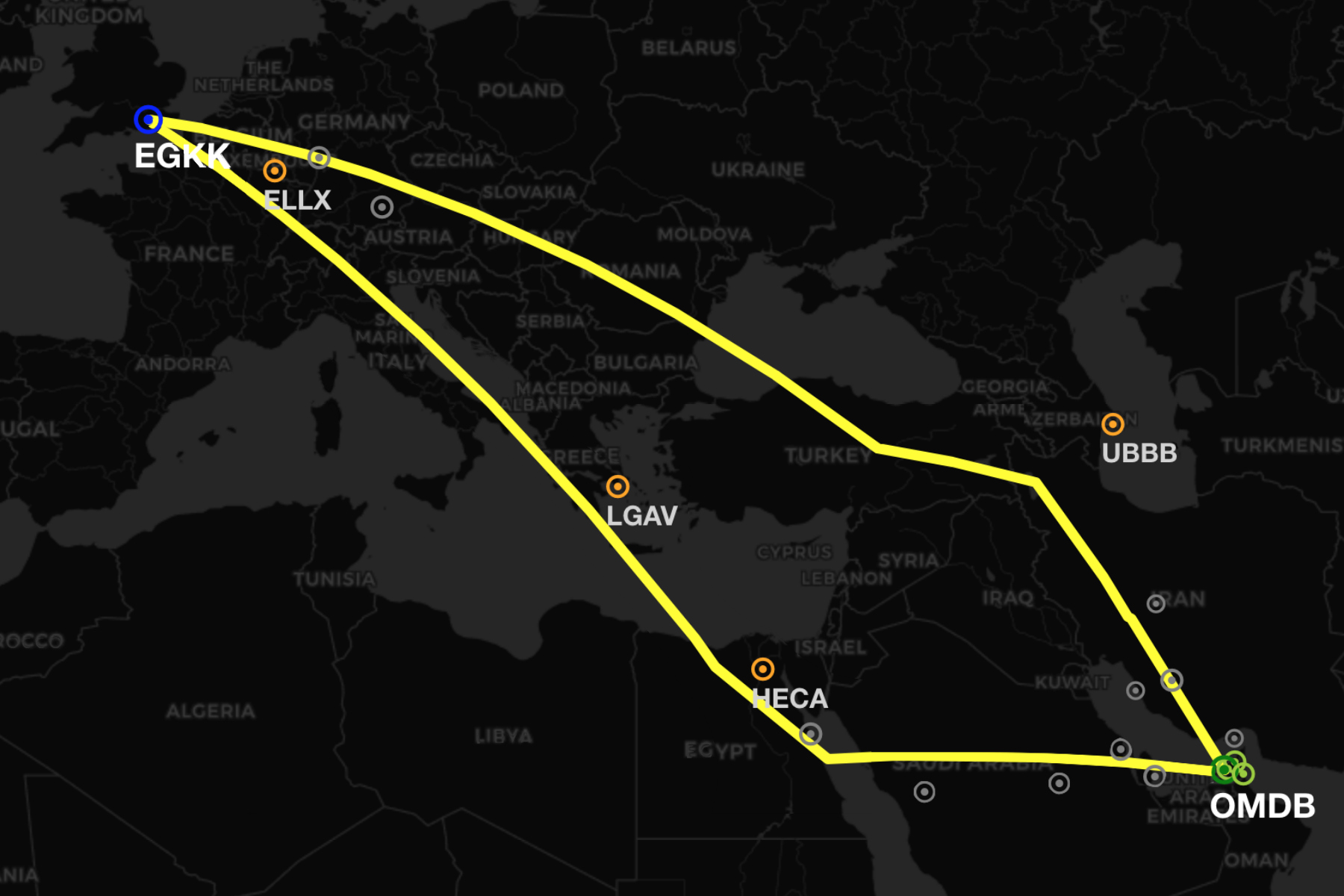 
In Short: Two main options, via Saudi and Egypt (safer, cheaper but longer) or via Iran and Turkey (shorter, busier and geo-politically more unstable). It’s a complicated planning climate at present. Review regularly based on latest risk factors. 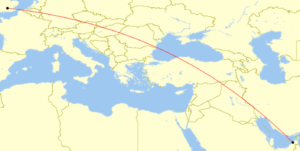 There are more business aviation operators flying between the Middle East and Europe than ever before. So we took the time to look over the route options between the two regions. For our example we will be using a flight from Dubai to London, but similar operational considerations are valid for the plethora of route combinations through this whole region. 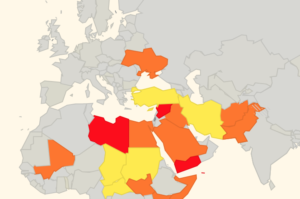 Firstly, we are sure you are a frequent visitor to our safe airspace website. Updated all the time with the latest notes and risk recommendations based on the latest intel. So, first things first, we want to avoid Syria, Libya and the Sinai Peninsula. As you can see however, this is a complicated geo-political region for flight planning. The direct great circle route would take us through Syria and would be around 3125nm. But that isn’t going to work. So, what else we got?

We will look at the two ways to head over the region. One is via Iran, Turkey and onwards to Europe. The other over Saudi Arabia and Egypt towards Europe. 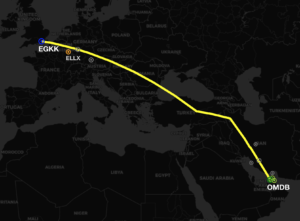 Safety: Both Iran and Turkey are FSB Risk Level: Three – Caution. Iran is involved in the ongoing conflict with Syria and several Russian missiles crossed the Tehran FIR and several busy international routes. There are also increased tensions between the USA and Iran at present – if you had to divert in an N-reg aircraft, Iran would not be the friendliest of places to do so. Turkey borders with Syria and we have received multiple reports of GPS interference in the area.

Ease and Cost: Iran has higher overflight costs and for US based operators a reminder of the sanctions for dealing directly with Iran, or agencies in Iran. You’ll want to use an approved agent if you’re from the US (i.e.–not an Iranian company). Iran doesn’t work on Fridays, so be aware there. Turkish overflight costs are reasonable and remember that Turkish authorities require the use of an agent to apply for permits.

Traffic: The biggest issue with this route is that everyone is using it! It’s congested with a lot of airline traffic. It’s a major corridor for Asia-Europe flights also. So, getting the levels you want, and off route deviations are more complicated. Things get busy, as you can see! 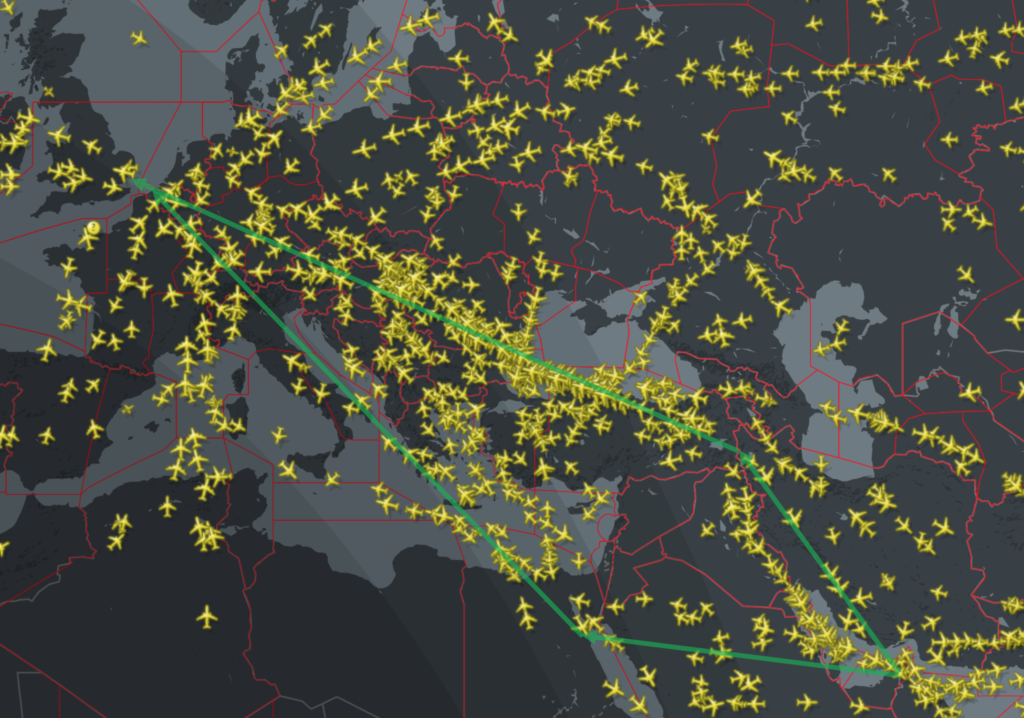 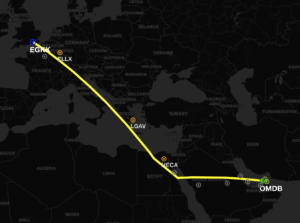 Safety: In terms of airspace warnings and risk, this route is slightly better. We have rated Saudi and Egypt airspace as FSB Risk Level: Two – Assessed Risk. Beyond the Sinai Peninsula and the Saudi/Yemen border, generally there is less of a chance of airspace security risks at present.

Distance: An extra 300nm from the great circle.

Ease and Cost: Saudi and Egyptian airspace are generally a cheaper option ($1,000USD+). In Egypt, by law you have to get your permit through an Egyptian agent, but it’s a straight forward process. In Saudi, again, using an agent is best; they normally have three-day lead time – so keep that in mind. Also remember that the CAA only work Sun-Wed during office hours.

Traffic: For most of the day, much less of a traffic bottle neck.

Of the two options, routing via Saudi/Egypt is cheaper, and safer (as long as you steer clear of Egypt’s Sinai Peninsular and Saudi’s border with Yemen), but it’s going to take slightly longer.

We don’t think it’s a good idea. There’s a lot of information out there saying certain airways are ok but only at higher levels. But if you needed to get down fast, or even make an unexpected landing, Iraq isn’t the place you would want to go at present. Treat with caution.

Which one is your favourite choice? Let us know!