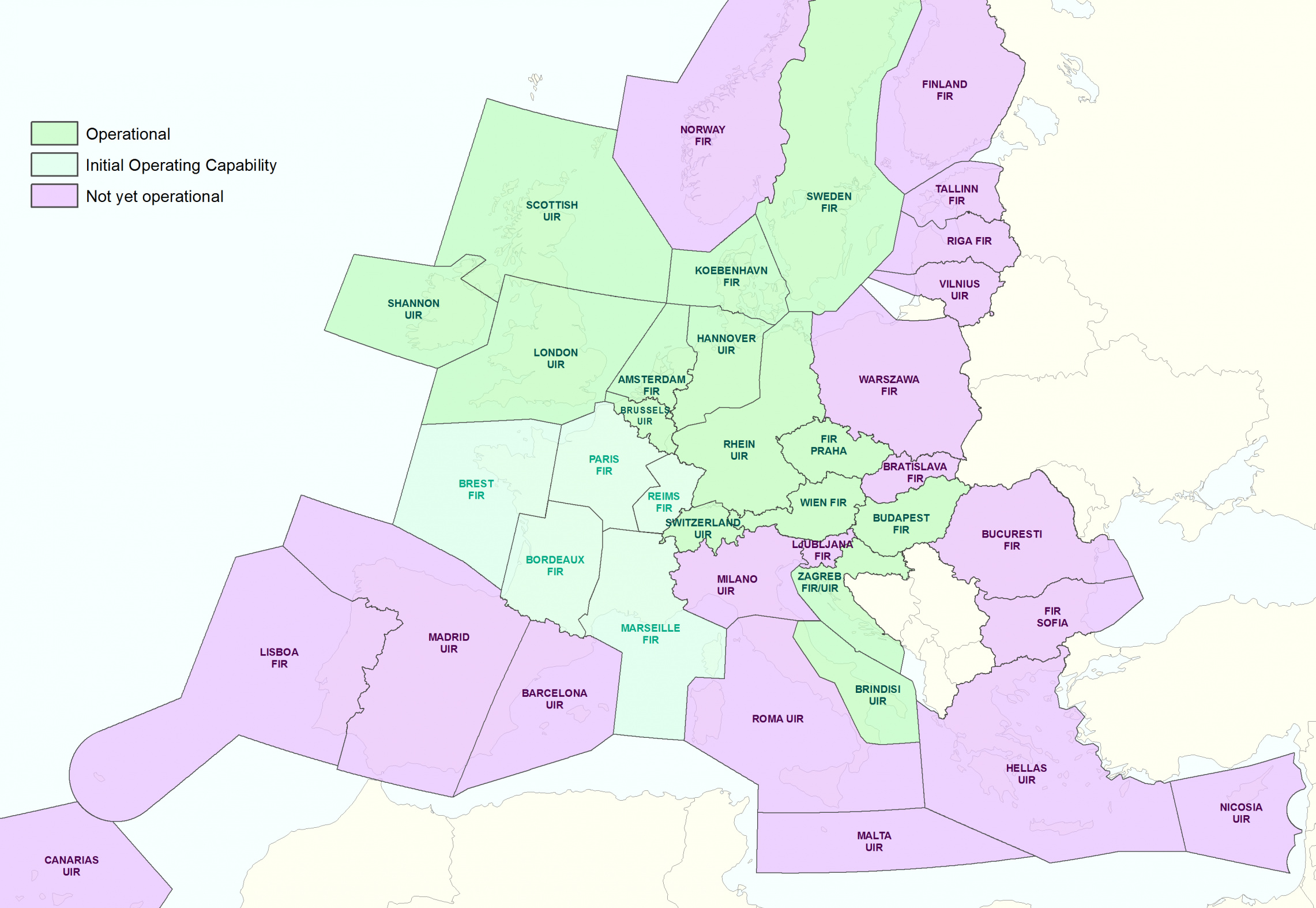 
Update 30 May 2022: ADS-C is now operational in Maastricht Upper Airspace (MUAC). So if you’re equipped with the right stuff (ATS B2: CPDLC v2 and ADS-C) and are registered on the EUROCONTROL Logon list for CPDLC and on the list for ADS-C usage in the MUAC area of responsibility then you’ll hopefully see some more efficient controlling of you. Some context: ADS-C in MUAC airspace has been available for some time already, but until now it’s only been certain controllers who were trained to provide it. From 30 May 2022, all controllers can do it. More info

Update 24 Aug 2021: Maastricht Upper Airspace no longer supports FANS 1/A. Dual stack aircraft must be reconfigured to logon via ATN, and aircraft with only FANS 1/A will continue to supported by conventional VHF. So now the only bits of airspace in Europe where you can still get CPDLC using FANS 1/A are: the London, Scottish and Shannon UIRs.

Update 28 Jan 2021: You now need to register your aircraft on the Logon List to get CPDLC in the EDUU/Rhein UIR – that’s the southern half of Germany above FL245, which is controlled by Karlsruhe UAC. The northern half of Germany above FL245 is the EDVV/Hannover UIR, which is controlled by MUAC, where the Logon List has been in operation since 2013. MUAC actually controls more than just the Hannover UIR – they manage the upper airspace above FL245 over Belgium, the Netherlands and Luxembourg too – one of Europe’s busiest and most complex airspace areas.

CPDLC in Europe can be bamboozling – multiple chunks of airspace, all in close proximity to each other, all with varying levels of operating capability when it comes to datalink. Plus there’s a “Logon List” to consider. And a Datalink Mandate. And different considerations depending on what kind of datalink you’ve got onboard…

All things considered, there are multiple reasons why embarking on a “Super Simple Guide to CPDLC in Europe” quickly becomes a daunting prospect, but with the help of Eurocontrol’s helpful online guidance and handy maps, we think we’ve got it sussed…

Ultimately, if you get your aircraft added to the Logon List, that means you’ll be able to use CPDLC in these areas and will probably get better directs and faster climbs. However, if your avionics are not eligible to be on the Logon List, ATC will NOT restrict you to the flight levels below FL285.

Before ATC in Europe had the Logon List, there were still many aircraft with avionics flying around contributing to major connectivity issues – also called “Provider Abort”.  This made the network unusable for properly equipped traffic, since messages got lost or timed out.

With the Logon List in place, ATC can improve the service quality for those who have the proper equipment and render CPDLC usable. The Logon List filters “bad” avionics which generate more than 150% of the average Provider Abort rate.

For more info, including details of how to get your aircraft registered on the Logon List, check Eurocontrol’s dedicated page here.

Important to note: the Logon List only applies to ATN aircraft – not FANS 1/A. So essentially, if your aircraft only has FANS 1/A, you don’t need to register – but you also won’t be able to get CPDLC across most of Europe (more on that below…)

Where can I get CPDLC in Europe?

Lots of places. Though not everywhere. The latest map that Eurocontrol published on this was back in April 2020, as per the below, which is kinda handy. But to see the actual latest info, check out their ‘Implementation Status Table’ here: https://ext.eurocontrol.int/WikiLink/index.php/Implementation_Status_Table 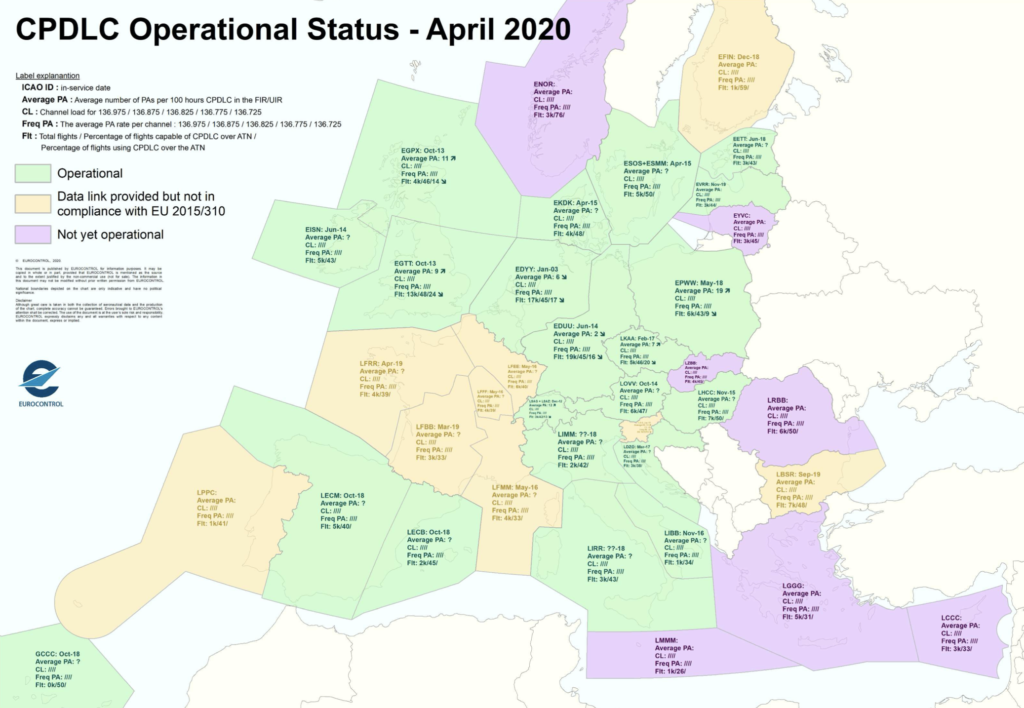 The only place where it’s mandatory to log on is in MUAC-controlled airspace (provided you’ve got ATN CPDLC, that is). This is to alleviate the controllers from having to ask every single plane to log on. So if you’re flying through MUAC airspace: log on to EDYY.

My plane only has FANS 1/A. Can I get CPDLC in Europe?

Only in the London, Scottish and Shannon UIRs. Everywhere else in Europe is only capable of working with ATN CPDLC.

No, not always. Some reasons why:

Updating your equipment with the latest software only solves parts of the known issues, so being compliant and having the latest tech does not mean you will always have a system that works 100% perfectly. But hey, don’t sweat it – Eurocontrol are looking into these issues, and working on fixes.

Is all this related to the EU Datalink Mandate?

Kind of. The EU datalink mandate is for ops above FL285 throughout Europe. The EU’s original plan was to require datalink for all aircraft operating above this flight level from 5 Feb 2020, but prior to this they issued a couple of Regulations which meant that most bizav aircraft are exempt – although some of these aircraft will only have until Feb 2022 to do the avionics retrofit (mainly Boeing, Airbus, and new aircraft built after Feb 2020). For more on that, read our article here.

Post a comment below, or send us an email at news@ops.group, and we’ll do our best to get it answered for you!