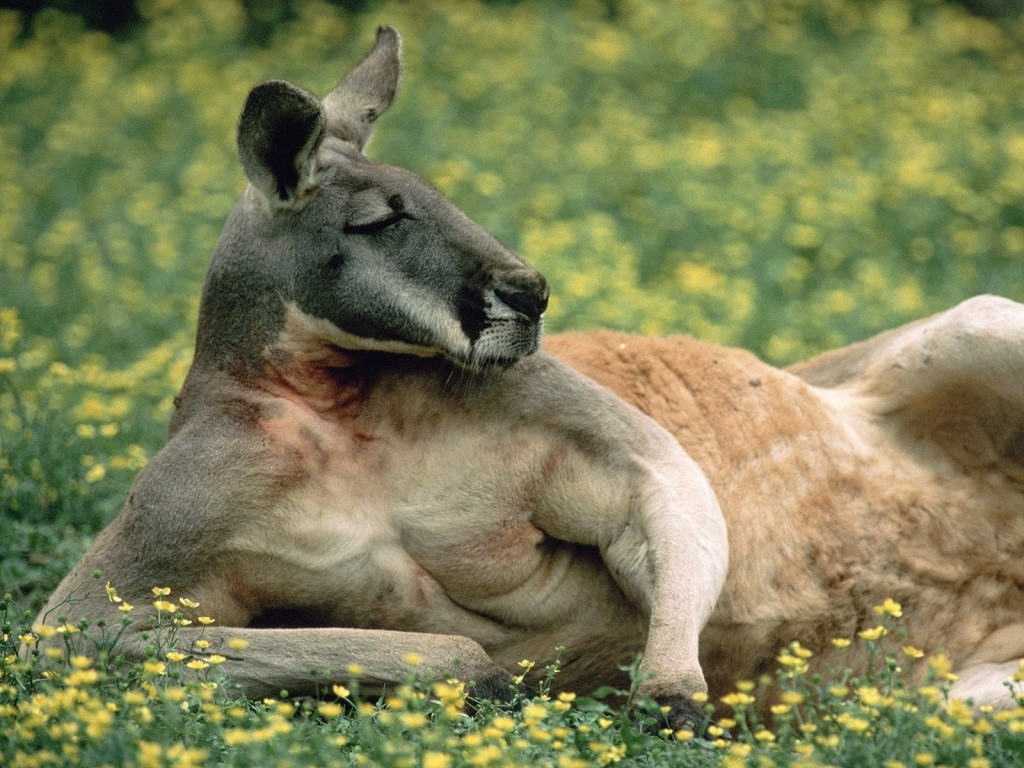 
If you haven’t heard of the AUSOTS then it means the Australian Organised Track Structure, and is basically a bunch of Flex Tracks that are produced on a daily basis, aimed at helping aircraft benefit from the best wind conditions.

The inventors define it as – “A non-fixed ATS route calculated on a daily basis to provide the most efficient operational flight conditions between specific city pairs”.

Sounds familiar? That’s because it is basically the NAT OTS but over a different bit of big, not-much-out-there, airspace on the other side of the world.

Opposite direction tracks are spaced by 50nm in Oceanic and 30nm in domestic, but with the introduction of ADS-B this is reducing. Again, probably all sounds quite familiar. 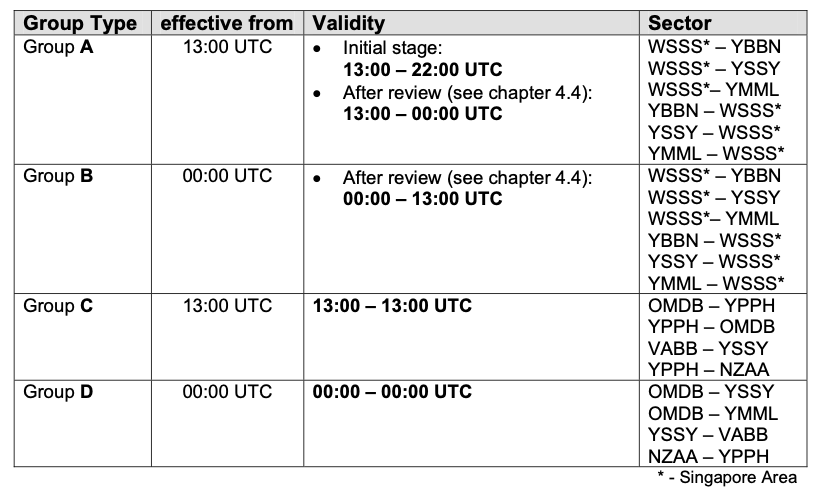 Your UPRs can be constructed between gates (entries and exits to FIRs), or by published waypoints (so long as time between them is not greater than 80mins), NAVAIDs or Lats/Longs (and you can use ones that are not whole degrees if you want).

You do need a reporting point on an FIR boundary (except for between AGGG-ANAU or YBBB-AGGG FIRs). 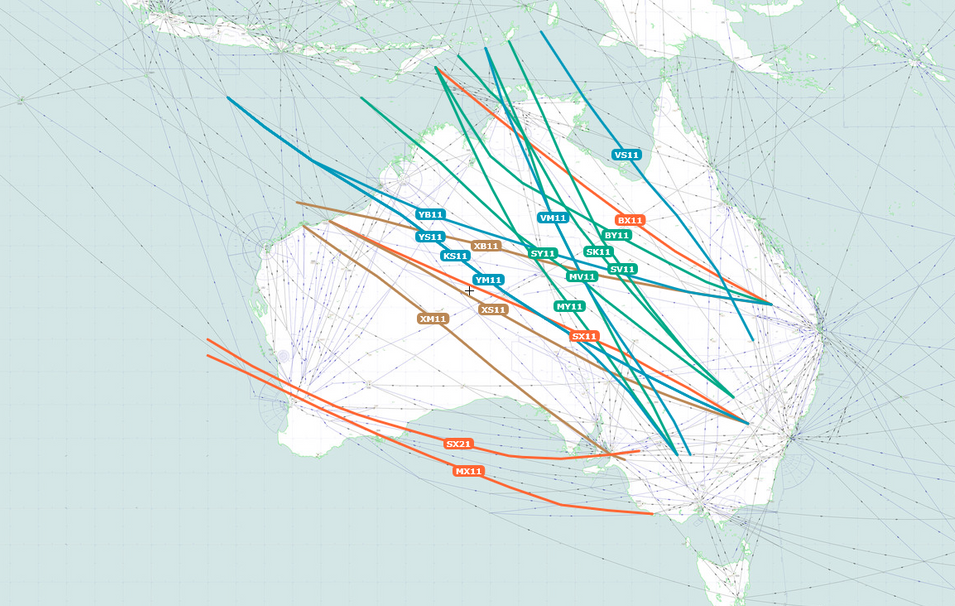 Overlay of some of the daily tracks in SkyVector

What do I need?

In terms of equipment, your usual stuff giving you RNP10/ RNP4 type capabilities, Datalink (CPDLC), a couple of LRNS and bits to help you navigate accurately – all that sort of thing.

You also need HF comms and ADS-B to fly on the UPRs. 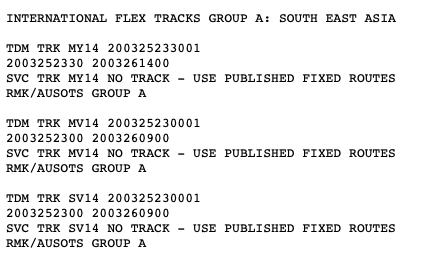 Last but not least, pick your track and file for it

What if something goes wrong?

If you are on a track and lose your RNP capability then as long as you can still navigate the track you can stay on it. If you can’t, you probably will want to let ATC know fairly quickish so they can put you onto a fixed track.

If you lose all your comms then it is simple as well –  try other methods, squawk 7600, do some broadcasting on 121.5 and 123.45, put your lights on, and maintain your last assigned speed and level for 60mins (following failure to report over compulsory point), then follow your flight plan. Once you leave Oceanic, follow the procedures of the state you’ve gone into.

Yep, they like it. Up to 2nm right of track is the way to go, and in 0.1nm increments if your airplane can do that. You don’t need a clearance for it, but remember you cannot use it in addition to offsets for wake, or weather avoidance.

Also allowed in this airspace, and given you are probably flying some mega miles through it, it might be a good idea. That way you can climb up when your weight will benefit, or avoid turbulence if there are reports of it without having to talk to ATC…

We did, but to be honest there is not a huge amount of it going on in this area. Most comms are taken care of through CPDLC. They like a position report sent via CPDLC when you get to the boundary of the FIR (all position reporting procedures are in accordance with ICAO Doc 7030).

The Australian controllers really know how to control. They are great at it. But they also have some pretty high standards which means if you make a mistake they are going to get grumpy and report/fine you. It might seem obvious, but if you’re off track for weather avoidance, once clear, don’t assume you can head direct to the next point – they want to see you regain your original track.

What will I find out there?

A whole lot of empty space and open sea.

The distance between Singapore and Brisbane is roughly 6,000km. The distance from Perth to Brisbane is over 3,500km. In between them? A lot of dry, dusty bush, and kangaroos. 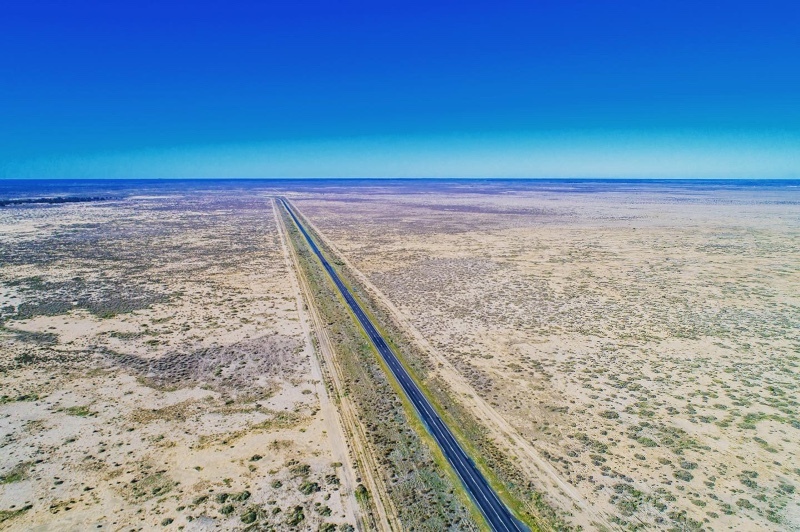 The middle of Australia is quite an empty place so if you’re looking for airports to use, we would recommend the ones around the edge of the country. YSSY/Sydney, YMEL/Melbourne, YBBN/Brisbane are the biggies on the eastern side and you’ll find nice long runways, decent approaches and good facilities at each of them. YPPH/Perth is the main south west one, while if you’re heading north-ish then YPDN/Darwin or YBCS/Cairns are probably your best bets.

You do have YBAS/Alice Springs in the middle if you really need it, and its a fairly decently equipped airport with a 7,999 ft/ 2438m runway and an ILS/RNAV approach.

Who can I ask for info on AUSOTS?

Should you need it, then you can email these folk with all your AUSOTS queries – uprs@airservicesaustralia.com

You can also try the Melbourne Center Operations Manager at Melbourne ACC on +61 3 9235 7420 or on AFTN: YMMMZRZS if you have specific questions about the published AUSOTS Flex Tracks.