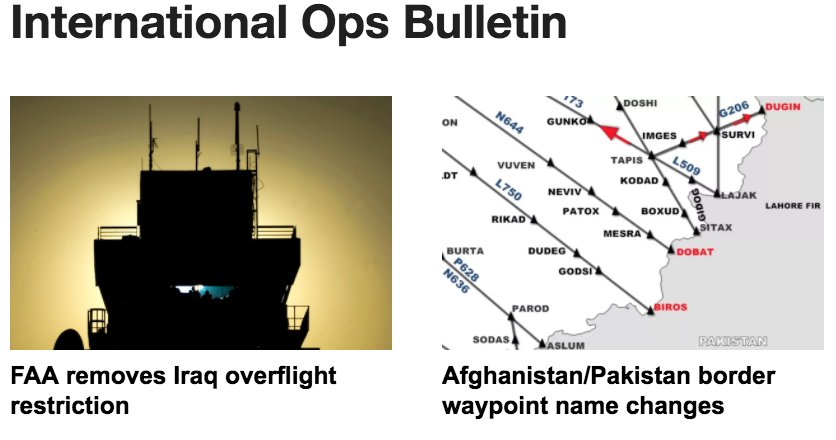 
Weekly International Ops Bulletin published by FSB for OPSGROUP covering critical changes to Airports, Airspace, ATC, Weather, Safety, Threats, Procedures, Visas. Subscribe to the short free version here, or join thousands of your Pilot/Dispatcher/ATC/CAA/Flight Ops colleagues in OPSGROUP for the full weekly bulletin, airspace warnings, Ops guides, tools, maps, group discussion, Ask-us-Anything, and a ton more! Curious? See what you get. Rated 5 stars by 125 reviews.
LSGG/Geneva Due to continued slot misuse, the airport have decided to reduce the period for PPR reservations from 21 days to 5 days. You can still view the available capacity up to 21 days in advance, but you can only apply within a period of 5 days before your flight. But watch out! In 2018 they’re going to start making operators file an FPL prior to applying for PPR! The PPR and FPL will then be matched and approved and any PPR that does not have a valid FPL will be cancelled.

LGAV/Athens Transport strikes on Dec 14 mean there will be no train service to the airport all day.

HEZZ/Egypt Russia and Egypt are expected to agree a new security agreement this week, which would mean flights between the two countries could resume as early as Feb 2018. Russia stopped all civilian flights to Egypt in Oct 2015 following a suspected terrorist attack on a Russian Metrojet flight leaving the tourist resort of Sharm el-Sheikh which killed all 224 people on board.

EBZZ/Belgium ATC at Eurocontrol’s Maastricht Upper Area Control Centre (MUAC) have started operating free route airspace over Belgium, north-west Germany, Luxembourg and the Netherlands above FL245. For now, it will only be available overnight between 22-04z, but they intend to make free route airspace available at all times by Spring 2020.

KZZZ/USA The FAA has issued a new safety warning about high-risk runway incursions and potential collisions. Read it here: https://www.faa.gov/other_visit/aviation_industry/airline_operators/airline_safety/safo/all_safos/media/2017/SAFO17012.pdf

LIZZ/Italy Travel disruption expected on Dec 15. ATC are planning a strike between 12-16z, although this should only affect the smaller airports. Overflying traffic should not be affected, and no big impact is expected for the major international airports – at worst just some flow rates imposed. Strikes also planned by some Ryanair and Vueling crew for few hours during the day, and by most Alitalia employees for the entire day.

RPZZ/Philippines Tropical Cyclone ‘Kai-Tak’ is forming off the east coast of the central Philippines. There are no international airports in the region. The storm is expected to weaken as it moves west-northwest toward Eastern Samar province over the next few days. It will then pass approximately 150nm to the south of RPLL/Manilla on Dec 18, by which time it should have died down to gusting winds of around 35kts.

OMZZ/UAE Potential for delays at airports across the country from Dec 15-18 as strong winds, dust clouds, and heavy rainfall are expected.

FEZZ/Central African Republic The security situation in the country is worsening. Widespread violence as armed groups are fighting across 80% of the country, and the UN now says almost half the population is dependent on aid. FEFF/Bangui Airport now has a curfew in place: no ops between 22-05z until Mar 14.

LLBG/Tel Aviv The national labor union are planning to stage a 4hr strike on Dec 17 from 06-10z If the strike goes ahead, this would effectively completely shut down the airport to all traffic between these hours.

LEBL/Barcelona Strike planned for Dec 21-24 by around 2000 ground staff, check-in and cabin crew for the IAG group, which includes Vueling, Iberia and British Airways. There will be limited service during three periods on each of the four days.

RPZZ/Philippines Martial law will remain in place over the island of Mindanao until the end of 2018. Expect checkpoints, vehicle searches, short-notice curfews and restrictions on movement, particularly in urban areas. Flight operations to airports in the region remain normal, with no restrictions imposed on air travel by the authorities.

ZZZZ/Worldwide Rockwell Collins has fixed the software problem which led to more than 10,000 instrument approaches being removed the database last month. They expect to release the updated database to subscribers on Dec 14. However, they are warning operators not to use the software for temperature compensation for low temperature approaches – this must be done manually.

VICG/Chandigarh Airport will be completely closed from Feb 12-26, to allow for work to be completed extending the runway from 9000ft to 10200ft.

MHZZ/Honduras Spontaneous demonstrations and roadblocks are likely to continue in the coming days, following the recent disputed presidential election. The last remaining curfews across the country ended on Dec 10. Operations at international airports have returned to normal.

OPZZ/Pakistan Reports of critically low jet fuel supplies at all airports in Pakistan, as several refineries have stopped producing, due to a recent government directive. There’s now no fuel available for ad-hoc flights at OPLA/Lahore and OPRN/Islamabad unti further notice. There are currently no such restrictions at OPKC/Karachi, though that may change.

ORZZ/Iraq As expected, the FAA have now issued Notam KICZ A0025/17 which lifts the full ban on the Baghdad FIR and allows U.S. operators to overfly the country at or above FL260.

KLAX/Los Angeles Dry conditions and Santa Ana winds have caused multiple fires in the Los Angeles area. A state of emergency has been declared for Los Angeles, Ventura, Santa Paula, San Bernardino, and surrounding cities. However, most airlines have reported that they do not expect the fires will affect flights in and out of Los Angeles International Airport. KLAX/Los Angeles International, KBUR/Burbank and KLGB/Long Beach are all still open and operating as normal, although travel times to and from the airport are longer than usual due to road closures.

EHAM/Amsterdam The transport ministry are considering forcing all airlines with flights to “leisure destinations” to move those flights to EHLE/Lelystad when it opens to charter flights in two years time. The Schiphol ban would apply to destinations which are not capital cities and which lie between 700 and 4,000 kilometres from Amsterdam – that would include all Greek, Portuguese and Croatian destinations apart from Athens, Lisbon and Zagreb as well as many cities in Turkey, Spain and Morocco.