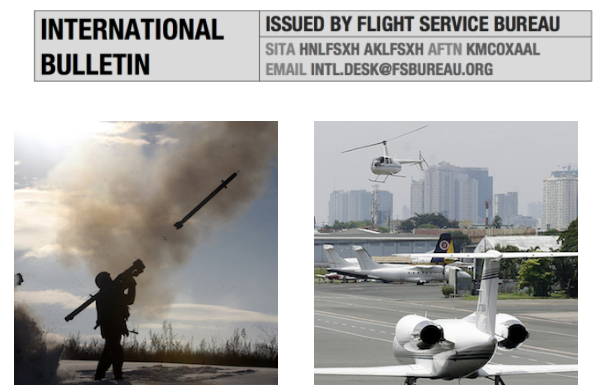 Germany issue new warnings, Manila may not ban GA after all

Germany issue new warnings, Manila may not ban GA after all


Germany issues new warnings 25JAN Germany has issued fresh warnings on the airspace of Egypt, South Sudan, and North Korea, in three separate Notams issued in the last week. We have updated the SafeAirspace.net country information pages with the specifics. Read the article

Manila may not ban GA after all 25JAN RPLL/Manila is not moving as quickly towards a complete ban of non-scheduled and General Aviation traffic as feared. This is good news for International Operators. Read the article.

HEZZ/Egypt, HSZZ/South Sudan, ZKZZ/North Korea Germany has issued fresh warnings on the airspace of Egypt, South Sudan, and North Korea, in three separate Notams issued in the last week. We have updated the SafeAirspace.net country information pages with the specifics.

RPLL/Manila is not moving as quickly towards a complete ban of non-scheduled and General Aviation traffic as feared. This is good news for International Operators. Read the article.

NTAA/Tahiti The airport is open again as of Monday morning local time, after closing due to flooding after torrential rains, but many taxiways remain flooded. Expect delays in handling and tech stops.

KZZZ/USA Announced yesterday and expected to come into force this week, is an immediate ban on US visas (and therefore US travel) for citizens from 7 countries: Iraq, Iran, Syria, Yemen, Sudan, Somalia and Libya. This is distinct from the Visa Waiver Program ban in effect since January 2016.

SBZZ/Brazil In the last bulletin we had a headline about a Boeing 767 shot on approach in Brazil. A bullet was found lodged in the wing. Some updates to that story are here, and safeairspace.net’s Brazilpage is updated.

VZZZ/Southeast Asia Don’t forget it’s New Year in Asia this weekend. Travel-related delays and government office and business interruptions will peak 27 Jan to 01 Feb, and could last longer in Taiwan, Vietnam and China, where the holiday will be celebrated through 02 Feb.

EDDB/Berlin Brandenburg will now not open until 2018, as they found more problems with the fire system this week. This is a recurring story, which dates back to 2012. So, for the foreseeable, you’re stuck with Tegel and Schoenefeld.

LTFJ/Sabiha Gökçen (Istanbul) Due to insufficient capacity at LTFJ, applications for individual non-scheduled flights will be refused, and private/charter flights can only be operated at “non-busy hours”.

KBPI/Palm Beach is going to see some new TFR restrictions due to the proximity of Donald Trumps Mar-a-Lago estate. If operating when he’s down here, you’ll have to depart from a gateway airport to PBI – those are TEB, HPN, IAD, MCO and FLL. NBAA has the details.

LSGG/Geneva EBACE is on from Monday, 22 May through Wednesday, 24 May 2017. Now would be a good time to get those slots booked if you’re planning to head over.

LFMN/Nice has a new procedure where ATC will alert crews to windshear.

VGHS/Dhaka The UK Department for Transport (DfT) announced today that it recently carried out assessments of security at Dhaka International Airport. Following this, the DfT has assessed that security at Dhaka airport does not meet some international security requirements (they haven’t said which).

OMAD/Abu Dhabi (Al Bateen) is hosting the International Defence Exhibition in February, so will not be available to IFR traffic daily between 0600-0800Z until Feb 23rd. There are also restrictions on using it as an alternate.

DNAA/Abuja The latest on the Abuja closure is that it will be completely closed to all traffic from March 8th – April 19th.

NVZZ/Vanuatu Health authorities have declared a dengue outbreak following a large increase in suspected cases in December 2016 and January 2017. Protect yourself against mosquito bites

LIRF/Rome Fiumicino is working on 16R until March, so 25 will be used for deps and 16L for arrivals. This means delays, especially if you want 16L/34R for departure – they say up to a 60 minute taxi time.