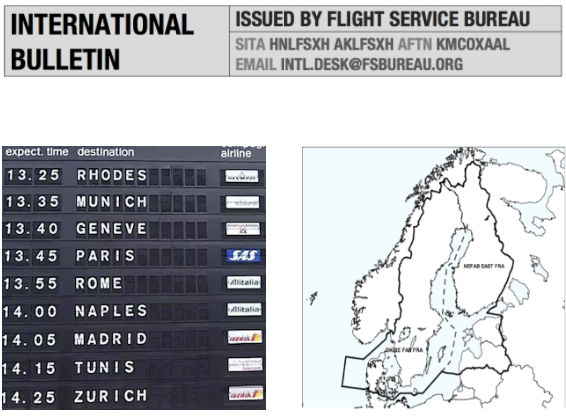 
US and Canada may lose EU visa rights 13APR The European Commission published warning on 12APR that visa-free travel by US and Canadian citizens to Europe is at risk, due to the lack of a full reciprocal arrangement for EU citizens. Read the full article.

More Free Route Airspace for Northern Europe 13APR Sweden, Finland, Denmark, Estonia and Latvia will be increasing free route airspace from 23JUN16. This allows operators to utilize User Preferred Routes above FL285. Details of the implementation can be found through the AIC A3/2016 from Sweden.

RKSS/Gimpo is set to open South Korea’s first purpose-built FBO next month. It includes a passenger terminal with customs and a large hangar that can accommodate up to eight large jets. The FBO is a partnership between Korea Airport Crop and Avjet Asia.

KZZZ/USA New security measures in the U.S. are being enacted in response to the Brussels Airport Bombings. The Senate voted to increase the vetting of airport workers, expand the number of TSA viper teams that sweep through airports unannounced to stop and search suspicious people, and double the number of TSA’s bomb-sniffing dogs. Also, local law enforcement may also conduct random checks of cars and taxis heading towards the airport.

KZZZ/USA the FAA has provided its NextGEN update for 2016. It highlights all the completed items along with the expected achievements for the year. You can find all the info through the NextGEN website.

EZZZ/Europe as of 05APR Eurocontrol as been publishing Target Time information together with Calculated Take-off time (CTOT) in the Slot Allocation and Slot Revisions Messages (SAM and SRM). The purpose of the initiative is to provide flight crew with operational awareness of their flight’s planned time at the congestion point in the air, rather than solely providing the corresponding delayed departure time (CTOT) to implement ATFM measures.

EGZZ/United Kingdom A large scale military exercise named ‘Joint Warrior 16-1’ has been taking place since 09APR16 and will last until 22APR06. EGPX and EGTT FIR/UIRs are affected. However, low to medium impact on airline operations is expected.

EGGX/Shanwick OCA implemented a trail of 5 minute separation minimum between aircraft which are following the same track, irrespective of whether they are East or Westbound. Full details can be found through AIC Y 022/2016.

LOWW/Vienna every weekend until 24MAY16 LOWW will be operating under single runway ops beginning 2100 on the Friday until 1600 on the Sunday. The closures are weather dependent and the closure will be recalled if the forecast calls for the use of runway 11/29. In any single runway scenario use at Vienna delays are a guarantee.

OEZZ/Saudi Arabia The U.S. State department updated a travel warning to Saudi Arabia on 11APR16. It outlines the risk to travellers due to an increased risk with the threat of terrorism.

LTCC/Diyarbakir is now able to handle international flights due to a new terminal building that has opened.

OLBA/Beirut two airport employees were detained on suspicion of terrorist activity involvement on 08APR16. Traces of explosives and a handgun were found on the two individuals.

DIAP/Cote D’Ivoire has reduced the passenger departure tax by 50% and have also removed the solidarity contribution tax levied on airline tickets.

GABS/Mali began renovations last month (MAR16) to increase the airports capacity to handle 1.5 million passengers which is up from the 800,000 annual passenger traffic. The project is expected to be completed by the end of the year.