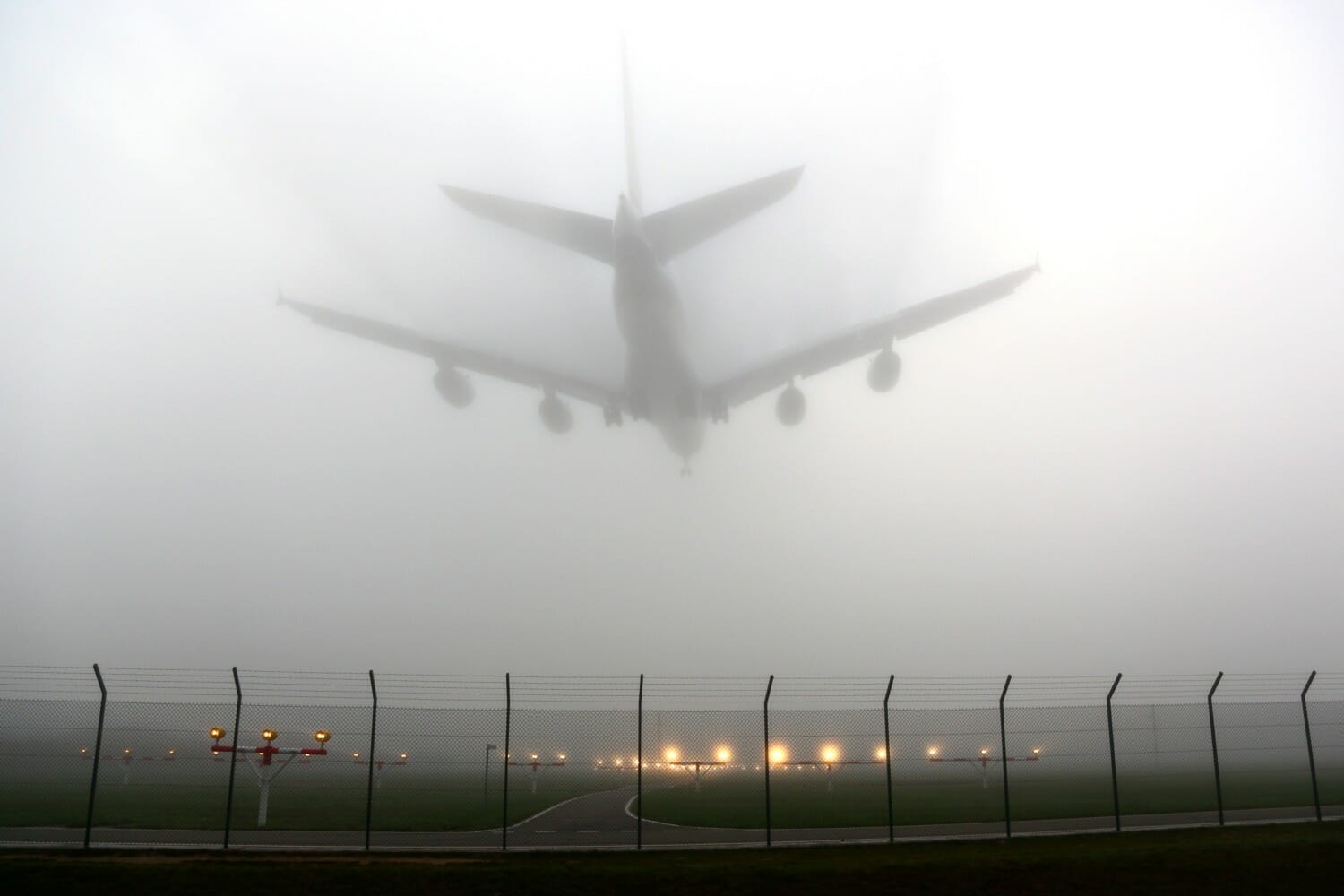 Unstable Approaches: Why Aren’t We Going Around?

Unstable Approaches: Why Aren’t We Going Around?


Late last year, IATA put out a bulletin noting that the number of unstable approaches in 2020 was a lot higher than in previous years.

Look a little further back and you’ll see this has been a trend for some time now.

Fly the line and it’s not hard to see why we are getting unstable – there are a bunch of reasons including weather, other traffic, challenging clearances, complex airspace, fatigue and even currency given the state of the industry, to name only a few.

So what’s the big deal?

IATA also know that in most cases, we’re not going around.

The numbers don’t lie, and they’re scary. Get this – a recent study estimated that 97% of unstable approaches flown in IMC didn’t fly a missed approach. That’s huge.

The leading cause of aviation accidents worldwide are runway excursions. The Flight Safety Foundation looked into all of them over a fourteen-year period and found that 83% of them could have been prevented by a go-around. That’s over half of all accidents recorded. It’s a big deal.

What do we actually mean by ‘unstable’?

In a nutshell it is any approach that doesn’t meet the stable approach criteria in your SOPs by a certain height – usually 1,000 feet off the deck. And it’s not just the ones that have gone badly wrong either – the criteria are usually pretty tight… 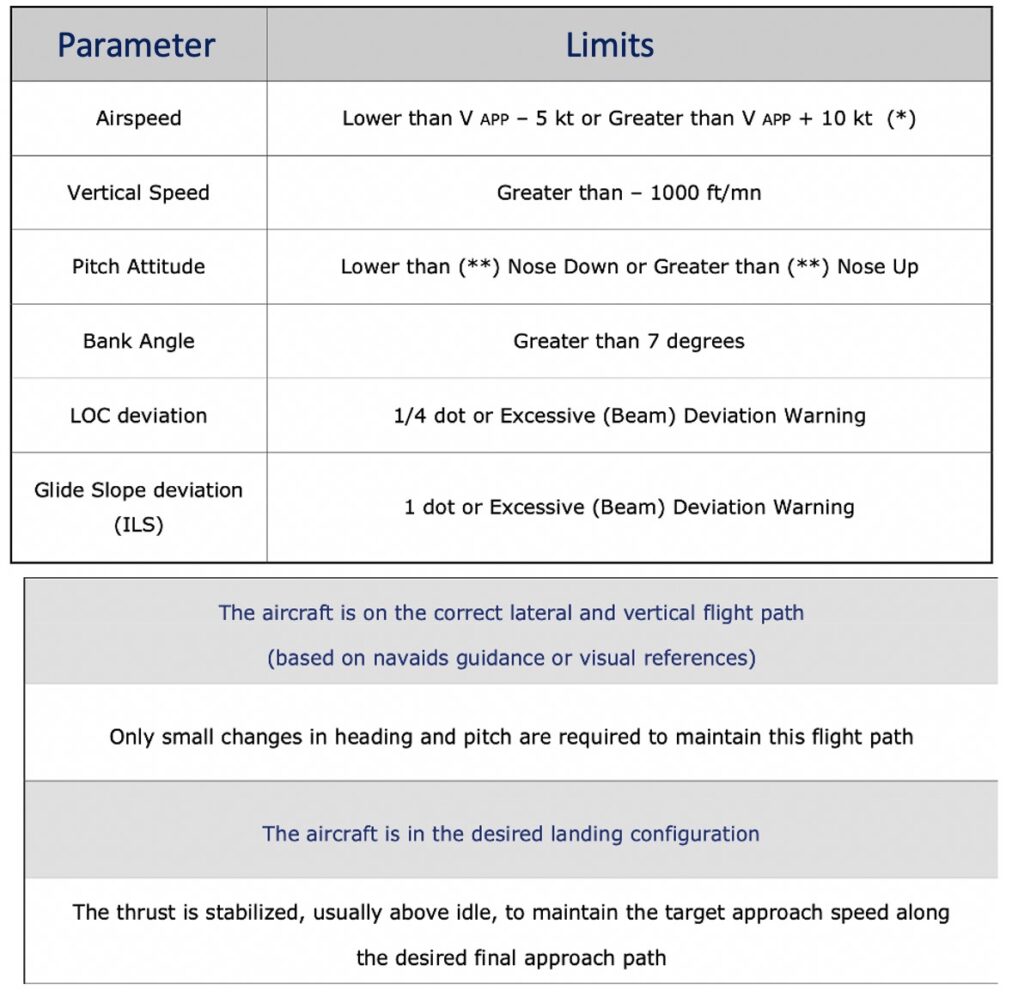 Example of typical stabilised approach criteria to be met by 1,000 feet off the ground.

Like the picture, the decision appears to be black and white: If you don’t meet the criteria, you have to go-around.

So why aren’t we doing it?

Good question. There are a bunch of factors but the most important is pilot psychology. Either consciously or sub-consciously we are making a decision to not go-around. Here are some suggestions about what may be happening inside our heads.

Which means we’re mission-orientated. We want to get in and we don’t like conceding defeat. Nor do we enjoy being reminded that we have reached the limit of our ability to fix whatever has gone wrong.

Experience also tells us that if we persist a little longer we can re-stabilise. After all a little speed brake, a little more sink rate you’ll have the thing back on rails long before the runway out the window is too close for comfort.

The problem is we’re fixating on completing the mission.

Studies have shown this behaviour is insidious. It creeps up on you and you begin to normalize the risk. Just like a speeding driver arriving home unscathed, the danger becomes typical. But it gives you far less capacity and room to deal with anything unexpected.

A go-around is a normal procedure, but boy do things happen quickly. It’s okay when you know it’s coming. But it’s when you’re off the script that they get especially challenging. Especially after something stressful has already happened.

Studies show that pilots are more reluctant to go-around in scenarios they haven’t practiced. This includes when the aircraft is only partially configured or is very low to ground (such as a bounced landing or botched flare). Complicated airspace and procedures can also be major deterrents to hitting those TOGA switches.

3. What the other guy/gal thinks

Everyone’s personality is different, and we don’t always get along. You might like a good book, while your offsider might prefer a good base jump. When it begins to matter is when it affects safety.

We react differently depending on the dynamic with the other pilot. This can include embarrassment at going around, a lack of support for the decision or disagreement with whether the approach can be safely salvaged. But if you begin to see a go-around as a reflection of your abilities, you are already on a slippery slope. Add an offsider who might judge you for going around and you’re in for a dangerous ride together.

Cockpit gradient is another contentious issue. Too steep and it can turn a multi-crew aircraft into a single pilot one. Age, experience, rank or culture can all contribute. Take this animation of a visual approach on a calm sunny day in San Francisco a few years back. Watch the animation and decide when you would have said something. There were two Captains and a First Officer on the flight deck.

The elephant in the room. No one is pointing fingers but now more than ever operations need to run on the ‘scent of an oily rag.’ Fuel is a big part of that. Crew may be encouraged to carry less of it in the first place which can lead to  fuel anxiety and reluctance to go-around. Or it may be the simple economic cost of using it compared to trying to re-stabilise an approach. It’s no secret that go-arounds use a lot of fuel.

Other factors may come into play too – scheduling, delays, an unwanted diversion or even duty time limits. There are a bunch of external factors which can creep their way into the flight deck and affect our decision making.

So what can we do to improve our Go-Around decision making?

IATA have made some solid suggestions:

1. Make the decision as early as you can. Historically, accidents that follow a decision to go-around usually reflect a late decision. Don’t wander down that garden path. Lion Air Flight 904  serves as another example.

2. Brief the heck out of them. Every time.  Make sure you include what you will be looking for to continue the approach, what may make a go-around more difficult on that particular day and how you will get around those challenges.

3. Encourage acceptance on the flight deck that a go-around is a possibility at any stage. Always prioritise the safest outcome.

4. Follow those SOPs. Operators should always have a mandatory requirement to go-around when stable approach criteria aren’t met. On the flipside, there should never be any punitive reaction to a crew’s decision to go-around. They show good decision making.

5. Fuel policy. Have one which always allows for go-arounds and accept they are a necessary cost of operating an airplane out there.

Up for more reading?

It’s a big issue so there are plenty more places to look. Here are a couple of really good links to get you started.