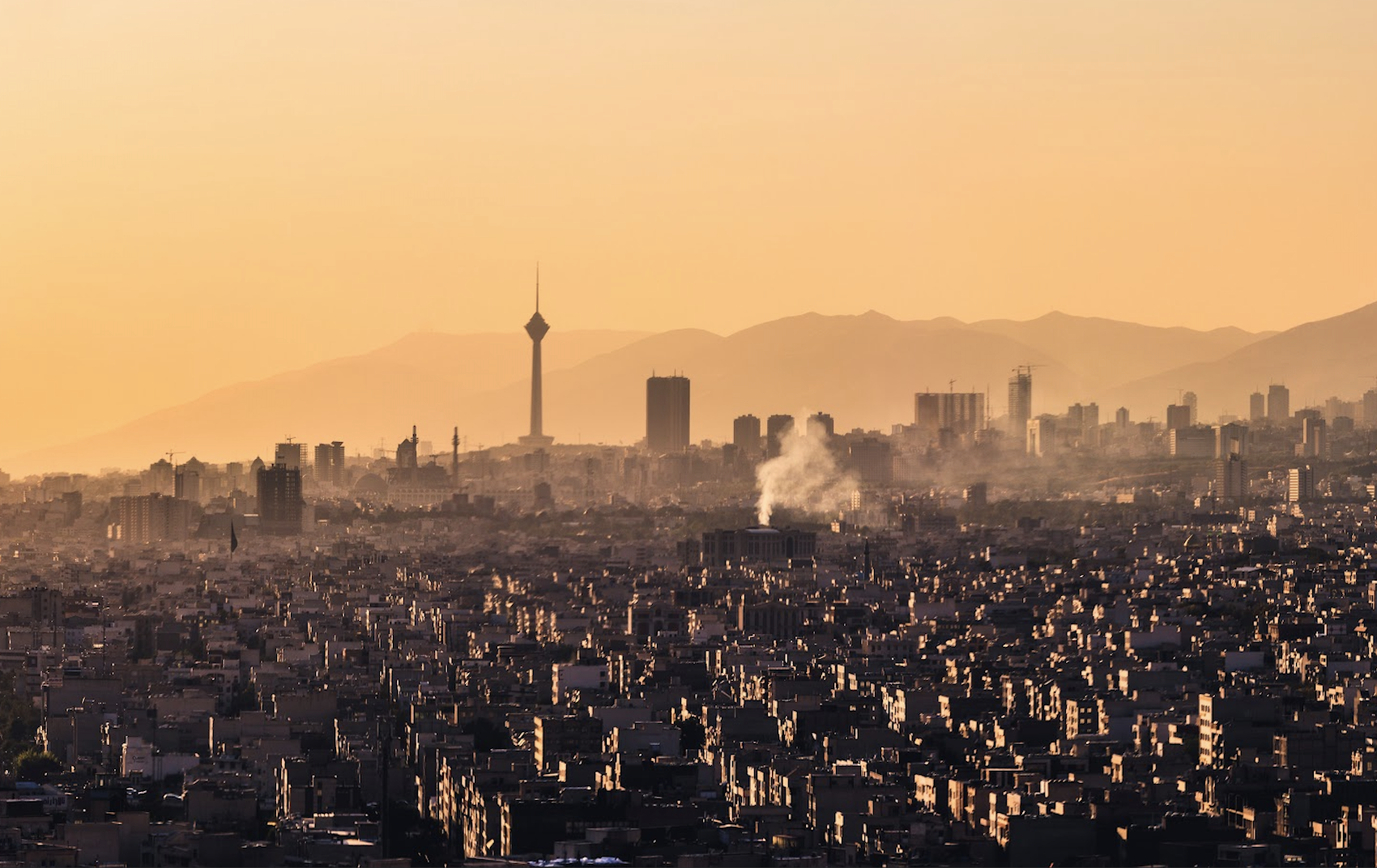 
If you are operating to OIII/Tehran Mehrabad airport then watch out – the minimum height thresholds might not be adequate.

Well, earlier in the year it was.

A Zagros Airlines A320 operating from OIAW/Ahvaz to OIII/Tehran Mehrabad was cleared the SAVEH 1N arrival and descended, under radar control, to 6000 feet. They were then vectored to the KAZ NDB in order to intercept the ILS for runway 29L.

Which was when they received a terrain alert and “pull up” order.

A quick look at the radar minimum altitudes and there are a lot of high ones – there is a lot of terrain. The adjacent sector is 7,500′ but ATC take aircraft down to the 6000’ (which covers the sector over the airport), and depending on where you arrive from this can be an issue. 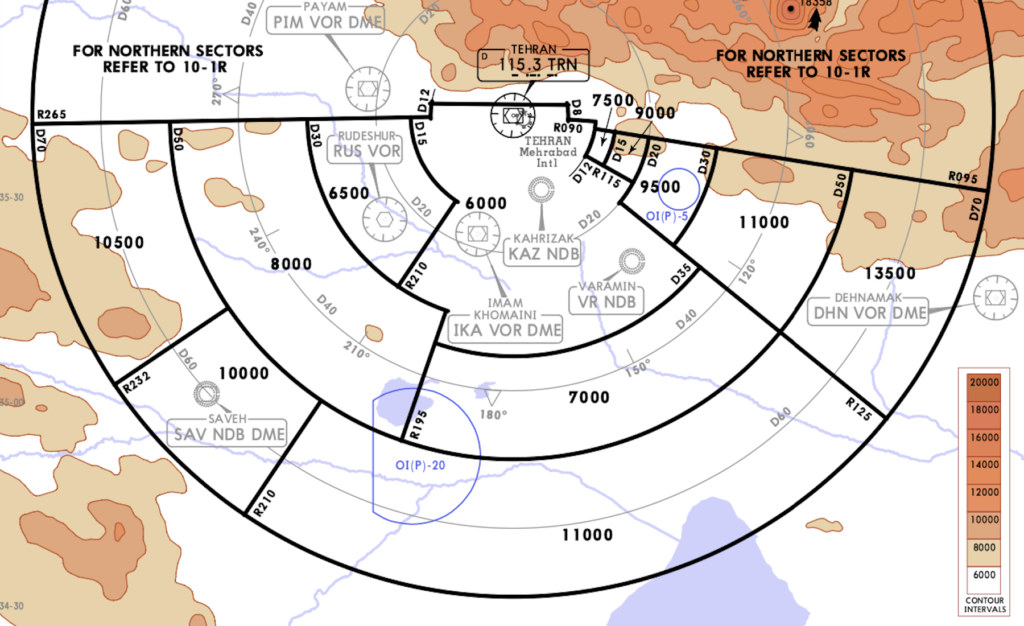 There is a 5,036 foot hill sitting in close proximity to the ILS approach, called Bibi Shahrbanoo. For ATC to ensure you are not too high for the ILS, they manage your descent down to 6000′, but that 6000’ doesn’t actually provide the typical 1000’ separation if you are near Big Bibi.

Combine all this with a higher rate of descent and you might get yourself a GPWS warning. The Zagros airlines incident was not the first.

Have they fixed the problem?

Well, Tehran’s runway positions and terrain make it a complex spot to decide what heights should be used, but it does appear that they have looked into it a bit more since a significant number of new charts have been published of late, with validity dates of October 1, 2021.

So let’s play spot the difference… 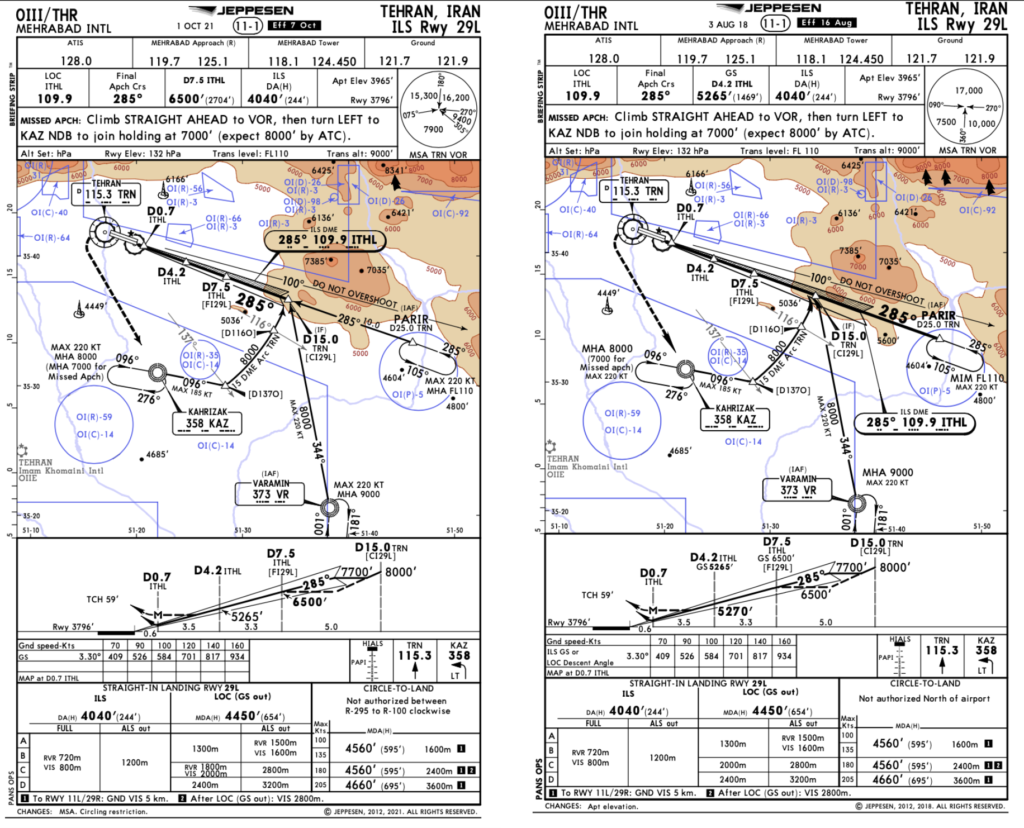 The circle-to-land restrictions have been revised, and they have also amended the FAP – it is now set to D7.5 and 6,500’ as opposed to D4.2 and 5265’ which was pretty low given the hills around.

You might also notice (at least on LIDO) a certain 5,600′ point from just beside the inbound course has now been removed… surprising given the hill is, presumably, still there.

This is a tricky airport anyway

The glide slope here is a slightly steeper 3.3°, and you only have precision approaches for runway 29 – runway 11 involves a fairly hideous circling approach.

The area is riddled with both high terrain, and also restricted and prohibited areas, so accurate navigation is important.

The conditions in Iran can be hot, and your elevation is high – 3965ft, leading to higher speeds, and higher rates of descent required. Having this in mind, monitoring your ROD and being aware of the GPWS risk is probably the best mitigation against warnings.

Runway 11R/29L is currently closed for “recarpeting” (not a Persian rug joke, it really is what they call it). So keep an eye out for temporary charts and WIP notams. The runway is closed until March 2022 and the latest AIP SUP 27/21 covers it.

There is also a lot of GPS Jamming across Iran and there are some significant airspace safety concerns to take into account.

It’s not the only spot to worry about

OIIE/Iman Khomaini is the “main” Tehran airport and to be honest, if you are heading to OIII/Mehrabad airport (a.k.a the “other” Tehran) it is probably because you are using it as an alternate for OIIE. The terrain threat at OIIE is marginally lower than OIII, but still requires prior consideration before jetting in – as do most airports in Iran.

While you’re at it, checking the Notams is a good idea too – OIKK/Kerman, for example, has no less than 34 cavities on one side of one of its runways. OIII/Mehrabad is better maintained (just 1 hole related Notam to be seen).