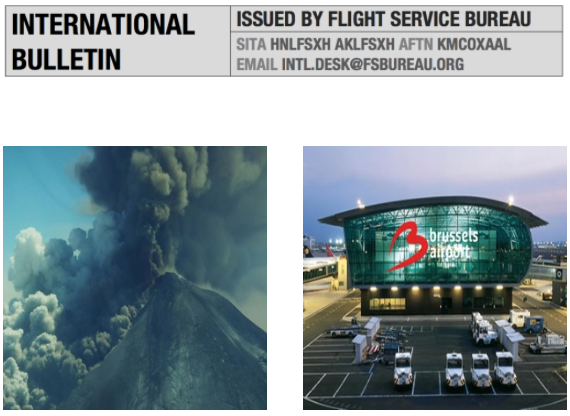 
Pavlof Eruption wreaking havoc 30MAR16 Volcano Pavlof erupted on Sunday and is currently on aviation colour code ‘RED’. It has caused havoc for North Pacific, Alaskan and Northern Canadian operations. The latest predictions have the ash upwards of FL400 and extending over Northern Alaska and Canada. You can find the latest information through the Alaskan VAAC.

Brussels Airport remains closed 30MAR16 EBBR is still closed with the possibility of opening later this week. Currently all commercial flights are still prohibited from operating into EBBR. Only ferry, emergency, SAR, State, general aviation and cargo flights are authorized with a slot that can be coordinated through the Belgium Slot Coordination website.

EZZZ/Europe The U.S. State Department along with numerous other countries have issued a Europe wide travel warning in response to the attack in Brussels. While extra vigilance should be exercised it is also a very generic response to a threat that has yet to fully understood from a commercial aviation perspective. If you would like to be kept up to date on specific travel alerts from the U.S. State Department you can sign up through their STEP program.

FAA/United States there have been 583 reported hazards from Aug 22/2015-Jan 31/2015 between aircraft and Drones. None of these incidents have caused any collisions or damage but extra vigilance must be exercised until the FAA can regulate the use of these drones in the terminal areas.

LFXX/France a general strike has been declared for March 31st. Possible impact to airline operations. Please make sure you check with Eurocontrol or FIR NOTAMs for further restrictions.

FXXX/Nigeria The NNPC or Nigerian National Petroleum Corporation has stated that steps are currently being taken to end the countries fuel shortage but may take upwards up 2 months. Please check with local handlers for the availability aviation fuel supply until the issue is resolved.

LXXX/Turkey has issued a nationwide terror alert and the Israeli Counter-Terrorism Bureau has advised for all of it’s citizens to leave the country. Extra vigilance should be exercised if operating to and from Turkey for the foreseeable future.

UXXX/Russia has stated that aviation authorities are intensifying it’s inspections of aircraft from Russian and International budget carriers in wake of the Rostov-on-Don accident.

DGAC/Ghana FIR issued NOTAM A0128/16 due to VHF freq 130.9 being not reliable for all Oceanic traffic entering ACCRA FIR from the South East due to maintenance. All traffic must contact ACCRA on HF 8903KHZ or logon to ADS-C/CPDC “DGAC” until positive VHF contact is established.

VNKT/Katmandu There have been a few reports that the Tower at VNKT has been reporting erroneous weather to pilots. One example of such a report  was “Tower informed us that there was some 3 km of visibility this morning but it to be less than 1.5 km while Kathmandu was engulfed by haze”. If you encounter any issues while operating into VNKT please send us a note to bulletins@fsbureau.org.

VTBD/Bangkok Officials approved an expansion that will allow for more aircraft, passengers and vehicle parking. The plan also includes provisions to cut landing fees during off-peak hours at VTBD and VTBS in an effort to increase usage of both airports. The project includes plans to extend the runway, add office buildings, and create additional parking zones for aircraft. The expansion is expected to be completed in 2025.

Angola The Ministry of Health in Angola has reported an ongoing outbreak of yellow fever in Luanda Province. The government of Angola requires all travelers older than 9 months to show proof of yellow fever vaccination on arrival. The CDC has a ‘Watch Level 1, Practice Usual Precautions’ advisory in place.

FAA/United States has issued Advisory Circular 00-30C. It describes the various types of CAT (Clear Air Turbulence) along with avoidance techniques and possible future forecast systems for helping Dispatchers and Pilots in the planning stages for proactive flight planning.