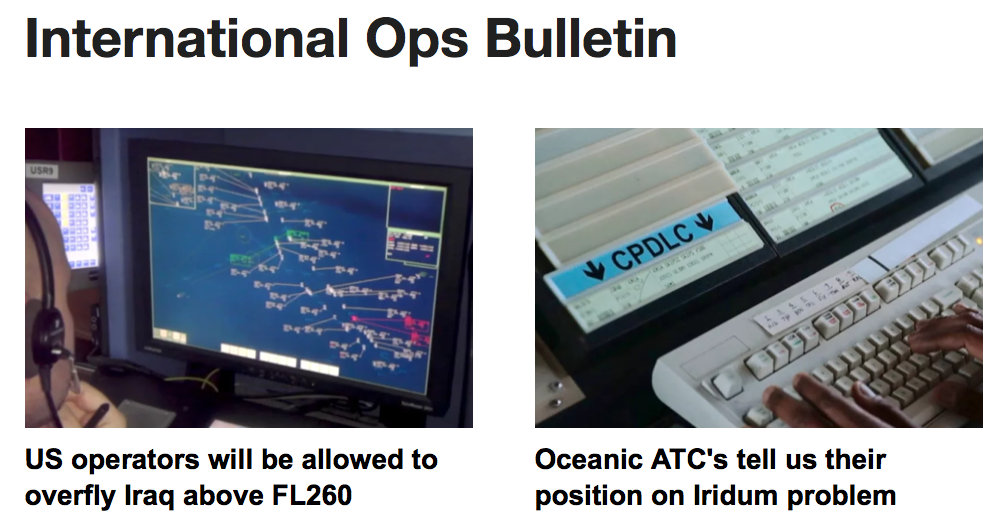 EGGX/Shanwick Formidable Shield is over! They managed to run four exercises in total – on 25th Sep, 7th Oct, 15th Oct and 17th Oct – all of which closed vast areas of NAT airspace to civil ops. They were thinking about doing a fifth exercise, and maybe re-running another, but in the end they didn’t have enough time to squeeze them in. Back to normal for the NAT Tracks. Read the article.

VIZZ/India has new crew visa requirements – a Visa upon arrival is no longer available.It is now mandatory for all crew to have visas arranged before arrival to India. When flying as operating crew you will need an e-Business Visa. Carry a copy with you when disembarking. Processing time is around 4 to 5 days, and you can apply online. Keep in mind that the e-tourist visa is for pax only. Read the article.

OMAE/Emirates FIR On October 12th, GCAA announced the changes to the OMAE FIR. They’ve got it all detailed in the latest AIC. The major change: all aircraft require RNAV1 with GNSS to operate in the Emirates FIR, starting December 7th. This is a change from the previous RNAV5. With that, you can expect changes to SIDs, STARs, all ATS routes, holding procedures, communication frequencies, and others. It’s a major overhaul to anticipate for the expected increase in traffic. Read the article.

LFMN/Nice The airport will be closed for runway repair overnight between 2130-0400z from 6-11th and 13-18th Nov. There’s no Notam out there about this yet. Expect one soon.

EGGW/Luton will be closed for 27 nights from 0000L to 0530L daily, starting Monday, November 6th and ending the morning of Sunday, December 3rd, 2017 for runway resurfacing. Standard operations will be practiced outside of these hours, with little to no disruption expected during daytime.

TXKF/Bermuda Non-radar procedures are in effect for a few hours each day over the next few days, as they’ll be testing their new radar equipment, following damage sustained during hurricane Irma.

LTAA/Ankara will no longer accept ORSU/ORER traffic. This looks like a response to a request made a couple of weeks ago by the Iraqi govt, replacing the Iraqi embargo on international flights in/out of the Kurdish region, which appears to have been removed from the ORBB Notams. Iraq are restricting the airspace to the West due to the Syrian conflict, Iran banned flights from these airports weeks ago and now Turkey have followed suit. The only access to these airports is now from the South via Baghdad.

KZZZ/United States A new travel ban was to come into effect on Oct 18th. A Hawaiian judge has again ordered a temporary restraining order on the ban preventing it from being enforced. Countries placed on the ban are: Chad, Iran, Libya, North Korea, Somalia, Syria, Venezuela & Yemen.

MUCC/Cayo Coco remains closed following damage sustained by hurricane Irma, and is not expected to re-open until late October

TTZP/Piarco CPDLC will be out of service until the end of the year. All voice comms must be made via New York Radio. Aircraft are requested to log on to TTZP for ADS-C position reporting.

LFBO/Toulouse Fuel available 0530-1700z, outside of these times bring your own as the fuel strike is ongoing.