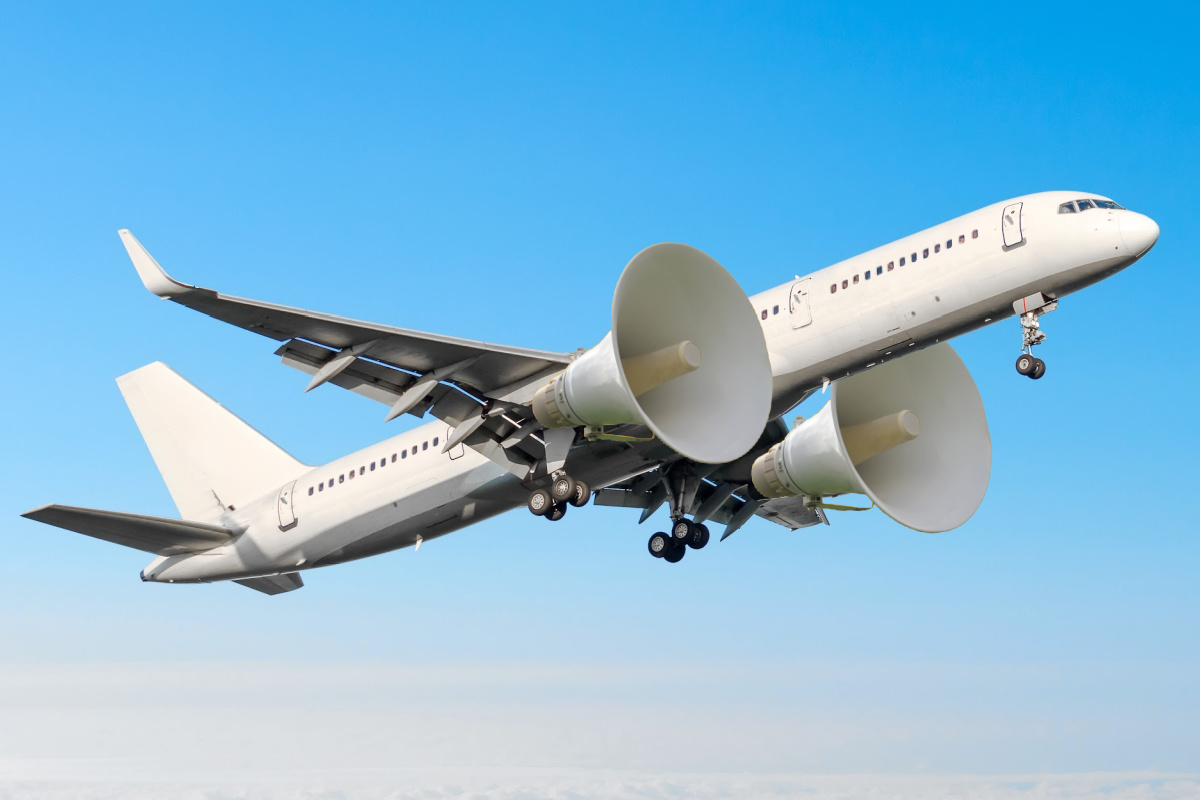 Shush! Keep the Sound Down!

Shush! Keep the Sound Down!


Sometimes, folk who live in and around airport areas get cranky because, well, airplanes are quite noisy. So airports have some methods in place to help reduce complaints – noise sensitive areas, decibel monitoring, night flight restrictions, noise level regulations, and the thing we’re going to look at in this post – noise abatement procedures.

Where do we use noise abatement procedures?

These are fairly boring though, and by boring I really mean fairly obvious. A noise abatement routing just doesn’t fly you low over sensitive areas. Noise abatement approaches generally say stuff like “try and do a CDA” or “don’t fly level for more than 2 nm” or “don’t fly in with all your flaps dangling out from 10,000”.

EGLL/London Heathrow has a particularly exciting bunch of rules for the arrivals and approaches (probably because English people really like to complain a lot) if you do want to check these out.

For folk who’ve been around a while, you might remember TKOF Proc A and B. Well, forget ‘em. They don’t exist anymore.

Actually, just checked and some random airports do still use these, but most use NADP I or NADP II so that’s what we’re going to talk about.

Also known as the “close in” procedure, this keeps folk living directly next to the airport, and birds and things happy.

You take-off, reduce your thrust at 800 feet (that’s above ground level!) then climb at a speed somewhere between V2+10 and V2+20 to 3000 feet, at which point you accelerate to your en-route climb speed.

Accelerate smoothly is what it actually says, and as you do it, retract them flaps and slats and any other dangling bits you have hanging out. 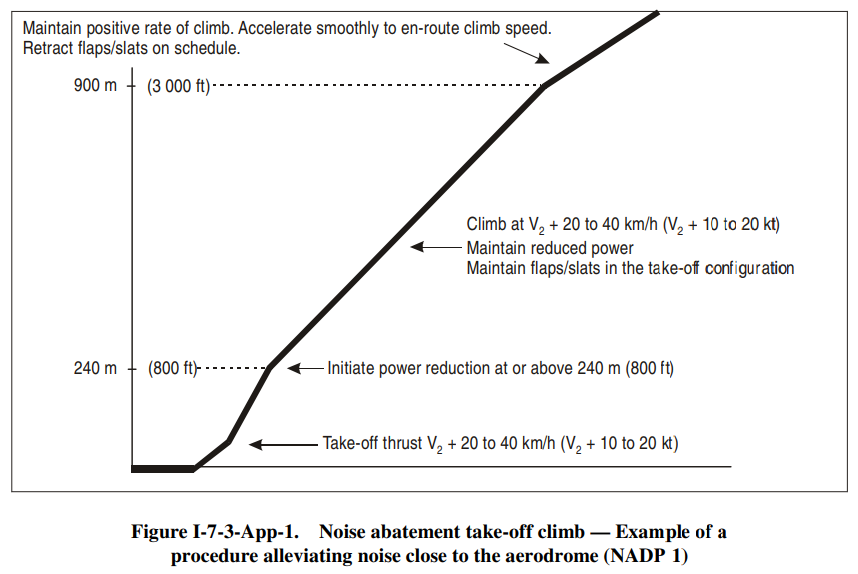 The “distant” procedure. Although not that distant.

This one has you take-off and at 800 feet you clean up all the sticky-outy stuff, and then you reduce your thrust and fly at your Vzf speed. Which is probably something near to your minimum clean speed. So climb away at something safe and sensible, until you get to 3000 feet, then accelerate. 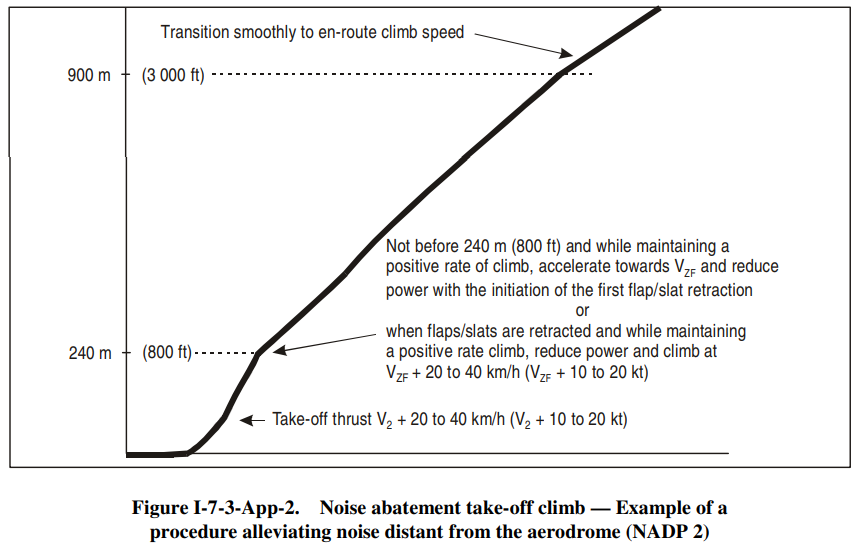 Right. You knew that already. So why are we talking about them?

Well, you’d be surprised how many people don’t entirely ‘get’ NABTs. There are a few pointers to consider to as well…

Some questions (and answers).

These are based off genuine questions folk have asked on this subject. The answers are what we’d have given if they had sent those questions directly to us.

V2+10 to 20 knots is too slow and my aircraft will buffet and potentially stall.

No, it won’t! V2 is literally called your “takeoff safety speed”. If it’s gusty and windy out then you have a margin there anyway. If it’s windsheary out then you can disregard the procedure. But no, flying at V2+anything is not going to result in your aircraft stalling.

20 degrees + nose up is uncomfortable for my passengers.

Again, margin. You don’t have to rocket climb, and you can adjust the procedure for your aircraft type. Just use a little common sense. If you’re light and empty and tiny and quiet then do something appropriate.

An engine failure at V2+15 with huge nose up attitude would cause a dangerous yawing motion and stall if you’re not on top of it.
Presumably V2+15 is above VMCA? Yes, it is. Which means no, it won’t cause a dangerous yawing motion and make you stall, unless you don’t know how to handle an engine failure. Which you should because we practice them all the time. Also, surprisingly, this is actually something the aircraft manufactures test.

Departures with larger flap deflections are bad for the flaps.
I checked and there is no flap warranty sticker saying “don’t use me for more than x number if flights or I might get all wobbly” attached to the flaps of my aircraft, or stuck anywhere in the FCOM.

These procedures are designed for a 777 taking off at MTOW, not my little Embraer G-whatever.
Actually, they’re designed to ensure noise limits are met. They are regulatory procedures so follow them, or get something approved in your OM-A as an alternative. A lot of Aircraft Operating Instructions do specify that NABT departures are based on a certain climb rate that needs achieving, for example. So you don’t have to blindly apply NABT I if you can meet the requirements without it.

I won’t be able to meet the climb constraints if I follow the NABT procedure.
It’s unlikely you’re going to find a NABT at an airport that has incredibly horrifying terrain right at the end of the runway. But if there is, the best way over that terrain is going to be to climb at the best rate you can. Which probably isn’t going to be altogether that different from what the procedure requires anyway.

If you really do find somewhere where the NABT procedure will genuinely impact your safety margins, then safety is the priority and you might just want to tell ATC about it before taking off to avoid some hefty fines.

So there we go…

The Opsgroup guide to NABTs. If you’re still unsure then here are some handy references to read: