We have started a Facebook group to share information. If you are involved in the relief effort, planning to fly, or have information to share, please join:

Thurs 1.45pm ET  Freeport is reportedly operational.  Only operating with Nema coordination. US NAVY ‘WARLOCK’ is managing the frequency to coordinate traffic in the area. Frequencies 303.0 and 136.37.

Weds 5.30pm ET Runway and taxiways are no longer flooded. Everything is above water. Most buildings are showing flooding damage but the hard surfaces all appear intact. Currently helicopter only, but may be suitable for fixed wing shortly.

Note: CNN reports that the Freeport Airport has been ‘destroyed’ are inaccurate. The images seen in the media are of the Western Air terminal, which was indeed severely damaged, but the main buildings are mostly OK.

Thurs 2.20pm ET  Operator report: Our first flight was with supplies to Sandy Point, returning with evacuees. The second flight is dispatching now. We worked with NEMA late yesterday to assure security would be in place at Sandy Point prior to our dispatch. On arrival we found two police officers overseeing operations and a local government official (council woman?) who was coordinating the off-loading of supplies and approving passengers who boarded our flight. 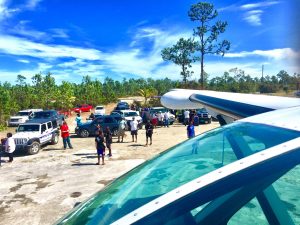 Weds 5.30pm ET Lots of GA traffic arriving/departing the field. Looks like the fuel truck is operating, too. We only did a low approach to assess the runway, but it appears clear and is certainly being used as of 9/4 17:30 EST.

Thurs 5.30pm ET  We have been notified by the Commonwealth of the Bahamas Ministry of Health that the docks and airport MYAM have been re-opened today. Notam/TFR’s remain in place and require advance approval of Bahamian NEMA before operations into this area. There are substantial delays into/out of MYNN in-air holds as well as ground holds at departure points as MYNN deals with the bottleneck of relief flights on top of routine traffic. It’s a mess out there. 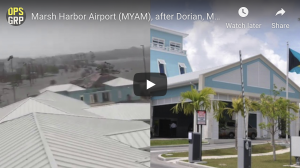 If you have information, please share with us at team@ops.group, or use the form above. Thank you.