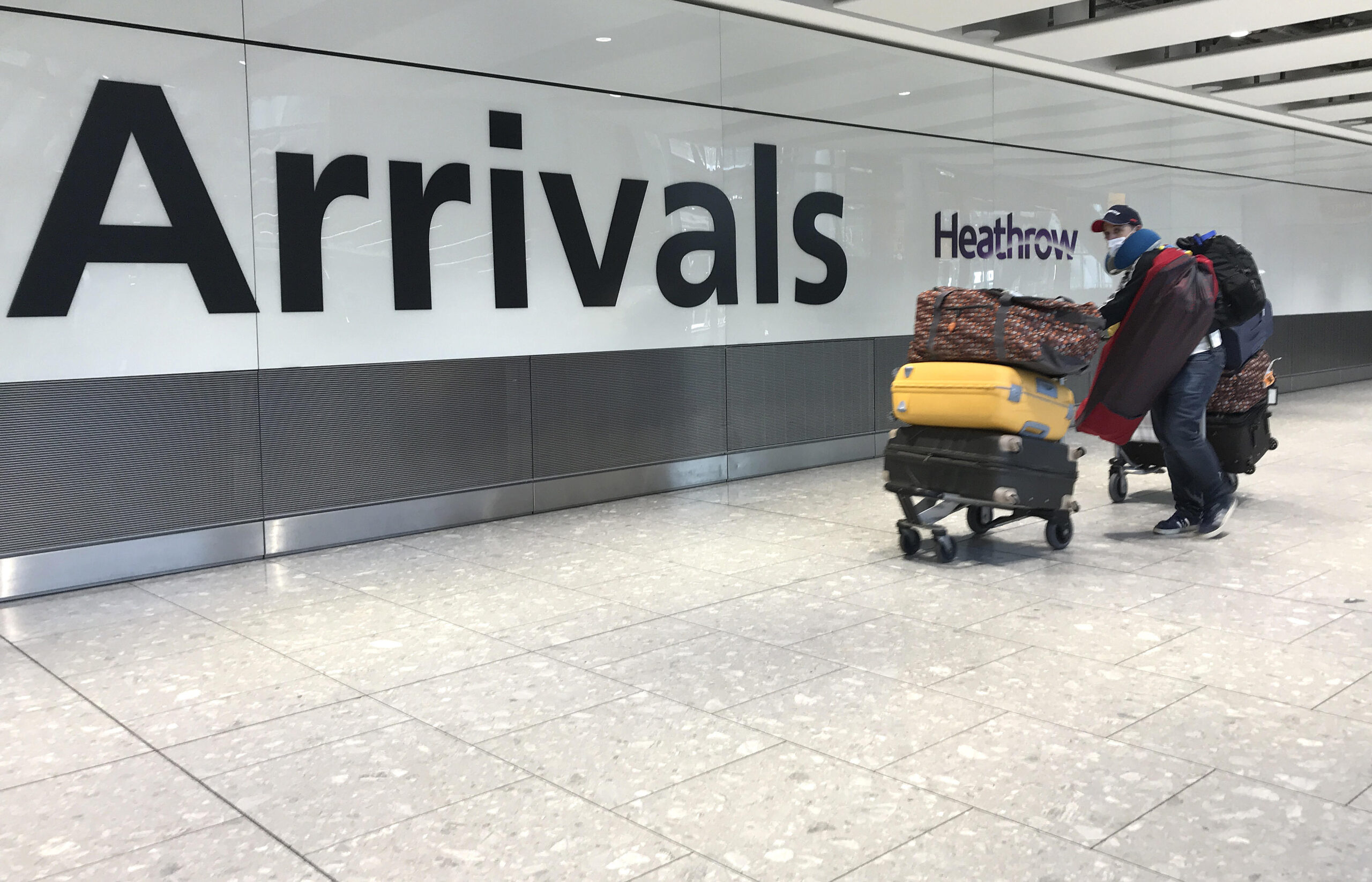 The UK has announced that from June 8, all inbound travellers will be required all to enter a two-week quarantine period.

Arriving passengers – including UK nationals – will have to provide an address where they will remain for 14 days. Staying in hotels or with friends or family is allowed. The UK has published a long list of exemptions from the self-isolation requirements, which includes flight crew as well as all passengers arriving from Ireland and the Channels Islands.

The list of exemptions suggest the positioning crew will be exempt from the quarantine rules as well. The definition of “crew” is defined as follows:“Crew, as defined in paragraph 1 of Schedule 1 to the Air Navigation Order 2016(h), where such crew have travelled to the UK in the course of their work.” For crew seeking an exemption from the quarantine, the government site says that you’ll need to provide your journey and contact details, and should show a crew badge or ID.

It’s up to each country in the UK to decide how they will enforce the quarantine for arriving passengers; but in England, leaving isolation prematurely could result in a fine of up to £1,000 or prosecution.

With the government asking everyone to avoid public transport, booking some private transport to take you directly to/from your hotel is advisable. Most airports are also encouraging or mandating the use of a face covering for passengers, crew, and staff – bring your own if you can, but some airports will be handing them out at terminal entrances for departures and at immigration for arrivals.

These new quarantine rules come on the back of another new procedure introduced on May 18, which all operators flying passengers into the UK must comply with. You can view the full government-issued guidance here, but here’s how it works:

First off, there’s a little speech you need to make prior to letting your pax off the plane. The UK government has written the script they’d like you to read – wash your hands, don’t touch your face, that kind of thing. Here’s the little blighter: 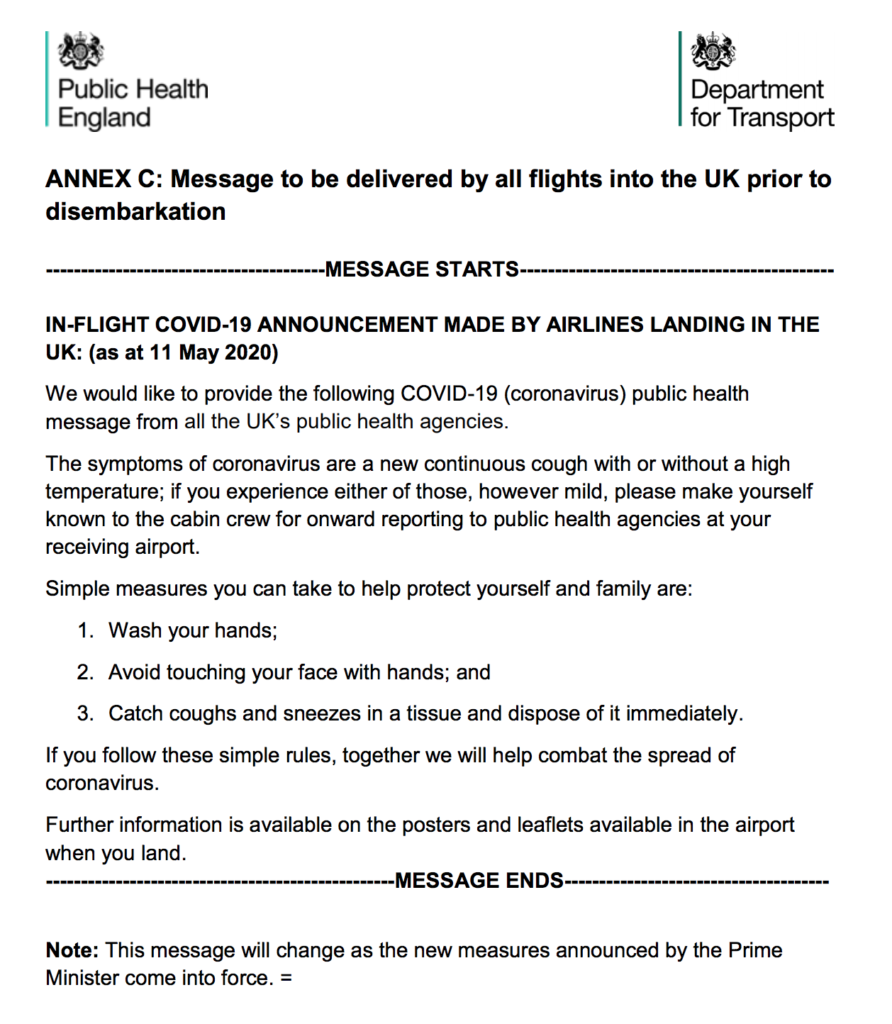 All inbound flights must also file a General Aircraft Declaration (GAD), confirming that they’ve got no symptomatic pax on board. Here’s a copy of this form, which you can download from the UK government site: 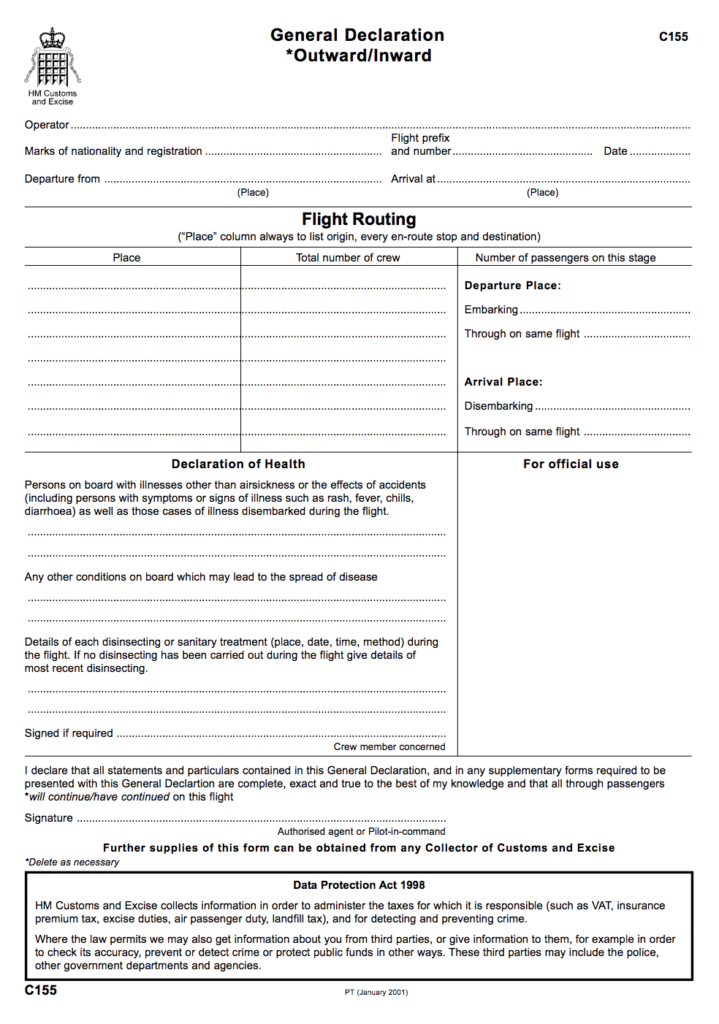 The Health Control Unit at Heathrow are the people you need to send this GAD to (heathrow.hcu@phe.gov.uk) – as well as the local authorities at whichever airport you’re flying to. Here’s how it’s supposed to to work:

As far as the aviation industry is concerned, airports are still open and accepting flights. The vast majority of traffic includes cargo, medical, humanitarian, and repatriation flights, with leisure and business traffic all but dried up.

The status of airports across the UK remains inconsistent, with some open, some restricted, and some closed. The key airports have published the information below, and you can always find further airport information by asking our bot, George, on the #george channel on Slack.

EGLL/Heathrow: Heathrow remains open, having consolidated down to two terminals from the usual four, and scaled down to single runway operations. Standard operating hours of 0430-2300 (local time) are in force. The runway in use alternates each week and information can be found at www.heathrow.com/noise

EGLC/London City: London City airport remains closed to all traffic, though plans to reopen by the end of June.

EGKK/Gatwick: Gatwick remains open between 0600-2200 (local time) but the few flights still operating are out of the South terminal, with the North terminal closed. Outside of the operational hours the only flights allowed are emergencies and diverts.

EGGW/Luton: Luton remains open for GA flights. The airport is open 24/7, but individual handlers have different opening times (Signature is open from 0700-1900 local time). WizzAir has begun a select number of flights in the last few weeks, prior to which the passenger terminal had been closed.

EGLF/Farnborough: Open weekdays from 0645-2215, and weekends from 0745-2015 (all times local). An Opsgroup member has reported a useful thing to know about ops to Farnborough – any aircraft arriving from countries identified by EASA as “high risk” must provide a certificate of cabin disinfection on arrival. That means you have to do the do the disinfecting on the ground at departure airport, before you fly to EGLF – ask them for a certificate proving that it’s been done, with a valid expiry date showing. The regions/countries EASA deems as high risk can be found in the link here. It sounds like Farnborough is the only airport doing this, but if you know of any others, let us know!

The UK’s new quarantine rules are coming in just as several major European countries are lifting their own restrictions on inbound flights!

All non-essential travel into the EU area from outside the EU is currently suspended until June 15, but in the past few days many European countries have announced they will be gradually relaxing their restrictions for intra-EU flights.

Italy started allowing unrestricted travel to and from European countries, with no quarantine requirement, from June 3. More info

Cyprus will resume international passenger flights in two stages for a select number of European countries. During the first stage, expected to begin on June 9, incoming flights with be allowed from Greece, Malta, Bulgaria, Norway, Austria, Finland, Slovenia, Hungary, Israel, Denmark, Germany, Slovakia and Lithuania. Then on June 20, the second stage will begin, and flights from Croatia, Czech Republic, Estonia, Poland, Romania and Switzerland will also be allowed to enter. All inbound passengers must provide a valid medical certificate and are subject to temperature checks upon arrival. More info

Greece has announced it will start to allow international passengers in phases. Here’s how it’s going to work. Until June 15, we’re in Phase 1: the only passengers allowed to enter are EU citizens and residents; pax flights may only go to LGAV/Athens airport; pax flights are prohibited to/from Italy, Spain, Netherlands, United Kingdom, Albania, Northern Macedonia and Turkey. Then from June 15 to July 1, it’s Phase 2: pax flights from everywhere are welcome, but if coming from one of EASA’s “high risk” places there are still some quarantine requirements; LGTS/Thessaloniki will reopen. Then from July 1, it’s Phase 3: all other Greek airports reopen, and only random tests on arrival for all pax regardless of where they fly in from. More info

Germany will lift its travel ban for 31 European states from June 15, as long as there are no entry bans or large-scale lockdowns in those countries. That includes all 26 other EU states, the UK, and the four countries of the border-free Schengen area that are not members of the EU: Iceland, Norway, Switzerland and Liechtenstein. Germany has not yet decided how it will deal with countries outside the EU. More info

Switzerland has published Notams detailing some relaxations to entry restrictions coming soon. Until June 8, all foreign non-resident pax are refused entry; exemptions for transit pax and crew. From June 8, direct inbound travel will then only be banned from these countries: Germany, France, Austria, Italy, Spain, and all countries outside the EU/EFTA (i.e. Romania, Bulgaria, Croatia, Cyprus, Ireland, the UK). Then from June 15, they will allow travel from Germany, France, and Austria. More info

Spain has said that from July 1 onwards, foreign visitors to Spain will no longer have to undergo a two-week quarantine. Foreign nationals are banned from entry until June 15 (ultimately, the only pax who may enter the country are Spanish citizens and residents, or those heading home to their residence in another EU state). There’s no official word yet on exactly what will be allowed after that date, but it looks like Spain wants to gradually reopen to foreign passengers from late June – most likely Europe first, then everywhere else. More info

France wants to reopen its borders to other EU countries from June 15. Until then, France remains closed to all but essential travel. Anyone travelling to France needs to complete a declaration to be presented on arrival.

Iceland will relax its rules on entry from June 15 for pax from the EU, Shengen Area, or the UK – inbound travellers are expected to be given a choice between a two-week quarantine or being tested for the virus upon arrival. More info

For more updates on the latest restrictions for countries around the world, check out our dedicated Coronavirus Ops : Live page.