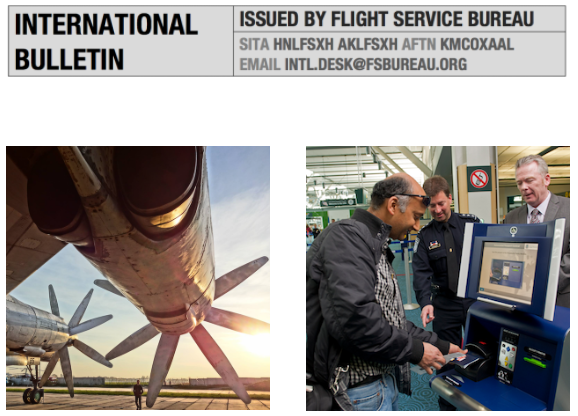 
High Seas Airspace – near misses 16MAR The Baltic Sea (Scandinavia) is seeing an alarming rise in traffic proximity events, and ICAO has issued guidance to operators with background and information. Military flights operating under ‘due regard’ are, well – not. Read the full article about High Seas airspace.

Canada New Entry Rules – relaxed 16MAR The new Canada Entry Rules – requiring most visitors to have an eTA before departing – came into force yesterday; with a caveat. In short: you should have one, but it’s OK if you don’t – at least until September 2016. Read the full article.

Cxxx/Canada The new Canada Entry Rules – requiring most visitors to have an eTA before departing – came into force on 15MAR; with a caveat. In short: you should have one, but it’s OK if you don’t – at least until September 2016. Read the full article.

Cxxx/Canada Effective 30MAR, Canadian rules will no longer require an approach completely independent of GNSS at the planned destination. However, where a GNSS approach is planned at both the destination and the alternate, the aerodromes will need to be separated by a minimum of 100 NM. Refer AIC5/16.

Baltic Sea Based on several concrete examples of missing flight plans, the Russian Federation, Finland and Estonia agreed to define 7 new waypoints for State aircraft operations over the High Seas that could be used, to replace the current string of LAT/LONG coordinates, to facilitate all future FPLs between St. Petersburg FIR and Kaliningrad FIR. The ICAO Secretariat assigned the following 5LNCs: PISIS-PIDINPISIM-PIRUX-PINIX-PIVAX-PIPOM. All involved States (Russian Federation, Estonia, Finland and Latvia) agreed to implement/publish these waypoints (all over the High Seas), for the 30 MAR 2016 AIRAC date. Read the High Seas Airspace article.

North Atlantic CPDLC and ADS-C services will be out of service in Gander, Shanwick, Shannon and Reykjavik FIRS on 21MAR for periods lasting no longer than a few hours due to Inmarsat satellite replacement work. Please check the FIR NOTAM’s that pertain to your operation that day.

Kxxx/United States Due to a missile launch from within Miami Airspace the FAA has issued NOTAM A0366/16 to advise of the potential impact to operations with KZMA, KZWY and TJSJ FIRs from March 16 to March 17th. Please check the NOTAM for full details on all the possible routing constraints.

LTXX/Turkey NATO has begun surveillance within the Turkish FIR as part of assurance measures for Turkey. The first duty period was 12-15MAR.

Time Changes Clocks go forward/back depending on whether you’ve just had a long winter or a long summer. The US changed on 13MAR, most of Europe is on 27MAR, Australia and NZ on 03APR. TimeandDate.com has a very useful list.

KTEB/Teterboro A new Charted Quiet Visual Runway 19 visual approach will be published on 31MAR. Starting 04APR, the FAA will test the procedure for 180 days to gauge pilot compliance and environmental impact to determine if the procedure will become permanent.

YMML/Melbourne will host the Formula 1 Grand Prix 17-20MAR, with additional traffic to both YMML and YMEN/Essendon during these dates.

KATL/Atlanta Officials in Atlanta are laying the groundwork for an expansion of the world’s busiest airport. Work will begin soon on a $6 billion expansion and renovation project at Hartsfield-Jackson Atlanta International Airport. Workers will update the domestic passenger terminal and concourses, and add a sixth runway and a hotel. Work begins on concourse renovations later this year.

Lxxx/Austria has issued AIC 4/16 outlining the near future use of more direct Free Route Airspace.

Oxxx/Iran The U.S. State Dept issued a Travel Warning to reiterate and highlight the risk of arrest and detention of U.S. citizens, particularly dual national Iranian-Americans, in Iran, and to note that FAA has advised U.S. civil aviation to exercise caution when flying into, out of, within, or over the airspace over Iran.

NVVV/Port Vila Runway 11/29 will be closed from 16MAR at 1300Z until 17MAR at 1930Z for maintenance. This essentially closes the airport during the time period.

Yxxx/Australia A reminder that Easter travel could be severly disrupted with Border Force and Immigrationstaff at international airports across Australia planning to take strike action on the eve of Good Friday.