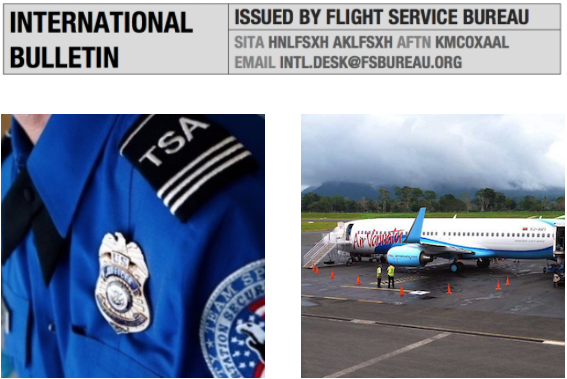 
TSA/eAPIS increase in US fines 03AUG Fines and penalties for getting your CBP Arrival/Departure manifest wrong will increase from 01AUG. That means, screw up the eAPIS and you are looking at a potential fine of $1,312. Read the article.

Vanuatu Runway concerns 03AUG Following interim repairs to the runway in Port Vila (NVVV/VLI) earlier this year, concerns have been raised once again about the condition of the runway, with diversions on Monday. Read the article.

LFPZ/Paris Airports Couple of upgrades in progress, LFPO has 06/24 closed until 29AUG, and LFPG is installing a new ILS until 03OCT; both will cause some delays.

YZZZ/Australia The Australian Border Force have announced a strike for Friday, 12 August. This marks a resumption of Industrial Action in Australia after a 3 month ‘ceasefire’ was agreed. The strike period is 24 hours, precise impact not yet clear, but AQIS/Biosecurity/Quarantine will also take part to some degree.

OMDB/Dubai is reopening with a single runway following a full airport closure early on 03AUG due to 777 crash.

UIII/Irkutstk has no air starter available for large aircraft until the end of August.Irkutsk is a common enroute diversion airport.

ZKZZ/North Korea is back in action with the missile launches again, on 03AUG they fired two ballistic missiles, one of which landed in Japanese waters inside the country’s economic exclusion zone. Another missile reportedly exploded immediately after the launch. The missiles were fired at 2250 UTC on 2 August from a region southwest of the North Korean capital city of Pyongyang.

VABB/Mumbai continues their Continuous Descent Approach trials in the TMA. Interestingly, part of the procedure calls for pilots to call in on 121.9 after landing and report the total amount of fuel saved (how do you work that out?), and then send a detailed brief by email to cdomumbai@aai.aero. We forecast a relatively empty inbox.

AGGH/Honiara has some surface damage on the International Apron, taxi slowly.

SBZZ/Brazil On 02AUG, the mayor of Rio de Janeiro declared 4 August a new public holiday for the Olympic Games. The extra holiday comes after the mayor has already designated 5, 18 and 22 August as public holidays in Rio de Janeiro, and after the city experienced severe traffic congestion with the implementation of Olympic-designated lanes. On 1 August, the Olympic tracks caused more than 60 mi/100 km of traffic jams, with the worst traffic taking place on the Linha Amarela.

DZZZ/Lome UTA Following changes last year to the airspace over Benin and Togo (the two long thin countries squeezed between Ghana and Nigeria) – there’s still some confusion over who does what. In simple: Low Level (FL240 and below) is controlled by Cotonou Approach. High Level (FL250 and above) is controlled by Lome ACC.

EGGW/London Luton will close overnight weekends in November for some big repair work.

HLLL/Tripoli FIR Airstrikes this week by the USAF

HEZZ/Egypt On 01AUG, reports announced that a semi-private company would take over responsibility for passenger and luggage screening at Sharm el-Sheikh International Airport (HESH/SSH). The same company, which is a joint public-private entity, will take over security at Terminal 2 of Cairo International Airport (HECA/CAI) beginning in October 2016 when the terminal is scheduled to reopen. The company will later take over screening procedures at Hurghada (HEGN/HRG), Borg el-Arab (HEBA/HBE), Marsa Alam (HEMA/RMF), Aswan (HESN/ASW) and Luxor (HELX/LXR) airports. Egyptian police will continue to be responsible for perimeter security around Egyptian airports, including the terminal and the tarmac.

LOWS/Salzburg starts a multilateration (MLAT) trial on 05SEP. Keep your Mode S on, they ask.

SBBZ/Brazil Olympic Games kick off in a few days, if you are operating to Brazil read through the current NOTAMS carefully, there are a bunch of flow restrictions, special routes, and procedures.

FABL/Bloemfontein is carrying out major works during August. Diversions not accepted. Jet A1 is supplied by bowser during this time, and not hydrant as this is also being worked on.

LTZZ/Turkey – post Coup. As of 01AUG, the situation in Turkey continues to stabilize, as the government continues to step up security measures and conduct operations to detain alleged coup plotters. Turkey remains under a state of emergency, which allows the government to drastically restrict civil liberties, and will likely remain so for the next three months. Raids and security operations are continuing throughout the country. Travellers should note that Turkish authorities have reportedly been conducting ID checks in the busier areas of Istanbul.    Demonstrations have continued over the past several days. While the threat of violence remains a concern at demonstrations throughout Turkey, most have been conducted peacefully. Travellers should nevertheless take care to avoid such gatherings as a precaution, because violence can occur with little notice. Additionally, terrorists have targeted major demonstrations in the past.

FLFI/Lusaka ACC have called out some AFTN addressing issues, if you are operating to land in Zamabia, then file to FLKKZAZX and FLHNZAZX respectively. OMMM/Muscat ACC has a radar-less day on 18th August, 0600-1700Z. Turn that TCAS up.

WADL/Lombok, Bali has reopened after a closure on Monday 01AUG due to the eruption of Mt. Rinjani. The last closure was in OCT2015.