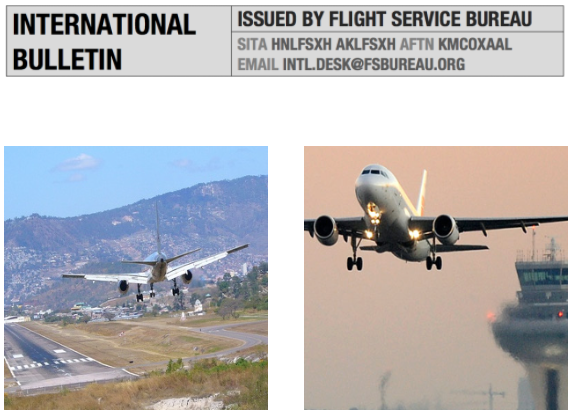 
MHTG ‘Interesting Approaches’ to end 06APR MHTG/Tegucigalpa Dangerous approaches at MHTG will be consigned to history, as a new airport was finally confirmed at the weekend by the Honduran government. Read the full article.

Greeks or Italians? ATC strikes this week 06APR There will be an ATC strike this week in Europe, maybe by Greece, maybe by Italy, maybe by both. These strikes are often cancelled shortly before starting, but at this pre-planning stage, it seems likely to go ahead. Read the full article.

EBBR/Brussels has now reopened but operations are still very restricted. The airport is not expected to be fully operational until June or July by current estimates. The airport authority has instituted new security measures that include a requirement for passengers to arrive 3 hours prior to their departure time. The terminal is still closed to busses and trains. Slots must still be requested from the Brussels Airport Authority if you intend to operate in or out of EBBR.

ZKPY/Pyongyang FIR Many reports that North Korea is jamming GPS signals, also reported by South Korea RKRR NOTAM A0450/16. Signals have been reported as unreliable or lost when operating in or near to North Korean airspace. Exercise caution if you rely on GPS in those areas. Read our DPRK Overflight Risk article from a few weeks ago.

LIZZ/Italy Eurocontrol has confirmed an Italian ATC strike is set for April 9th. NOTAMS A2062/16A2 and A2063/16A2 have been issued covering the proposed strike.

MHTG/Tegucigalpa Dangerous approaches at MHTG will be consigned to history, as a new airport was finally confirmed at the weekend by the Honduran government. Full article here.

LFXX/France an Operational Trial of CPDLC Services in French Airspace of Reims (LFEE), Paris (LFFF) and Marseille (LFMM) ACC will be in effect from 05APR to 11APR.

EZZZ/Europe The U.S. State Department along with numerous other countries have issued a Europe wide travel warning in response to the attack in Brussels. While extra vigilance should be exercised it is also a very generic response to a threat that has yet to be fully understood from a commercial aviation perspective. If you would like to be kept up to date on specific travel alerts from the U.S. State Department you can sign up through their STEP program.

EHAM/Amsterdam reports of near misses with drones have recently been reported by crews. The location of the near misses was on the approach path but no specific runway was mentioned.

KEWR/Newark The FAA will be increasing the number of available slots to EWR, available at the end of October. The change is in response to the improved efficiency of the airport and the ability to increase the ATC arrival rate.

FAA/United States has issued Advisory Circular 00-30C. It describes the various types of CAT (Clear Air Turbulence) along with avoidance techniques and possible future forecast systems for helping Dispatchers and Pilots in the planning stages.

KZZZ/USA Check your passport! Effective 01APR16, if you’re travelling to the United States under the Visa Waiver Program, you will also need to have a valid e-Passport along with your ESTA.

CZVR/Vancouver ACC will begin to use ADS-C on 18APR In their Oceanic sectors, for both alerting service (SAR) and improved ATC separation purposes.

OMZZ/United Arab Emirates will begin charging a $9.50 USD Passenger Tax effective 30JUN, to be imposed on all travellers over the age of 2 through all airports including those only transiting the UAE. A driving factor in this new charge appears to be low oil prices affecting the Gulf States.

UUZZ/Russia has stated that aviation authorities are intensifying its ramp inspections of all aircraft (especially foreign aircraft, we guess) in the wake of the Rostov accident.

FZZZ/Nigeria The Nigerian National Petroleum Corporation has stated that steps are currently being taken to end the countries fuel shortage, but may take upwards of 2 months. We suggest to check with local handlers for the availability aviation fuel supply until the issue is resolved.

VNKT/Kathmandu We have received some reports that VNKT ATC weather reports are inaccurate, especially regarding visibility. Any feedback please let us know.