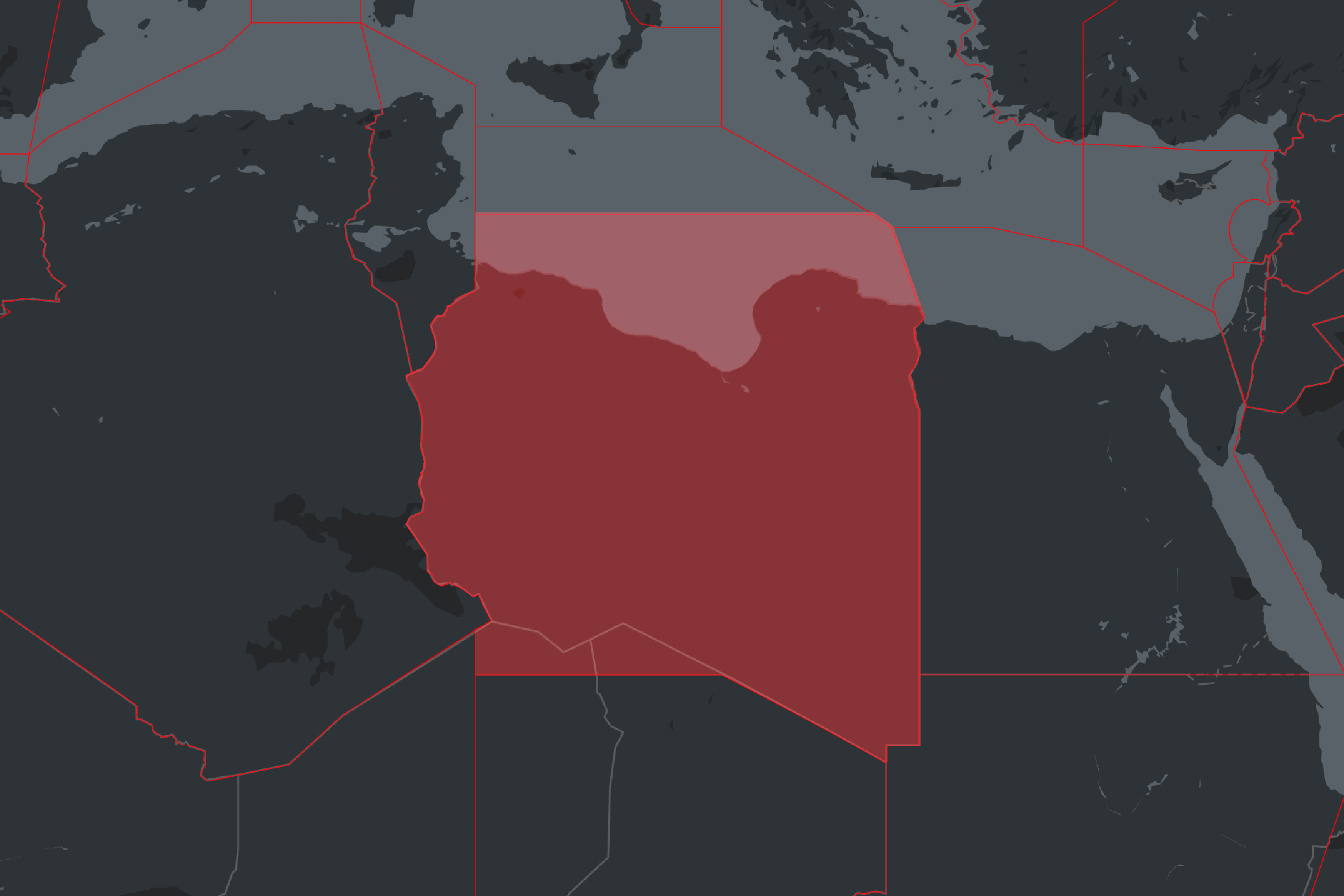 
On 23rd Oct 2019, the US issued an emergency order prohibiting U.S. operators from flying in Libyan airspace. The guidance here is very clear: do not operate anywhere in the HLLL/Tripoli FIR, at any flight level.

This follows months of civil war in Libya, with militia from the east mounting a campaign to seize control of Tripoli, including HLLM airport, and threatening to shoot down aircraft operating in western Libya.

In recent months there have been a number of airstrikes targeting HLLM/Mitiga airport, the latest coming on Aug 15, which reportedly killed two people and forced the airport to close. There are videos on social media showing planes landing at the airport as shells are falling in the background.

Prior to yesterday’s announcement, the U.S. guidance on Libya was that operators were allowed to overfly Libya at FL300 or above, except an area in the north-western part of the country over Tripoli, where all flights were prohibited. Here’s what that looked like: 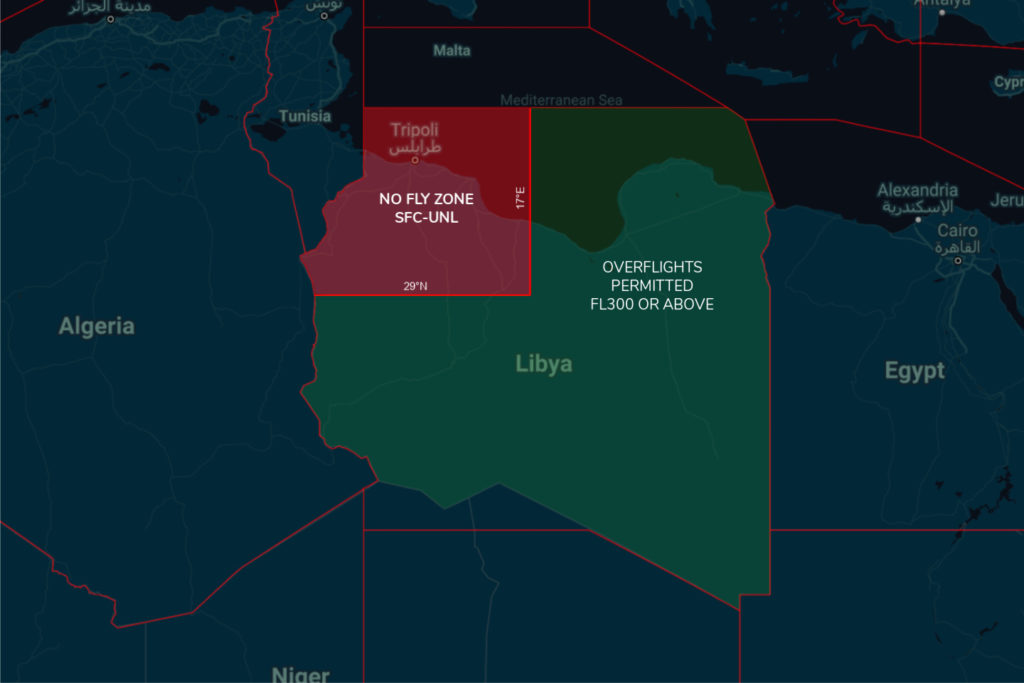 But this guidance is now defunct. The FAA website now shows the updated guidance for Libya – including the Background Notice.

Germany and Malta still have warnings in place which mirror the old advice of the U.S. – do not fly over the north-western part of Libya, but overflights of the rest of the country are permitted at the higher flight levels. The UK and France advise against all overflights. These warnings may be updated in the coming days, following the new advice from the U.S.

Libya remains politically unstable, with a fragile security situation across the country. In their SFAR issued back in March 2019, the U.S. said that the main threat to aviation at the lower flight levels stems from the widespread proliferation of man-portable air-defence systems (MANPADS) across the country:

“Both GNA and advancing LNA forces have access to advanced man portable air defense systems (MANPADS) and likely anti-aircraft artillery. These ground-based weapon systems present a risk to aircraft, but only at altitudes below FL300. LNA forces have tactical aircraft capable of intercepting aircraft at altitudes at and above FL300 within the self-declared military zone in Western Libya, which may present an inadvertent risk to civil aviation operations in Western Libya. While the LNA tactical aircraft threat is likely intended for GNA military aircraft, an inadvertent risk remains for civil aviation at all altitudes due to potential miscalculation or misidentification.”

However, there are factions on the ground in Libya which possess weapons capable of targeting aircraft above FL300. The LNA is one of many armed groups in Libya which continues to use various rocket systems looted from Gaddafi’s stockpiles at the end of the war in 2011. In May 2018, the LNA proudly displayed a refurbished Russian-made surface-to-air missile system at HLLB/Benina Airbase in Benghazi. This system has the capability to engage aircraft at altitudes up to FL450. 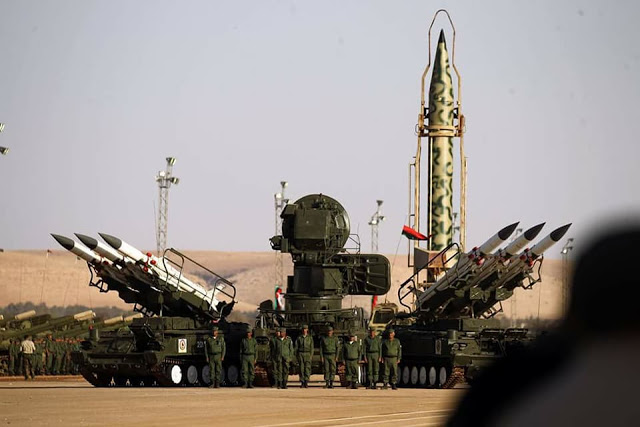 The opposing GNA forces have surface-to-air missile systems of their own. Some reports indicate that the GNA are in possession of the Russian-made SA-3 system, which has the capability to engage aircraft at altitudes over FL800.

With the current conflict between these and other rival factions on the ground in Libya now escalating, it’s not clear what level of control the main players hold over their missile systems.

Bottom line, there’s still a potential risk to aircraft at all altitudes and across all parts of Libya.

Even if you are allowed to overfly the country, there are only two approved routes available, in the far north-eastern corner of the country, as per HLLL Libyan Notam A0063/17: 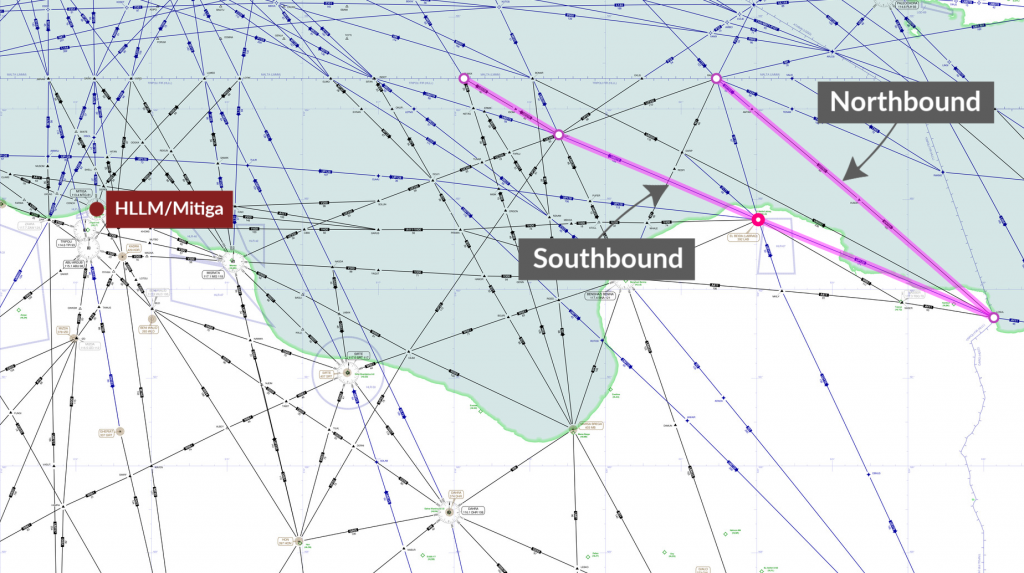 Even on these routes, reliable ATC services cannot be guaranteed. The past few years have seen regular ATS and radar outages across the HLLL FIR airspace, and severe limitations in VHF capability, with operators having to communicate with Malta ATC for guidance.

Given the current security concerns, we continue to list the entire country as “Level 1 – Avoid” at SafeAirspace.net