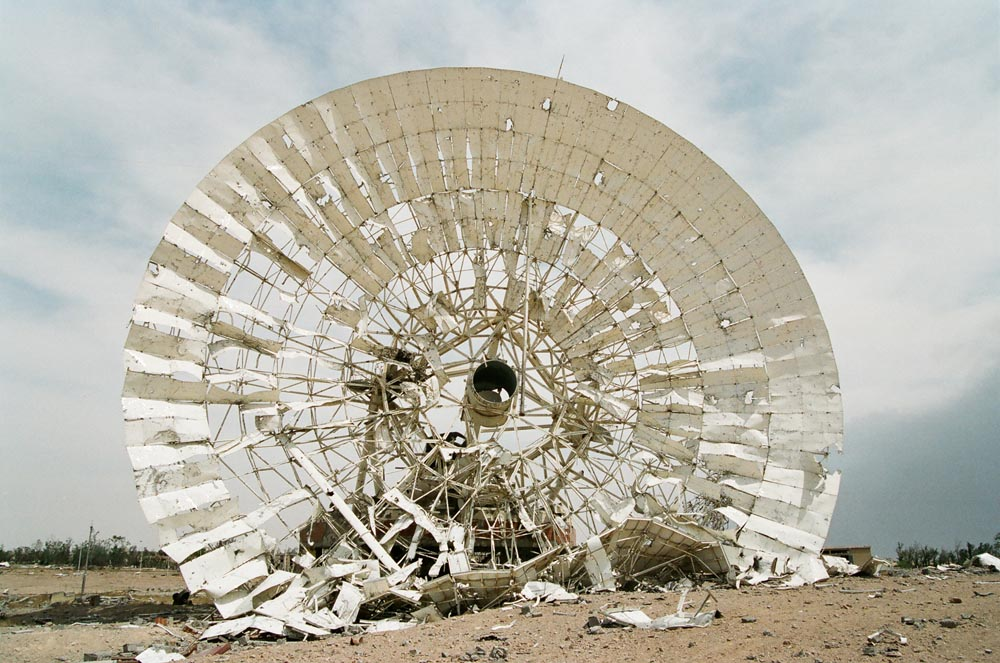 GPS U/S in the US

GPS U/S in the US


We have written a fair amount on worldwide GPS Jamming issues. Here is what we said about it in ‘GPS Jamming: All the Wrong Signals’. But there is another GPS problem though which is a little closer to home (if your ‘aviation’ home is in the US anyway).

Let’s take a step back to 2017, when the NBAA and a bunch of other stakeholders took part in the 2017 RTCA tactical operation committee. That’s the Radio Technical Commission for Aeronautics and they are great – they try and help find compromises amongst the competing interests on critical aviation modernization issues.

One of these very issues is with GPS.

The FAA’s NextGen modernization program is using more and more GPS ‘stuff’. Stuff that is critical for commercial flight operations safety and efficiency. The US Department of Defense on the other hand is sort of doing the opposite – they are running GPS Jamming tests which are critical for National Security and the big problem with this is that the jamming tests often interfere with the GPS signals civil aircraft are using.

After they talked about it in 2017, the compromise was that the DoD will notify the FAA at least 120 hours before any planned tests. This should give the FAA time or put out Notams to warn crew and operators. 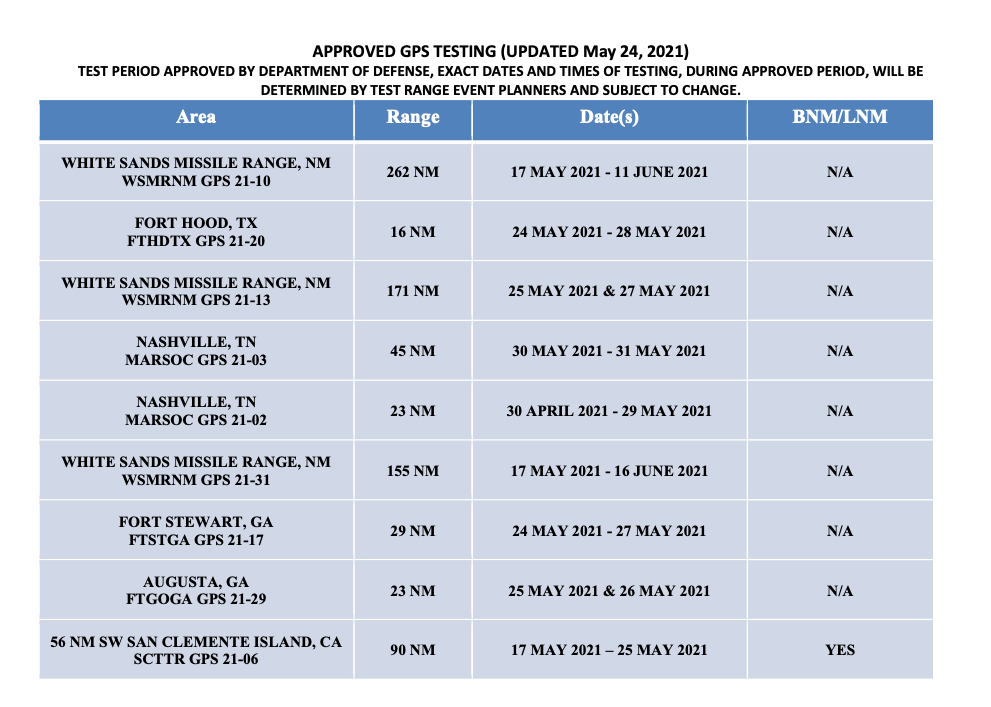 The May 2021 testing schedule

Unfortunately not. The 120 hours notification is given, but the information which filters down to the pilots and operators who need to know about it often not sufficient. One of the difficulties is that the Notams have to provide information on different outage locations and this means loooooooong Notams filled with lots of Lat and Longs and times and dates. And this means critical information can sometimes get buried inside and makes it difficult or confusing for the crew to find it, extrapolate it (or even be aware of it in the first place).

Well, the NBAA have reported on this, and say that the FAA are taking their concerns onboard. They plan to revisit the idea of producing visual representations of the outage areas. These will be much easier to digest than lines of lat and longs, and would hopefully enable crew to use them in conjunction with planning apps in the future.

There has also been a reminder issued to crew asking them to report outages and issues. If you find yourself in a jammy area, let ATC know. Tell them what you have lost so that they can warn other aircraft in the immediate area. The reminder has been sent to ATC as well because in the past, when aircraft have made these reports, the information has not always been shared out to other operators in the near vicinity.

What do you need to look out for?

What an outage means, practically, is interference to the GPS signals which your navigation system is using. The result can be a degradation in accuracy, or a full loss of the system (GPS primary).

If you are enroute, let ATC know your capability has been degraded so you can get the support you need to continue navigating safely.

Some aircraft are particularly sensitive to disruption in the GPS signals, and it can lead to you losing that system until it is reset on the ground. This means RNAV/RNP approaches might not be flyable anymore. Having an awareness of what this means for your aircraft is important. Think about your plan B for approaches in case you do loose GPS navigation capability.

Notams are out there and it might be frustrating picking out the areas which could impact you, but knowing about the outage spots in advance will help. 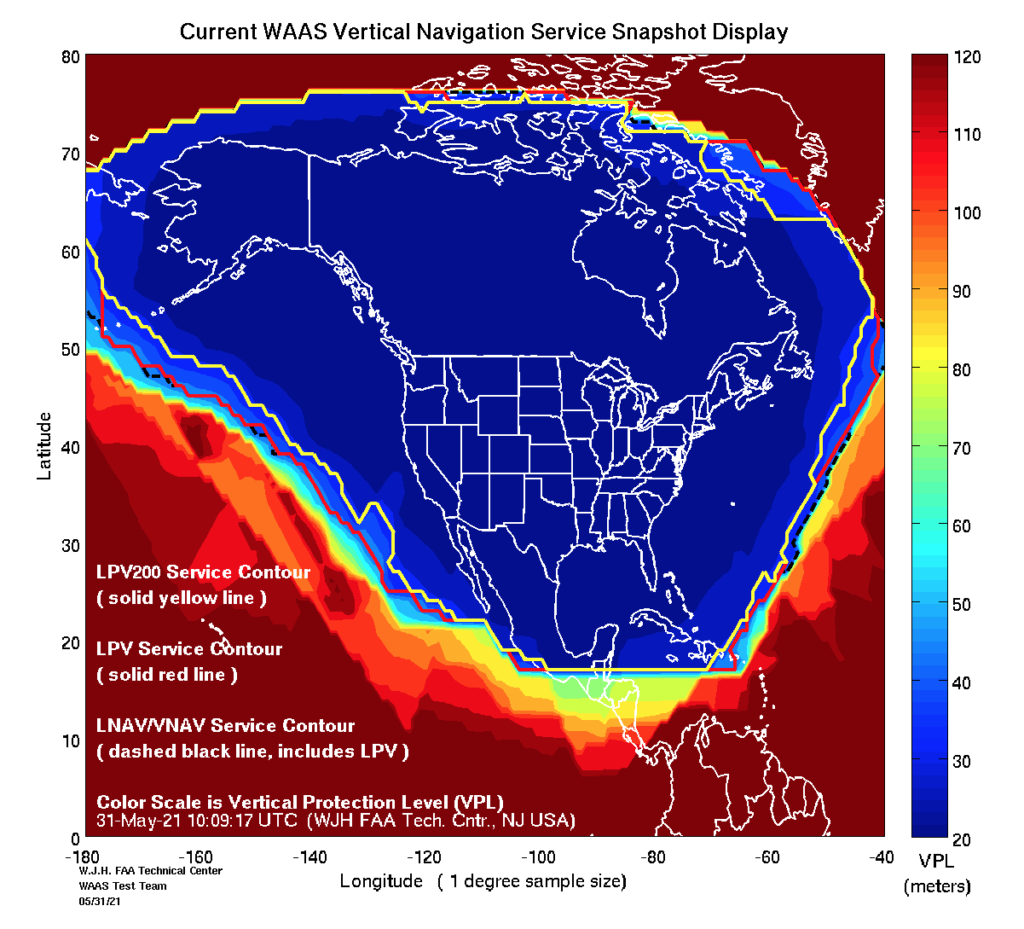 A display of WAAS services

Where can you look for info?

We thought we’d throw in a little update in on this as well.

Last year we saw increasing concerns about possible interference from 5G networks because they operate on the same slice of radio spectrum usually reserved for Radio Altimeter signals (the 3.7-3.98 GHz band).

The big concern here is that interference could result in degradation of accuracy from spurious emissions, or outright failures in the radio altimeters. Not sure how much of a risk that means? Well, Turkish Airlines TK1951 crashed in EHAM/Amsterdam Schiphol in 2009 and one of the primary factors was attributed to a malfunctioning radio altimeter which sent an erroneous -8ft reading to the autothrottle system, commanding it to idle.

The NBAA are fronting a campaign here as well. Twenty organizations have joined forces to send the FAA a letter raising their concerns over this, in response to a report issued on March 3 that they don’t feel addresses the threat with enough analysis.

You can read the letter here.

Military aircraft and UAVs are also at risk here. Their radio altimeters use the same C-band frequencies, but they tend to fly a lot nearer the ground a lot more often. A very good summary of the issue can be found here.