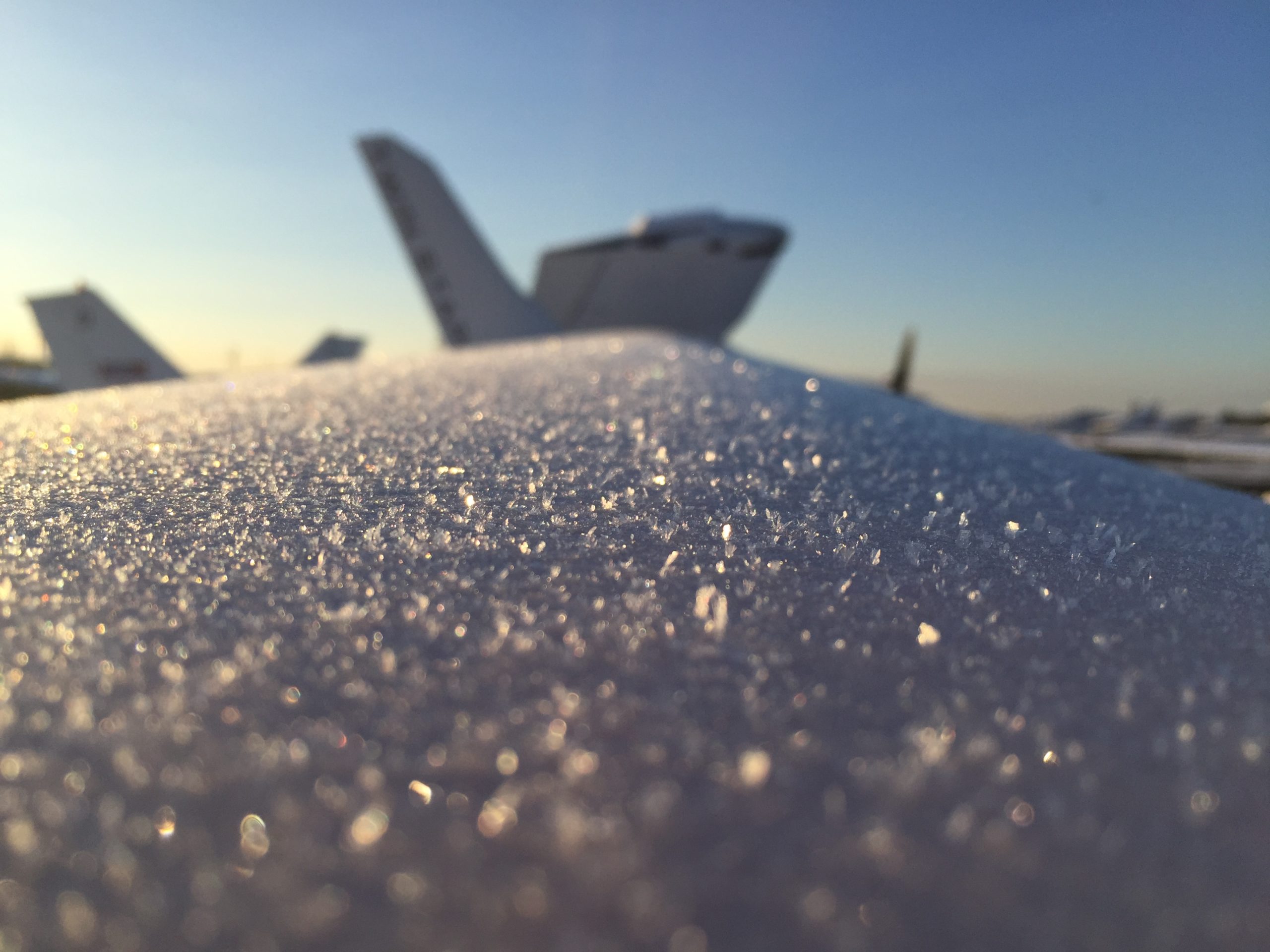 
On November 11th this year, a regional jet slid off a snow-covered runway in Chicago.

What made this event unique was that the entire incident was caught on video from a passenger onboard the aircraft. Although no probable cause has been published yet, it does serve as a stark reminder of the challenges of operating in the winter season. While every operator and aircraft will have their own specific procedures, here are 5 golden rules that could help you stay out of trouble during these colder months.

Winter ops can be expensive, especially because de-ice and anti-ice fluid is a costly commodity. If the weather outlook indicates snow or frost, a good idea is to book hangar space ahead of time to keep the aircraft out of the inclement weather. This will be vastly cheaper than a steep de-ice bill. If you didn’t manage to spot the weather ahead of time, just pushing the airplane into a hangar before flight can melt a lot of ice and snow adhering to the aircraft. 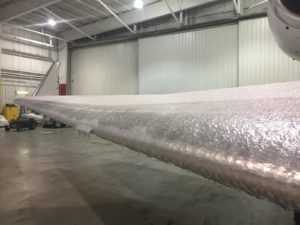 Story time: Once upon a time in Teterboro Airport (KTEB) a Gulfstream crew was set to begin their trip on a non-passenger reposition flight down to Florida. It was a beautiful, crisp winter evening, with clear skies ahead. Unfortunately, the airplane that they were assigned to had been sitting outside on the ramp for nearly a week and was covered in several inches of ice and snow. There had been several days of continuous of heavy freezing rain and snowfall during the week it was left outside by the previous crew. Initially, the inclination was to de-ice the airplane so they could depart as soon as possible. However, after an inquiry with the FBO, the amount of de-ice fluid required to clear the airplane was estimated at $40,000. Instead, the crew devised another plan to help save the company’s resources. They inquired, and subsequently received, heated hangar space for a mere $700. After a few hours of defrosting, the airplane was completely clean and dry of contaminants. What’s more is that ultimately the FBO waved the $700 hangar fee, saving the company a whopping $40,000. A win for everyone all around.

#2 – Limitations you didn’t worry about in summer 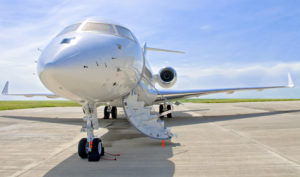 Clearance from the door to the ground is dependant on strut extension.

Landing gear struts may compress and sit lower due to the colder temperatures. When walking out to the aircraft, check the strut height before opening the door. In normal conditions there may only be a few inches of clearance between the door and the ground. However, with a very low nose strut, it may result in the aircraft door coming into contact with the ground when it opens. Similarly, as the aircraft gets heavier during the boarding process, the struts will compress and the fuselage may sink closer to the ground. For aircraft that require mobile air stairs, ask the rampers to lower the mobile air stairs an extra inch or so to allow for this compression.

However, these issues can largely be mitigated on post-flight inspections. If the struts look low, call Maintenance to charge it up before your next flight. The process of recharging gear struts can take up to an hour in ideal conditions, so the sooner it is caught, the less disruption it will cause.

WATER LINES
Unless you fly for an airline, it falls upon the flight crew to remember to drain all the water tanks and purge the lines if the aircraft is being left to sit in freezing temperatures. When water freezes, it expands, which can cause the plumbing systems in aircraft to burst. This can result in significant and costly repair jobs. A good rule of thumb is to purge the water system anytime the temperature will be less than 3C at any point during the layover. Ensure all crew are in the loop, including the Flight Attendant, by instigating a cold weather brief before departure, and again when you’ve copied the destination’s ATIS. “It looks like the temperature is -2 Celsius at our destination, so we will plan on draining the tanks and lines. Can you complete that while I conduct the external walkaround and offload bags?” Even if the temperature is above 3C when you land, check the outlook overnight.

Don’t forget to empty water from the Nespresso/coffee machines and remove carbonated beverages!

Once you’ve been de-iced, there’s that warm fuzzy feeling that you’re finally on your way. But you’re not quite out of the woods yet–is your de-ice fluid holding up? The clean aircraft concept requires that your aircraft be free of all frozen contaminants before take-off. When there’s even a sliver of frost or if precipitation is re-accumulating after anti-icing, you’re already in unknown territory, aerodynamically speaking. Your final determination on whether the aircraft is clean will be through a Pre-takeoff check or Pre-takeoff contamination check. Which are you approved for? (AC 120-60B).

PRE-TAKEOFF CHECK
Pre-takeoff check (typically used in Part 121 operations) is to be completed by the pilots within 5 minutes of crossing the hold short line. Pilots will visually check the representative surfaces to ascertain whether the aircraft is still free of contaminants (for the Embraer Legacy/145 these are the windshield wiper arm and blade and the visible portion of the leading edge of the wing). If necessary, hop into the back and check the wings from the cabin windows.

This check is only done from the comfort of the aircraft and does not allow you to exceed a holdover time! You’re simply checking the integrity of the fluid and looking for contamination before you try and fly that wing. If the aircraft does not appear totally clean then, regardless of whether you’re within the holdover time, its back to the de-ice pad.

PRE-TAKEOFF CONTAMINATION CHECK
Predominantly, Part 135 operators who don’t employ 121 procedures for ground de-icing will use the pre-takeoff contamination check. Here, holdover tables are “advisory only,” so in lieu of a hard cut-off time the crew conducts their own assessment of whether the wings and control surfaces are free of frost, ice, or snow. This, too, must be completed within 5 minutes prior to crossing the hold short line, and may be tactile or visual, as long as the crew can ensure the absence of contamination.

As a reminder, if anti-ice fluid fails, you cannot re-apply another coating of Type IV. You must first use de-ice (Type I) to clear off the failed anti-ice fluid from the airplane before re-applying Type IV.

KNOW YOUR LIMITS
For the following conditions, no holdover times exist:

In these cases the anti-fluid does not have the capacity to eliminate the precipitation for very long, if at all. Take FZRA, for instance. When rain from a layer of warmer air above falls through a layer of colder air below, it becomes supercooled. Upon impact with cold surfaces the water will freeze, becoming clear ice. In active freezing rain conditions, this ice is notoriously difficult to keep from forming on the skin of the aircraft. Perhaps more insidious is that clear ice is hard to detect visually, especially in the dark, and usually warrants a tactile check.

It goes without saying, but we will say it anyway – if you cannot ascertain that the aircraft is clean, do not takeoff. And if your fluid looks like this, do not takeoff! 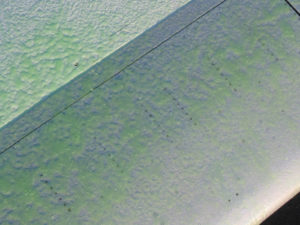 If you feel like indulging in some reading, have a look at NASA ASRS Directline issue 5 on de/anti-icing mishaps. Although it’s from the 1990’s, it helps give crew some awareness of the difficulties that can be faced in winter. Events include, but are not limited to, crew that were inadequately sprayed by the de-ice crew, only half the aircraft being sprayed, encountering fluid failure and engine failure caused by snow ingestion on takeoff.

#4 – Expect to be faster in descent

If you are descending through icing conditions, plan ahead. With anti-ice on, the engines spool up, in order to produce sufficient bleed air for the anti-icing systems. This makes descent and deceleration much harder. If you have altitude or airspeed crossing restrictions it pays to start down a little earlier than usual. Don’t be reluctant to tell ATC if you’re unable to make a speed and/or altitude restriction.

#5 – Be careful with reverse thrust

A common construction typical of business jets is that they are designed with aft mounted engines and a T-tail design. Because of this design, reverse thrust in excessive amounts can deflect air forwards of the engines, disrupting the airflow upstream from the rudder, and thus reducing rudder effectiveness. This is sometimes referred to as “rudder blanking.” This is the last thing anyone needs in a crosswind on a contaminated runway where steering effectiveness is already compromised. Several accidents have occurred as a result of pilots using too much reverse thrust on contaminated runways, perhaps the most notable of which was an MD88 in LaGuardia, NY (KLGA).

In a nutshell, flying in winter requires careful planning, good judgement and good execution. But don’t feel daunted! There are plenty of resources online, and remember: always plan ahead, expect things to take longer – much, much longer – than usual and don’t blindly trust the anti-ice fluid.

Merry Christmas and safe flying! If there is anything to take away from this article, it is: don’t de-ice like this…