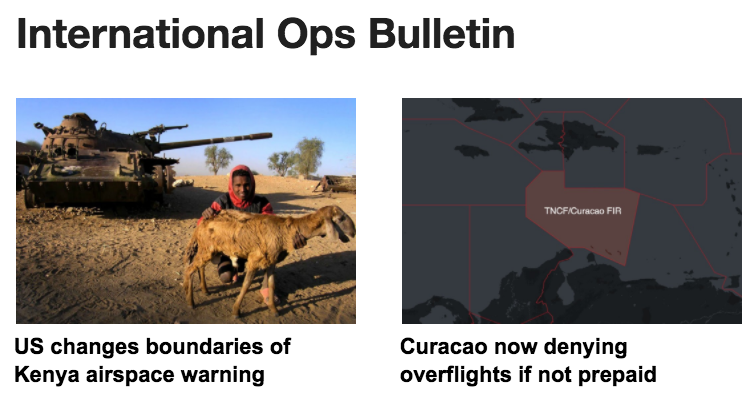 ORZZ/Iraq The Iraqi central government have extended the ban on international flights to the Kurdish airports ORER/Erbil and ORSU/Sulaymaniyah to the end of May 2018. They say the ban will only be lifted when the Kurdistan Regional Government fully hand control of the administration of the airports back to the federal government.

EZZZ/Europe Expect travel disruption across Europe until at least Mar 2, due to a plume of cold air blowing east from Russia. France, Ireland, Italy and the UK have been particularly affected. The Siberian weather system has brought sub-zero temperatures and heavy snow and ice – impacting air, rail and road transport.

GAZZ/Mali The U.S. have extended their Mali airspace warning to the end of Feb 2019 – avoid flying over or into Mali below FL260. If you plan to do so, notify the FAA 3 days in advance.

VTSG/Krabi Expect delays until the end of March, as they’ll be working to repair some cracks and holes on the runway caused by recent flooding. Don’t expect to be given permission to park for more than a few hours, as priority is being given to scheduled flights.

LPAZ/Santa Maria There will be no airport METAR/TAF provided between 01-07z each night until the end of March, due to staff shortage at the Santa Maria CMA MET service.

HAZZ/Ethiopia There is still an issue with traffic entering the HAAA FIR at waypoints MANDA (on the boundary between Eritrea and Djibouti) and PARIM (on the boundary between Yemen and Djibouti). Addis ATC controls Djibouti’s airspace here, and they say they do not recognise airway W180, and that UA451 is closed within Ethiopian airspace. So don’t use those routes, as ATC won’t accept any traffic due to safety concerns.

EHZZ/Netherlands A reminder that all CPDLC-equipped aircraft which enter Maastricht Upper Area Control Centre (MUAC) airspace must log on to EDYY as a secondary means of communication. That means anywhere above FL245 in the EBBU/Brussels UIR, EDVV/Hanover UIR, or EHAA/Amsterdam FIR. Aside from it being mandatory, if you’re equipped and logged-on, you’ll probably get a slightly better service in terms of requested levels/directs. If you want to chat with them about this, you can email muac.datalink@eurocontrol.int

VRMM/Malé The airport will continue to be closed overnight from 19-01z until Sep 30, for runway renovation that has been taking place since 2016.

LTFJ/Istanbul The airport will continue to be closed for repair overnight until the end of Oct. Slightly different times depending on the day of the week – more or less 2200-0330z. The other airport in Istanbul is LTBA – that remains open overnight, but expect it to be busy.

LFPG/Paris Charles de Gaulle The Runway Status Light System, with Take-off Hold Lights (THL) and Runway Entrance Lights (REL), is now operational. Pilots should remain clear of the runway when a REL on a runway access is illuminated red, and they should not take-off when a THL in front of them is illuminated red.

VOGO/Goa Very busy until mid-May, when the winter season ends. Until then, there’s no overnight parking available for BA/GA flights. Drop-and-go’s are ok, but you need to get approval from the airport at least 48hrs in advance. Additionally, the airport is closed to all civil aviation from 03-07z & 10-11z Mon-Fri.

AYZZ/Papua New Guinea A 7.6 magnitude earthquake hit central Papua New Guinea on Feb 25. The extent of the damage is not yet clear, but regional AYXM/Komo Airport is now closed as half of the airfield has been destroyed. The earthquake did not affect the capital, Port Moresby, where the country’s main international airport (AYPY) is open and operating as normal.

UTAV/Turkmenabat A new international airport has opened at Turkmenabat city, with a 3800 meter long runway. Foreign aircraft need special permission to operate there though, and it can’t be used as an alternate.

HEAX/Alexandria Until at least the end of May 2018, no more international flights are allowed – the airport is for domestic and Egyptian military use only.

DNAK/Akure Cows on the runway is now almost a daily occurrence! The airport has no perimeter fence, so wandering herdsmen and their cattle have had unhindered access to the airport, and the authorities have so far been reluctant to tackle this problem as they are eager to avoid conflict with the herdsmen!

ZYHB/Harbin Overnight parking not available for GA/BA aircraft until May 23, due to stand shortage.

EIDW/Dublin The longer runway (10/28) will continue to be closed each night from 21-05z on an ad-hoc basis until April. During these times, the shorter runway (16/34) will be open, but they’ll use 16 for both take-offs and landings – the LDA will be 1692m, and temporary runway end lights will be installed.

LEIB/Ibiza If you have to park on the commercial apron, there’s a max limit of 3hrs for GA/BA aircraft between Mar 5-24.

WIZZ/Indonesia Poor visibility expected over the next few weeks across the Sumatra and Kalimantan (the main two big islands in Indonesia) due to seasonal haze caused by land and forest fires. In recent years, this has led to flight cancellations at airports across the region.

LIBD/Bari The airport will be completely closed from Feb 28 until Mar 9 for runway maintenance. During the closure, the majority of flights serving Bari will be redirected to LIBR/Brindisi Airport, around 80 miles (130km) to the south-east.

NFTF/Tonga Cyclone Gita caused serious damage to Tonga, it’s been recommended that travel there is avoided. There’s an ongoing curfew from 20-08 local time in the central business district of the capital Nuku’alofa, which has been extended until Mar 5. In addition, a nationwide state of emergency is in place until 12 March to aid ongoing relief and reconstruction efforts.

EDZZ/Germany Sectors of airspace over southern Germany are ahead of schedule with plans to bring in Free Route Airspace (FRA). With effect from 1st March 2018, FRA will be implemented in the EDUU/Karlsruhe UAC, EDWW/Bremen ACC, and EDMM/Munchen ACC above FL245.

OEZZ/Saudi Arabia New rules coming in for foreign-registered aircraft based in the country. You’ll now need to register under a commercial Aircraft Operators Certificate if you want to do charter flights, or an Operator Certificate for private flights. Aircraft which do not join an AOC or OC by 1st March 2018 will not have their Saudi annual landing permits renewed, and will effectively be grounded.

HLLS/Sabha The airport has been closed since 2014 due to fighting in the area. A new Notam has been issued which officially extends the closure period to May 15, as talks continue between the authorities and local groups to find a way to re-open the airport.

WARR/Juanda The airport will be closed for everything except medevac helicopter ops, every night from 16-22z until Apr 3.

LFMH/St Etienne The de-icing equipment at the airport is out of service, so no deicing available until Mar 11.