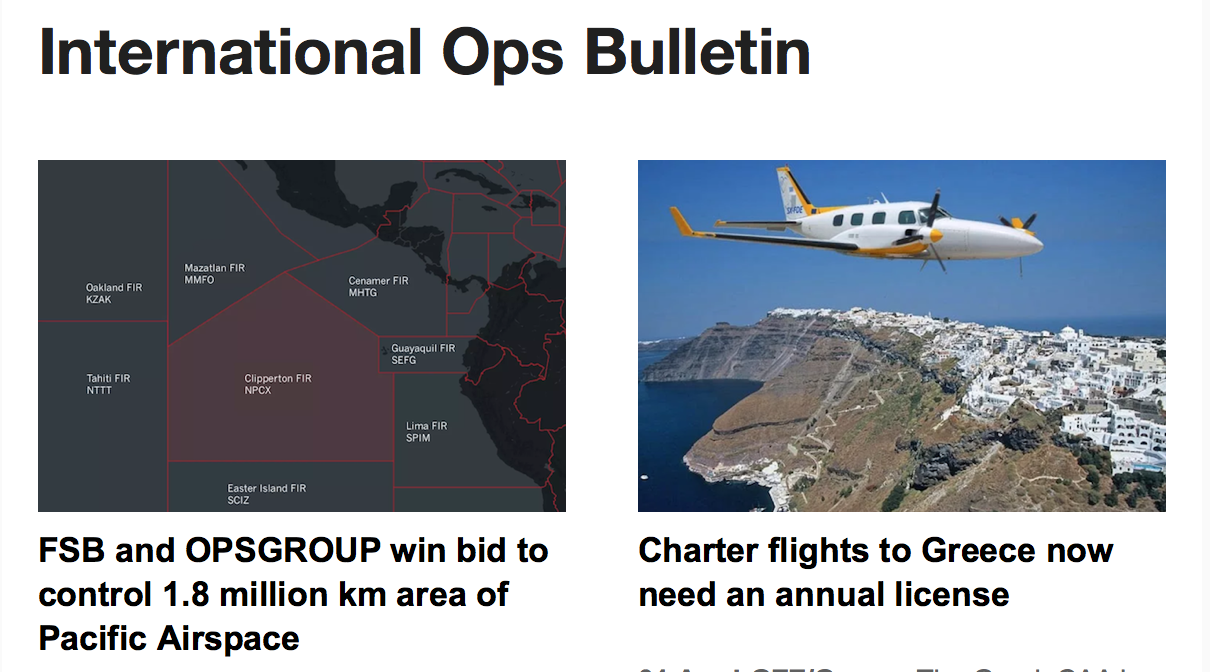 
Weekly International Ops Bulletin published by FSB for OPSGROUP covering critical changes to Airports, Airspace, ATC, Weather, Safety, Threats, Procedures, Visas. Subscribe to the short free version here, or join thousands of your Pilot/Dispatcher/ATC/CAA/Flight Ops colleagues in OPSGROUP for the full weekly bulletin, airspace warnings, Ops guides, tools, maps, group discussion, Ask-us-Anything, and a ton more! Curious? See what you get. Rated 5 stars by 125 reviews.
TNCM/Saint Martin The airport’s commercial terminal was heavily damaged by Hurricane Irma in Sept, and once the airport reopened to commercial flights in Oct, all arriving aircraft were having to be processed through the FBOs instead. But now temporary arrivals and departures facilities have finally been opened for commercial flights, so the FBO’s will return to exclusively supporting private aviation again.

NPCX/Clipperton Oceanic OPSGROUP finally has its own airspace. We’re delighted to make public, after 18 months of negotiation with the local Department of Civil Aviation (DCA), that control of the Clipperton FIR has been assigned to FSB. Operations commenced last night at 2359Z. Read our article, or the official Press Release on the DCA website.

FMCZ/Mayotte Civil unrest and an indefinite general strike continues in Mayotte, with protests and roadblocks on major roads including those around the airport, as well as the capital, Mamoudzou.

SCZZ/Chile ADS-C and CPDLC are now available for FANS-1/A capable aircraft across all of Chile’s oceanic FIR’s (SCIZ/Isla de Pascua, SCFZ/Antofagasta, SCEZ/Santiago, SCTZ/Puerto Montt, and SCCZ/Punta Arenas), except on airways UL302, L302, UL780, and L780. There’s a single CPDLC logon code for all these areas: SCEZ.

LFZZ/France Another ATC strike has been announced, this time just for the LFMM/Marseille ACC, from 04z on Apr 7 to 04z on April 9. If the strike goes ahead, overflight traffic should route around the LFMM sector during this period.

LEZZ/Spain CPDLC is now available above FL285 across Spanish airspace for CPDLC ATN VDL Mode 2 equipped aircraft. The logon code for the Madrid FIR is LECM, and for the Barcelona FIR is LECB.

TTZZ/Piarco CPDLC is out of service until the end of March. All voice comms must be made via New York Radio. Aircraft are requested to log on to TTZP for ADS-C position reporting. Also, include the AFTN address KNYCZZZX when filing your flight plans.

OEZZ/Saudi Arabia The Saudi government have confirmed that on Mar 25, seven ballistic missiles were fired toward Saudi Arabia from within Yemen. The rebels said they were targeting OERK/Riyadh Airport and other sites in the capital. All seven missiles were intercepted and destroyed, although one person died and two more were injured by falling fragments of one missile over a residential neighbourhood in Riyadh.

DNZZ/Nigeria Workers’ unions in the aviation industry have threatened to shut the airspace and ground all flight activities in protest against the Federal Government’s refusal to pay pension money owed to Nigeria Airways ex-workers. This “indefinite industrial action” is due to start on Apr 2, unless an agreement is reached.

OPRN/Islamabad Ongoing fuel supply issues. There’s a Notam out that says all aircraft must currently tanker in sufficient fuel for their outbound flight.

ZZZZ/Worldwide ICAO will raise the weight threshold requirement for hardened cockpit doors for aircraft with 19 or fewer seats from 100,310 pounds (45.5 metric tons) MTOW to 120,152 pounds (54.5 metric tons). This means that current and future ultra-long-range business jets, including the G650ER and Global 7000 will no longer need to meet this requirement. The new standard will become effective Jul 16, 2018, and applicable to member states in Nov 2018.

DTZZ/Tunisia The strike by ATC Technicians originally planned for Mar 23-25 has now been rescheduled for Apr 6-8. They postponed it to facilitate further talks between participating unions and employers over a range of grievances. If the strike goes ahead, it is not yet clear whether specific airports will be affected.

OEZZ/Saudi Arabia On Mar 22, Air India made history by becoming the first commercial flight to be allowed to use Saudi airspace, on a route between VIDP/Delhi and LLBG/Tel Aviv. However, Israeli flag carrier El Al has not been given similar permission, and must still take a more circuitous path to avoid Saudi Arabia, adding hours to the flight time.

KZZZ/USA With the roll-out of PBCS coming on Mar 29, the FAA requires N-reg operators to update their A056 LOA authorization, but they are delaying the renewal deadline to Sep 30 for private (Part 91) operators only. Notice N 8900.445 has now been updated, and is available here: http://fsims.faa.gov/wdocs/notices/n8900_455.pdf

VICG/Chandigarh Following a similar closure in Feb, the airport will be completely closed for more runway extension work from May 12-31.

KORD/Chicago RWY 15/33, one of the airport’s longest runways since O’Hare opened, will close permanently on Mar 29. After that, most traffic requiring extra-long runways will then be shifted to east-west runways 10L/28R and 10C/28C. Some of the pavement lane of runway 15/33 will survive as a taxiway (“Sierra-Sierra”).

EKZZ/Denmark A strike threat from the meteorological service and ATC could end up paralysing air traffic in Denmark, if an agreement is not reached before Apr 4. If this were to happen, internal flights in Greenland would also be suspended – as airspace here is also run by the same authority.

HUEN/Entebbe Uganda’s Civil Aviation Authority has announced that it has launched an investigation into extortion activities by airport staff following a reported incident on Mar 18, where ground handling staff are alleged to have prevented a passenger from boarding a flight to China because he had a one-way ticket and lacked proper documentation, unless the passenger paid a fine of 200 U.S. dollars.

VRZZ/Maldives A state of emergency that had been in place for 45 days amidst political unrest was lifted on Mar 22. There are still some travel advisories in place for the capital Male and Addu City (Addu atoll), but disruption is not expected anywhere else – even throughout the duration of the state of emergency there were no reports that any of the outlying islands, resorts or VRMM/Malé International Airport were affected.